Shakespeare and Stratford-upon-Avon in World War 1 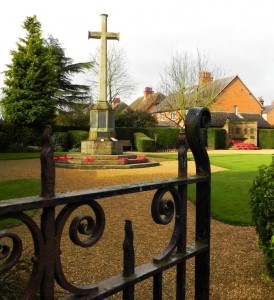 In Stratford, as in towns all over the UK, events are being held marking the beginning of the First World War. At Hall’s Croft, close to the peaceful garden containing the town’s War Memorial, a small exhibition has just opened that aims to connect memories of local events and people with Shakespeare, whose work was and still is used to encourage patriotic fervour, to rally troops in conflict, to comfort those in grief, and to bring harmony.

Among the sad photographs of young men in uniform, the medals, the telegram bringing the news of a soldier’s death, I was particularly struck by a book, Cecil Eldred Hughes’ 1904 compilation The Praise of Shakespeare. The book had belonged to Captain G P Tregelles, killed in action 1 July 1916. While an undergraduate, in 1912, the young man had visited Stratford and the Shakespeare Memorial Library where W Salt Brassington had shown him some of the “treasures” contained in the theatre’s collections. Captain Tregelles had left instructions that if he was killed, he wanted his book to be sent to the Library. He placed so much value on it that he wanted to ensure it would be enjoyed by others.

In his letter, his father summed up to terrible cost of war: “My boy had an active original mind and took a keen interest in literature… Had he lived he might have done some good work in that line”. So much promise, all lost.

Another Shakespeare book that had significance for soldiers in World War 1 was the Kitchener Shakespeare, a copy of which is also on display. After Lord Kitchener’s death in 1916 a fund was set up, the money raised to benefit those disabled during the war. Each man was to receive a collected edition of the works of Shakespeare, in the hope that they would be “a source of pride and satisfaction, a source of genuine and personal gratification, a source of genuine and personal solace”. It’s hard for us today to imagine how this could have seemed an appropriate gift. 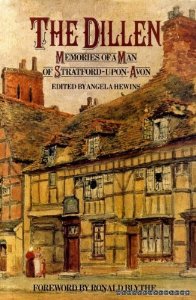 George Hewins, a Stratford man who received a copy, was clearly not impressed. Handicapped after being seriously wounded in battle, and desperately short of money, he remembered the event years later: “He gave me a book: The Complete Works of William Shakespeare: a book! Somebody had writ inside: “It is hoped that this will always keep you in mind of the true greatness and glory of the cause for which you have fought and suffered”.

My own strongest impressions of wartime Stratford come from the book I’ve just quoted, The Dillen. It began as an oral history project in which Angela Hewins and her husband, the grandson of George Hewins, interviewed the old man over three years in the late 1970s. Angela went on to shape this mass of material into a chronological account. It presented a completely unknown side of Stratford. Hewins had been born in the workhouse, and was one of the poorest people in Stratford, a town undergoing gentrification. George and his family lived a hand to mouth existence, though he became a skilled bricklayer able to support his eight children. This didn’t stop him being sent to the front where he fought and was hit by a shell.
There was going to be a big battle. We could smell it. We could smell the ammunition coming up….As soon as they started to bring up jars o’rum for us, we knowed that we’d be in it… Half-past-five under cover of a barrage, we went…It was busting everywhere. There was only about a hundred yards between us as Jerry… I moved quick. It was hand-to-hand fighting. We wasn’t drunk, but we was awkward. They’d given us enough rum to make us awkward. 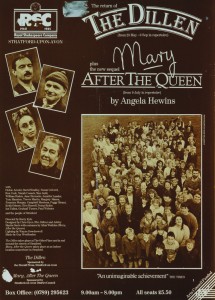 The RSC poster for The Dillen

On returning home George suffered terrible nightmares: “I fancied I was still in the trenches, with the rats running all over: swarms o’rats with yella eyes and big fat bellies… I used to get off the seat and crouch underneath it, eyes shut, hands over my ears”. When he finally managed to get a job his pension was severely cut leaving him as badly off as ever.

In the 1980s, following the publication of The Dillen the RSC decided to stage the book as a play, using the town itself as a backdrop. Ron Hutchinson’s brilliant adaptation was staged in 1983 and again in 1985. Beautifully directed by Barry Kyle, the stroke of genius was to use 200 townspeople to act as extras, binding the town to the theatre as it hadn’t been for decades. It began and ended at The Other Place, but in between the cast and audience moved around the oldest part of the town, encountering pea pickers in a field, a scene with Half-Pint Ginny on a disused railway track, a music hall scene that moved George on from being a carefree lad to father of eight. After the interval the audience huddled in a tent as we saw and heard the explosions of WW1 across darkened waste land. Then we formed a torchlight procession, walking through the quiet streets where costumed figures stood on doorsteps, and as we passed the war memorial the names of the fallen were read out. It was eerily atmospheric. 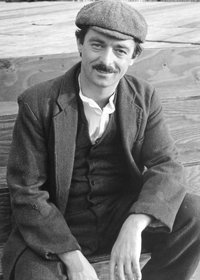 The cast was led by the always excellent Ron Cook, with Peggy Mount playing his aunt Cal. The production came just in time – the disused land has since become a housing estate and the town’s Southern Relief Road. But I can’t be the only person who would love to see a revival of The Dillen in some form.

If you would like to read more, I recommend Nicholas Fogg’s book Stratford, A Town At War, 1914-1918, and the Hall’s Croft exhibition Cry “havoc!” And let slip the dogs of war continues all summer.