W B Yeats and Stratford-upon-Avon 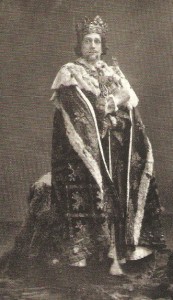 For the Spring Festival in April 1901 in Stratford-upon-Avon F R Benson put on a cycle of Shakespeare’s history plays that quickly became known as the Week of Kings. England’s turbulent history must have been a subject of great interest following the death of Queen Victoria on 22 January after a 63-year reign during which the country enjoyed decades of growth, reform and social improvements. Coming at the start of a new century it was also a time for looking forward.

The cycle consisted of six of Shakespeare’s plays, performed in historical sequence, at the time an ambitious programme that attracted a good deal of attention.

Among the interested visitors in April 1901 was the celebrated Irish poet and leading literary figure W B Yeats He came to see the Week of Kings, staying in the comfort of the Shakespeare Hotel. He wrote two essays for The Speaker describing his impressions of both Stratford and the performances, reprinted later as a single essay In Stratford-on-Avon. Click the link for the full essay. 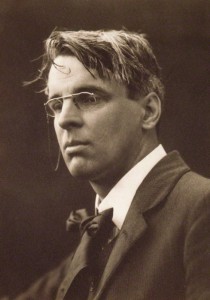 Yeats was seduced by the whole experience. He disliked almost nothing in Stratford, and just now, in high summer, while the town and its river are looking particularly lovely, it’s interesting to read an extract of the essay considering how much has changed, yet how some things still remain:
One passes through quiet streets, where gabled and red-tiled houses remember the Middle Age, to a theatre that has been made not to make money, but for the pleasure of making it, like the market houses that set the traveller chuckling; nor does one find it among hurrying cabs and ringing pavements, but in a green garden by a river side.

Inside I have to be content for a while with a chair, for I am unexpected, and there is not an empty seat but this; and yet there is no one who has come merely because one must go somewhere after dinner. All day, too, one does not hear or see an incongruous or noisy thing, but spends the hours reading the plays, and the wise and foolish things men have said of them, in the library of the theatre, with its oak-panelled walls and leaded windows of tinted glass; or one rows by reedy banks and by old farmhouses, and by old churches among great trees.

It is certainly one’s fault if one opens a newspaper, for Mr. Benson gives one a new play every night, and one need talk of nothing but the play in the inn-parlour, under the oak beams blackened by time and showing the mark of the adze that shaped them.

I have seen this week King John, Richard II, the second part of Henry IV, Henry V, the second part of Henry VI, and Richard III, played in their right order, with all the links that bind play to play unbroken; and partly because of a spirit in the place, and partly because of the way play supports play, the theatre has moved me as it has never done before.

That strange procession of kings and queens, of warring nobles, of insurgent crowds, of courtiers, and of people of the gutter has been to me almost too visible, too audible, too full of an unearthly energy. I have felt as I have sometimes felt on grey days on the Galway shore, when a faint mist has hung over the grey sea and the grey stones, as if the world might suddenly vanish and leave nothing behind, not even a little dust under one’s feet. The people my mind’s eye has seen have too much of the extravagance of dreams, like all the inventions of art before our crowded life had brought moderation and compromise, to seem more than a dream, and yet all else has grown dim before them. 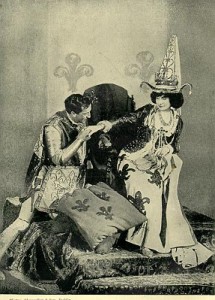 It is certainly still possible to feel that sense of immersion in Shakespeare that Yeats describes, conveyed powerfully by Frank Benson and his company. Looking at photographs of him in action, and even a short clip of silent move, it can be hard to take Benson’s acting seriously. He never had the star quality of Irving, and carried on playing leading roles much longer than he should have. But in 1901 he was performing well, and in a letter written at the same time as his essay, quoted in J C Trewin’s book Benson and the Bensonians, Yeats compared the Benson Company with their contemporaries:
They speak their verse not indeed perfectly, but less imperfectly, than any other players upon our stage, and the stage management is more imaginative than that of other companies…I thought Mr Benson’s Henry the Fifth nearly as good as his Richard the Second, and admired how he kept that somewhat crude King, as Mr Waller did not, from becoming vulgar in the love scene at the end when the language of passion has to become the instrument of policy.

So much did Yeats approve that later that year Benson’s company was to stage Yeats’ play Diarmuid and Grania, co-written with George Moore, at the Gaiety Theatre in Dublin. It was a story from Irish mythology, its dramatic scenes, some found, reminiscent of Wagnerian opera. A transfer to London had been intended, but after four performances the play was quietly dropped.

While it may have been appropriate for English actors to perform Shakespeare in Ireland, the time was past when they could present a tale so central to Irish culture. In 1904 Yeats co-founded the Abbey Theatre in Dublin. Many years later in his history of the Abbey Theatre Gerard Fay noted that the play “had a place in Irish theatre history – that it was the last time Dubliners had to call in English actors before they could see a production of an Irish play.”