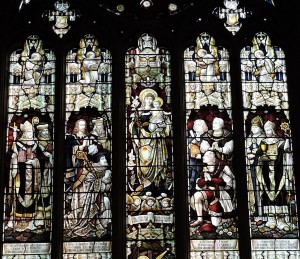 The affection that Stratford is held in by Americans has been demonstrated in a number of buildings and monuments: the American Fountain in Rother Street, opened in 1887, for example.

Less well-known is the American Window in the south transept of Holy Trinity Church. The first sections of this magnificent stained glass window were dedicated on 23 April 1896, and completed a few years later by the company Heaton, Butler and Baines. The subject is the Madonna and Child with the Adoration of the Magi at the centre, with figures on either side symbolising the links between England and America. The transept is often used for private worship or afternoon prayers, and the window is not easy to see in detail. Val Horsler, in her book Shakespeare’s Church: a parish for the world describes it: “English and American holy men [occupy] the outer lights, including Archbishop Laud, who was the first to suggest sending a bishop to America, plus Amerigo Vespucci, Christopher Columbus, William Penn and the Pilgrim fathers landing at Plymouth Rock. Also depicted are St Eric, Bishop of Greenland, and Dr Samuel Seabury, first Bishop of Connecticut. Underneath is inscribed “The Gentiles shall come to thy light, and the Kings to thy brightness. AMDG The Gift of America to Shakespeare’s Church”. 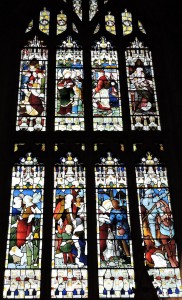 The Seven Ages of Man window in Holy Trinity

Even though a little inaccessible, the American Window is well-known, but I only recently realised that there is another, older window in Holy Trinity Church which was paid for by Americans. This one is the window on the left of Shakespeare’s monument on the north side of the chancel, the third one from the east end. It must be looked at and maybe photographed by thousands of American tourists every year without them realising its significance. All the windows on this side of the chancel depict old-testament scenes, while those on the other side illustrate stories from the new testament. It illustrates the Seven Ages of Man speech from As You Like It, personalities from the bible being used to represent each of the different ages. Designed by Lavers and Westlake, It was “Dedicated to Holy Trinity and Shakespeare by a great number of New World inhabitants in 1890” While the American Window was the gift of America, presumably in the form of a single gift, it took twelve years to raise the funds from individual visitors to the church in order to create this tribute to Shakespeare. 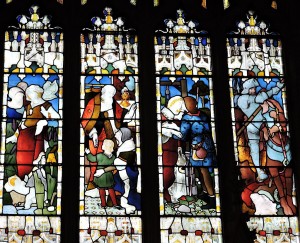 I wrote over three years ago about the stained glass windows in the Shakespeare Memorial Theatre that depict this speech, dating from the 1880s. I mentioned other windows from around the world that take the same popular subject, without realising there was another set so close. These windows have suffered from fading, so some of the details, especially the faces, have disappeared. As is so often the case with monuments in churches, they are also so high up that it’s hard to see exactly what is depicted, but the window for the infant depicts Moses in the bulrushes and the second window, the schoolboy, shows the child Samuel being taken by his mother to the temple 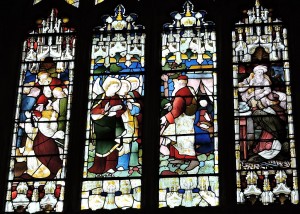 The last three ages of man

The scene for the Justice is the judgement of Solomon, and in the final window I assume the old man “sans everything” is Methuselah. I’m sure somebody has identified all the scenes and if anyone has them I’d be delighted to hear. These windows, and the story of their creation, deserve to be better known.