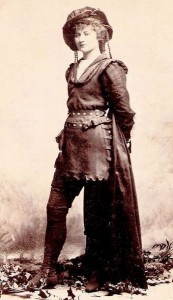 Although her name is now almost forgotten, Mary Anderson was a young actress who had caused a sensation both in her native USA and in England, and demand for tickets was high. The benefit performance raised £100 that paid for two of the three terracotta panels representing Comedy, History and Tragedy facing the theatre from Chapel Lane. The new Library and Picture Gallery wing of the Shakespeare Memorial Theatre was to be beautified with these panels. 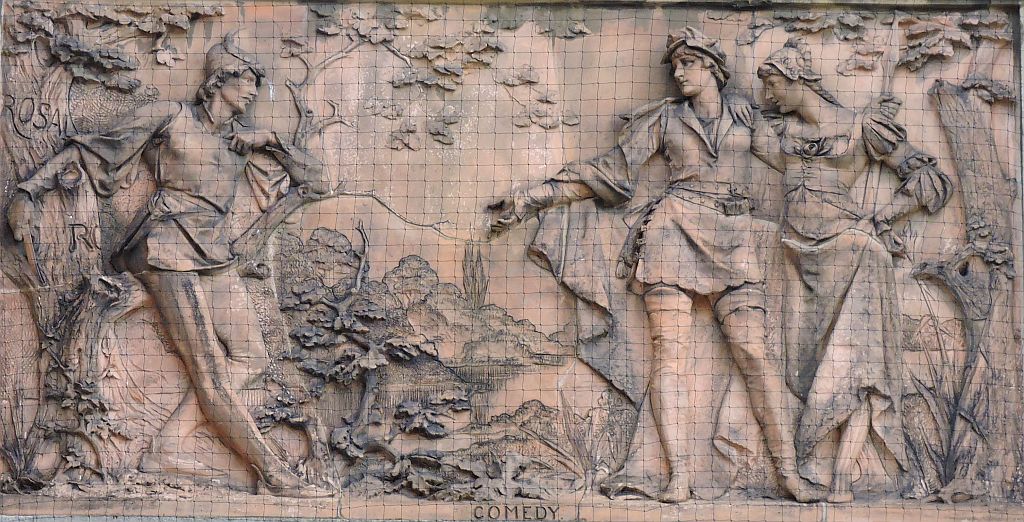 The two she paid for showed, appropriately, Mary Anderson herself playing Rosalind, and the graveyard scene in Hamlet, while the History scene, from King John, was paid for by the architect of the building, W F Unsworth. All three panels were made by German sculptor Paul Kummer. They are beautifully detailed, much finer than those on the Old Bank, for instance, but currently covered in netting to prevent the attentions of pigeons, are difficult to see. On the As You Like It panel is shown the tree on which the love-lorn Orlando has been carving Rosalind’s name. 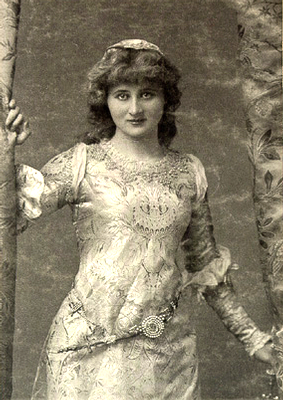 Mary Anderson was born in California in 1859 and took up a theatrical career at the tender age of 16 with a performance as Juliet in Louisville, Kentucky. In spite of having barely any training in acting she became an instant success, with a melodic voice and as the photographs show she was a great beauty. She went on tour in this role and in 1877 also took on Lady Macbeth.  Her success continued and she travelled to Europe in 1879, and again in 1883-5 when she undertook the role of Rosalind which she performed in Stratford-upon-Avon. Her Orlando was Johnston Forbes-Robertson, who was later, at London’s Lyceum Theatre, to become one of the finest of Hamlets, with a beautiful voice and exquisite elocution. 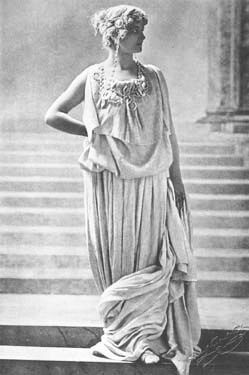 In 1887 she was back in the UK again, with The Winter’s Tale. In an innovation that has since been repeated a number of times she doubled the roles of Hermione and her lost daughter Perdita, while Forbes-Robertson played Leontes.  The production was successful artistically, but it was also seen as a vehicle for the celebrity actress. For their first performance, on April 23, Shakespeare’s Birthday, it was reported that “Three thousand persons…filled the Theatre Royal, Nottingham, from floor to ceiling”. The production had an amazing run of 164 performances, and was taken back to the USA. Here she took it on tour until in March 1889 she collapsed during a performance in Washington, DC suffering from nervous exhaustion.

After just fourteen glittering years, and at the age of 30, Mary Anderson announced her retirement from the stage.  The following year, 1890, she married Antonio Fernando de Navarro, an American sportsman, and they settled at Court Farm, in the beautiful Cotswold village of Broadway in Worcestershire, only a few miles from Stratford-upon-Avon. Although from then on she rarely appeared in public, she did take part in some special performances during World War 1. In Stratford she was persuaded to come out of retirement for two star-studded special performances on 5 and 6 May 1916 for the Tercentenary of Shakespeare’s death.

These special events were compilations of great scenes from Shakespeare’s plays, and Anderson played Lady Macbeth’s sleepwalking scene. On 5 May, the first and grander of the two shows, the Doctor was played by Ben Greet, who had also brought his company to Stratford in the early years and was by 1916 the director of the Old Vic in London. After her retirement she published two volumes of autobiography, A Few Memories (1896) and A Few More Memories (1936). In 1940, aged 80, she died in Broadway, fifty years after she had given up the stage.

The terracotta panel, showing her, dressed as Ganymede in a forest scene in As You Like It, is a lovely, if much-overlooked reminder of Mary Anderson’s glittering career.

This entry was posted in Shakespeare on Stage, Stratford-upon-Avon and tagged 1916, American, As You Like it, Johnston Forbes-Robertson, Macbeth, Mary Anderson, Romeo and Juliet, Shakespeare Memorial Theatre, terracotta, The Winter's Tale, USA. Bookmark the permalink.