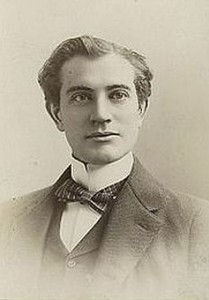 The Royal Shakespeare Theatre contains a little memorial that has always interested me. Just by the fountain at the base of the spiral staircase is a plaque dedicated to The American actor James K Hackett, 1869-1926, “a generous benefactor to this theatre”. At the bottom it lists two performances, Macbeth, in London in 1920 and Othello, in Stratford in 1922.

The James Hackett that I recognise from engravings was an actor playing Falstaff: the image of him in The Merry Wives of Windsor is very well known. But these are of a comic actor dating from the middle of the nineteenth century. 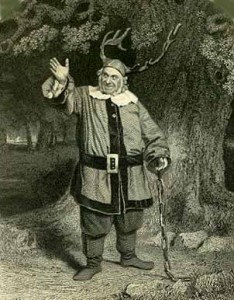 James Henry Hackett was a well-known actor, famed for his Falstaff which he performed in the US and then in the UK on many occasions between 1833 and 1851. He was the first important American actor to be a success in England. He is also remembered because he made extensive notes about Edmund Kean’s performance of Richard III in around1828 and h notebook is a unique piece of evidence for Kean’s acting. Other Shakespearean roles included Hamlet, which he studied for several years. He entered into correspondence about the part with John Quincy Adams and was so proud of this connection with an American president that in 1863 he published their letters. At the age of 69, in 1869, he fathered a child who was aged only two when his father died in his native New York.

This son, James Katelkas Hackett was born in Ontario but lived mostly in New York. Early in his stage career he performed in Daly’s productions of The Taming of the Shrew and Twelfth Night and later, at different times, played both Romeo and Mercutio. From 1896, he performed regularly on Broadway, assisted by his matinee idol looks. He starred in The Prisoner of Zenda, which subsequently became a silent film using the original cast. In 1914 he toured with a production of Othello and in the same year inherited well over a million dollars from his niece, giving him financial independence. For the tercentenary of Shakespeare’s death in 1916 he planned to stage three of Shakespeare’s plays with himself in the lead: Macbeth, Othello and The Merry Wives of Windsor. The Macbeth received lukewarm reviews and he appeared in neither of the other plays. During the War (1917-18) he directed dramatic and musical entertainments for troops for the Catholic Knights of Columbus. Then in 1920 he made his London debut with a new production of Macbeth at the Aldwych Theatre with Mrs Patrick Campbell playing Lady Macbeth, and the following year played the same role at the Odeon in Paris for which he was awarded the Legion d’Honneur.

In 1922 he was offered the chance to play Othello at the Shakespeare Memorial Theatre. W Bridges-Adams’ letter, and Hackett’s reply, appeared in the Stratford-upon-Avon Herald of 21 April. Bridges-Adams suggested “You will be performing a valuable work in cementing still closer the bonds which unite the English-speaking races”, and Hackett accepted: “It will indeed be a great honour to essay Othello… on that hallowed ground”. 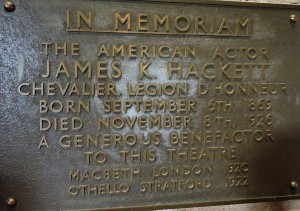 The plaque to James K Hackett at the RST

He pulled the American flag at the Birthday Celebrations, then gave just one performance, the matinee on Thursday 27 April. The play had already been performed in the Festival. Hackett’s wife played Desdemona and they were ably supported by Dorothy Green as Emilia and Baliol Holloway as Iago. The house was packed and “a great reception was accorded to the celebrated actor.” The Stratford Herald enthused “Mr Hackett is the possessor of a regal figure and noble presence. His voice is sonorous, mellow and of rich timbre, and is used with fine modulation – love, scorn and rage being all expressed without effort”. The Times agreed: “The great scenes are for him music to be played with every instrument at his command. His voice is rich and splendid: his every movement bold and full… [He gives] a full-blooded performance”.

The Birmingham Mail described how after half a dozen curtain calls for each of the principals, “Then the curtain rose once more to reveal the whole company grouped around the massive, picturesquely-garbed figure of Mr Hackett, who was supported also by Mr Archie Flower, chairman of the Memorial Governors, and Mr W Bridges-Adams, the director of the company. Mr Hackett carried two large wreaths of bay, while the arms of his wife (Miss Beatrice Beckley), were overladen quite with gorgeous bouquets… Followed a few moments of speech-making… during which the famous visitor remarked upon the consistent friendliness and appreciation extended to him in England”.

James K Hackett’s vocal prowess is remembered by The Department of Education of the City of New York which still awards the annual James K Hackett medal to a student who demonstrates “the greatest proficiency in oratory, either verse or prose”.

Hackett died in a Paris hotel in 1926 aged 57. It seems he used his inherited fortune  to make many bequests to the arts, including the University and the Shakespeare Memorial Theatre. 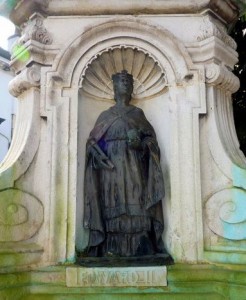 James K Hackett as Edward II on the Marlowe memorial

There’s another monument to James K Hackett in England: it’s the one to Christopher Marlowe in Canterbury, his birthplace, which was unveiled by Sir Henry Irving in 1891. The bronze figure represents the muse of Dramatic Poetry, and the niches were filled only in 1928 with four small bronzes of actors in roles in Marlowe’s plays: Irving as Tamburlaine, Johnston Forbes-Robertson as Faustus, James K Hackett as Edward II and Edward Alleyn as the Jew of Malta. Strangely, as far as I can tell none of the actors apart from Alleyn ever performed the role in which they are portrayed. If anyone knows what the connection between Hackett and Marlowe’s play was I’d love to hear from you.