Posted on September 3, 2014 by Sylvia Morris 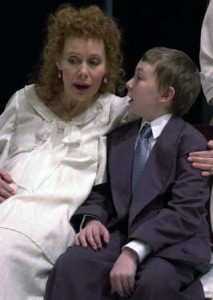 For Shakespeare’s towards the end of his life, early September must have been a sad time, not just because it signalled the end of summer. Both parents died at this time of year: his father was buried on 8 September 1601, and seven years later, on 9 September 1608, his mother Mary. We know little about Shakespeare’s parents. John came from the little village of Snitterfield where his father rented a farm owned by Mary’s father Robert. He was an ambitious young man, moving into Stratford-upon-Avon, learning to be a skilled glover, and getting himself onto the newly-established local  council. Mary’s family lived in the village of Wilmcote, part of the “ancient and worthy family”, the Ardens. Mary was the youngest of eight sisters, and must have been a capable young woman as she was named as one of the executors of her father’s will as well as being a major beneficiary. John was lucky to catch a woman with an inheritance. The date and place of their marriage is unknown but probably took place during 1557, the year following Mary’s father’s death. There’s no evidence that either was educated, but their country background doesn’t mean they were completely illiterate.

Scientific studies are now proving that the first few years of a child’s life are crucial to their development. In Shakespeare’s time women were responsible for the rearing of young children, and his mother’s influence would have been very important. As John and Mary’s first surviving child, following two sisters who died young, William must have been dearly cherished.

Shakespeare writes several scenes showing young boys and their mothers in a close and affectionate relationship.  In The Winter’s Tale Mamillius begins to tell his mother a story before the cosy scene is broken apart by Hermione’s arrest on suspicion of infidelity. 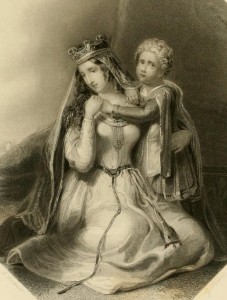 Engraving of Constance and Arthur in King John

Many of the children in Shakespeare’s plays are parted from their mothers by death or politics, the separation made more poignant by the distress of their mothers. In King John, Constance’s son Prince Arthur has been taken away from her:

Grief fills the room up of my absent child.
Lies in his bed, walks up and down with me,
Puts on his pretty looks, repeats his words,
Remembers me of all his gracious parts,
Stuffs out his vacant garments with his form;
Then have I reason to be fond of grief? …
O Lord! My boy, my Arthur, my fair son!
My life, my joy, my food, my all the world!

Richard III’s greatest crime is the killing of the little princes in the Tower of London. This event is the catalyst that unites three women, not natural allies, in cursing the man responsible for many deaths. A series of ritual incantations express their rawness of emotion, and can be one of the most powerful moments in the play.

Shakespeare knew what it felt like to lose a child, both from observing his own mother when as a 15-year old boy his 7-year old sister Ann, died, and from his own experience of losing his son Hamnet in 1596, aged only 11.