About 10 days ago I wrote about the ways in which actors approach speaking Shakespeare’s poetry to bring it alive in performance. That post was mostly looking at OP or original pronunciation as opposed to modern speech, and some time ago I wrote a post about Shakespeare’s use of rhyming couplets.

But it’s obvious from the large number of YouTube videos that the element of Shakespeare’s verse that needs most explanation is the metre in which it’s written. Getting to grips with it is important whether the lines are going to be spoken out loud or not. Iambic pentameter is the offputting name for lines written in the most natural of all rhythms, the heartbeat. It goes:

Shakespeare doesn’t make it simple, as no sooner has he established the regular iambic pentameter line than he creates lots of alternatives: feminine endings, short lines and other irregularities. In As You Like It Rosalind’s comment on Orlando’s verses written in her praise is that, “some of them had in them more feet than the verses would bear.” Christopher Marlowe with his “mighty line” popularised the use of blank verse in drama, but it was Shakespeare who realised how much more effective it could be if the regularity of the lines was sometimes broken.

In my other post I mentioned John Barton’s series Playing Shakespeare, a series of masterclasses showing actors how to make the verse work for them. The series doesn’t only work for actors: as we read Shakespeare’s works to ourselves we can hear the iambic pentameter just as much as if it’s being read out. In the second programme, and chapter 2 of the book of the series, Barton explains that “Blank verse is probably the centre of the Elizabethan tradition and perhaps the most important thing in Shakespeare that an actor has to come to terms with. Or rather I should say than an actor needs to get help from. I stress that because many actors, particularly if they’re not familiar with Shakespeare, very understandably look at the verse as some kind of threat….It becomes a mountain to be climbed or else an obstacle to be avoided. But no, it’s there to help the actor. It’s full of little hints from Shakespeare about how to act a given speech or scene. It’s stage direction in shorthand… Shakespeare was an actor, and I believe that his verse is above all a device to help the actor. ”

Those clues that Barton talks about can help readers just as much as by actors. Here’s Programme 2 where John Barton explains what he means.

The RSC does have a bit of a monopoly on the subject with a whole section on its website about Shakespeare’s language:

Also from the RSC’s website here’s an explanation of the subject in written form. 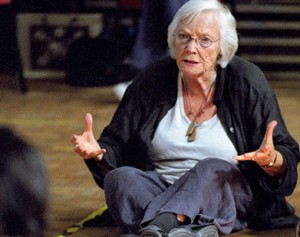 Here’s Cicely Berry, some RSC actors and one of the RSC’s team working with a group of children on the verse.

If you prefer something more imaginative you can find all sorts of weird and wonderful ways of explaining iambic pentameters on YouTube including rap, paper cutouts, diagrams on blackboards and kids fighting in the gym, but this straightforward example shows a teacher encouraging her pupils to create their own iambic pentameters.

The following extract is from one of Shakespeare’s most magical blank verse speeches. In Henry V the Chorus conjures up for the audience the atmosphere of the English camp on the night before the battle of Agincourt. The rhythm of the verse comes through even if you’re just reading it: 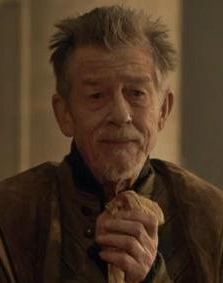 Now entertain conjecture of a time
When creeping murmur and the poring dark
Fills the wide vessel of the universe.
From camp to camp through the foul womb of night
The hum of either army stilly sounds,
That the fixed sentinels almost receive
The secret whispers of each other’s watch:
Fire answers fire, and through their paly flames
Each battle sees the other’s umber’d face;
Steed threatens steed, in high and boastful neighs
Piercing the night’s dull ear, and from the tents
The armourers, accomplishing the knights,
With busy hammers closing rivets up,
Give dreadful note of preparation.