Shakespeare’s own use of music, and the many ways in which Shakespeare’s works have inspired composers in the centuries since he wrote them, are among the most recurrent subjects for this blog. And in the next few weeks there are a few events coming up that I would like to mention.

On Thursday 16 October there begins a series of lectures and recitals on the subject Shakespeare and Music.This is the Kingston Shakespeare Seminar for Autumn 2014, promoted by Kingston University On six Thursdays, late in the afternoon, this series of events will take place at the Rose Theatre in Kingston-upon-Thames or at the University itself. Best of all, each event is free.

The first three are as follows:
Thursday October 16 at 5.30pm. Chantal Schutz (University of Paris 111) with Jamie Akers, lute. “The scholar’s melancholy is emulation; the musician’s, fantastical”: Shakespeare and Dowland.

Thursday October 30 at 5.30pm. Christopher Wilson (University of Hull) “By the sweet power of musicke”: Effect in Shakespeare’s musical imagery.

The final three take place on 20 November, 27 November and 11 December, and you’ll find full details on the Cardiff Shakespeare blog here. At the time of writing the full details don’t seem to have made it to the Kingston University website.

Also on Thursday 16 October the Stratford Music Festival begins, carrying on until 25 October with a full programme of recitals of many kinds of music, performed in a great variety of venues: I particularly like the sound of the lunchtime concerts in Stratford’s beautiful Town Hall. Click on the link for the full programme. 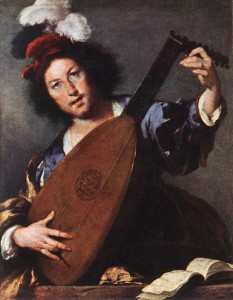 For those with an interest in Shakespeare, the unmissable event is the concert on Tuesday 21 October at 7.30pm at the Guild Chapel, under the name Marvellous Sweet Music. Quoting the publicity:

Opera stars Mary Bevan and Benedict Nelson will join musicians from the RSC to perform twenty-one of the most famous songs in Shakespeare’s plays from over a century of productions.

The plays of Shakespeare are filled with music & song: they include more than 2000 references to music, over 400 separate musical terms & around 100 songs.

In this concert by the Royal Shakespeare Company, twenty-one of the most famous songs in Shakespeare’s plays are performed in settings dating back over a century, which highlight not only the changing style and aesthetic of theatre music across the decades, but also reveal some of the fascinating biographical stories of the composers themselves.

Those composers form a select and diverse group, including some of the great names of classical and popular music of the 20th Century such as Ralph Vaughan Williams, Billy Bragg, Lennox Berkeley, Roberto Gerhard, Stephen Warbeck, Ian Dury, Nigel Hess, Laura Marling and Paul Englishby.

The concert is under the direction of Bruce O’Neil, RSC Director of Music, and it’ll be a great opportunity to hear some of the terrific music that has been written for the stage rarely to be heard again.

And finally, one for the diary: in December there will be a small exhibition on Shakespeare and Music at the Shakespeare Institute Library in Stratford-upon-Avon, which is sure to be worth a look. There’s more about the Library here including an email address for more information.