So how should Shakespeare really sound? 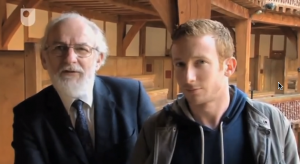 The biggest perceived challenge to anyone getting to grips with Shakespeare for the first time is probably making sense of the language. All the old-fashioned words, the use of “thee” and “thou”, the poetic constructions, the grammar itself. Yet reading a modern English version of the plays is a poor substitute for the real thing.

One of the experiments encouraged by the reconstruction of Shakespeare’s Globe has been into Original Pronunciation (OP). This matches the attempts to reconstruct the physical playing space, the use of music played on authentic instruments, costumes in authentic fabrics, made by hand, and the use of men to play women’s parts. A recent online article from the Telegraph includes some examples of how it’s thought Shakespeare might have originally sounded.

The Globe’s first OP production was Romeo and Juliet in 2004, followed in 2005 by Troilus and Cressida. David and his actor son Ben Crystal have been the driving force behind them and the recordings. Here is their 10-minute introduction to the subject, filmed at Shakespeare’s Globe.  Their Original Pronunciation website contains much information, and the British Library have also published a CD of extracts from Shakespeare in OP.

It might be thought that reverting to original pronunciation would add yet another layer of difficulty for those already struggling. But the strong interest in OP is at least partly owing to the fact that the accent is more approachable for people intimidated by the language and the expectation that it requires a posh English accent. It’s a subject that those dealing with speaking Shakespeare have been concerned about for years. Cicely Berry, for many years the RSC’s Head of Voice, fought against the perceptions that “there is some sort of mystique” about poetry. “You are either over-reverent about it, and the ‘poetry voice’ happens, or rebelling against the ‘poetry voice’ you ignore the form and go only for the logical sense, and the poetry then sounds like prose”.

The pronunciations suggested by the Crystals sound less formal than Received Pronunciation (RP), and may be easier to adopt. I’m happy to admit I don’t know a lot about this subject, and I know that the recordings are the result of years of research. But I still feel a little unsure about taking them too literally. OP has been described as a mixture of West Country, North Country, Irish and American. But even today there are huge differences between, for instance, the North Country accents of Liverpool and Newcastle. Surely regional accents were at least as varied in Early Modern England as they are now, so there would not have been a single OP accent. It has been suggested (though not in the recordings) that Shakespeare himself would have spoken with a regional accent of some kind (a precursor of Brummie perhaps).

The Crystals make much of spelling, which tended to be more phonetic than it is now, and of the use of rhyme. The couplet at the end of a sonnet usually rhymes, and if it doesn’t appear to, they suggest that the pronunciation must have changed. So “love” and “prove” as in Sonnets 116 and 117, must have been pronounced the same. Caution is needed here, though. The same logic would mean that “where” and “near” (Sonnet 61) would be pronounced the same, as would “gone” and “alone” (Sonnet 66), “wrong” and “young” (Sonnet 19) and “noon” and “son” (Sonnet 7). Isn’t it possible that something else is going on here, a deliberate “jolt”, to use John Barton’s word describing the effect of changing the stresses within a line in one of the same sonnets.

In this shorter extract Barton talks about Original Pronunciation and gives a demonstration of it.

He later fronted a 9-part series, Playing Shakespeare, also available in full on YouTube. In the first of the series, Sheila Hancock suggests that when looking at how to speak Shakespeare’s language “it makes sense to start with our own tradition, because that’s what’s inside us and it’s what we know best”.

For me what makes a performance compelling isn’t the accent in which it’s spoken but the quality of the acting and speaking. If you’ve never watched any of this I implore you to do so, ignoring the fact that actors like Ian McKellen, Sheila Hancock and Ben Kingsley look so very young. Look for instance at programme 9 in which there’s a recording of Peggy Ashcroft playing Viola from the 1940s, still sounding fresh, and if you never heard Donald Sinden being serious, listen to his speech from Othello in programme 5. It’s still an astonishing series, over thirty years on.