Printing and publishing in Shakespeare’s world 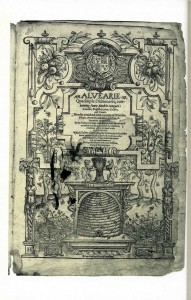 A couple of weeks go I heard an interview with an author who had tracked down the people who had pre-owned some of his books. It sparked a discussion about writing in books, from a simple signature of ownership, to an inscription in a gift, or notes written in the margins. This can be seen as vandalism, but marginalia can also be worthy of study, particularly if the person doing the writing is interesting enough.

I was recently sent a link to the website Shakespeare’s Beehive.   Back in 2008 two antiquarian booksellers, George Koppelman and Daniel Wechsler bought a copy of John Baret’s Alvearie, a dictionary dating from 1580 that explains each English word before giving the equivalent in Latin and French. It contains many manuscript notes which, as they examined them, gradually convinced them that they were written by Shakespeare. On the website is a complete digitised copy of the original book so it can be examined in detail. There is no charge, but it is necessary to register and sign up for their terms and conditions.

I’m certainly no expert in palaeography so am happy to find that Michael Witmore and Heather Wolfe from the Folger Shakespeare Library have investigated the annotations, reporting their findings on The Collation, in the post Buzz or honey? Shakespeare’s Beehive raises questions.  Any suggestion that a book was owned by Shakespeare has to be treated with extreme caution so they are sceptical. The search for Shakespeare’s books, particularly in the eighteenth century, resulted in many forgeries and the Folger Shakespeare Library must contain quite a few dubious items. I’m not sure if the argument is more or less convincing because this one does not contain anything to link it with Shakespeare apart from the content of the marginalia.

An illustration of Gutenberg’s press

The history of printing in the years before Shakespeare was born has been considered by Neil MacGregor in his recently-completed Radio 4 series on Germany. Johannes Gutenberg created the first printing press using moveable type in the German city of Mainz around 1450. MacGregor described how Mainz was in the perfect location: in a wine-growing region so he was able to make use of the technology used in pressing grapes, and in an area specialising in metallurgy so the knowledge required to make individual pieces of metal type was available. Frankfurt, where paper could be bought and from where books were distributed, was easily accessible. Gutenberg was in just the right place at the right time.  His invention was also swiftly copied, and printing was introduced to Cologne where William Caxton observed it, setting up the first printing press in London in 1476. 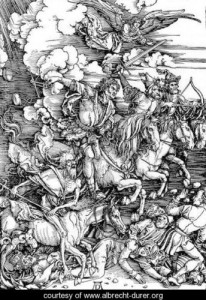 Durer’s engraving of The Four Horsemen of the Apocalypse

In his next talk MacGregor looked at Albrecht Durer, an artist who, born the son of a goldsmith in Nuremberg in 1471, was also in the right place at the right time. Durer acquired fine metalworking skills, had the imagination of an artist, and the vision to see that creating prints, again to be distributed using the rivers of Germany, would ensure his work reached a wide market. MacGregor likened Durer to Shakespeare in that both men explored all areas of life in their work. Both were also commercially successful, and Durer’s work came to define qualities of German nationality just as Shakespeare does for the English. The recordings are available as podcasts and there are photographs of some of the items described on the website.

I’ve recently come across several references to the role of women in the world of early modern printing. Again at the Folger Shakespeare Library, Sarah Werner wrote a post a few years ago on the subject of women printers.  She refers to Helen Smith, whose book Grossly Material Things: Women and Book Production in Early Modern England was published in 2012.

In her review of the book Alice Eardley explained the significance of Smith’s research, ” revealing women’s participation as printers, stationers, business partners, employers of apprentices, participants in the mechanical processes of book production (including binding), overseers, and as patrons of the Stationers’ Company”. 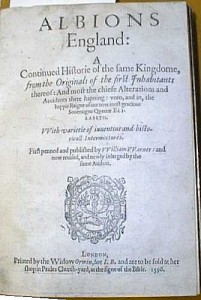 She finds that “even where they have not left material traces, women were not absent from the spaces in which book production and distribution took place, not least because commercial premises often coincided with domestic arenas.” She concludes that ” Smith’s insights are important…because they provide further evidence to contradict lazy modern assumptions about women’s complete exclusion, purely because of their gender, from commercial and civic life during the sixteenth and seventeenth centuries.”

Shakespeare himself had a connection with a woman printer. Fellow-Stratfordian Richard Field was apprenticed to printer Thomas Vautrollier for eight years before Vautrollier died in 1587. His widow Jacqueline was a printer in her own right and she continued to work with Field. The couple married two yeas later, Field succeeding to Vautrollier’s business and a few years later published both of Shakespeare’s long poems, Venus and Adonis and The Rape of Lucrece. Examples can be seen on the website of the University of Illinois which includes illustrations from their exhibition of womens’ publishing.