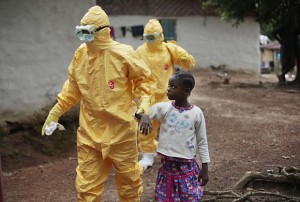 The outbreak of Ebola in West Africa has been one of the most alarming continuing stories of 2014. Seven thousand people have died and the West has been accused of being slow to respond. It is heartening to hear that medical staff from the UK will be working in Africa over Christmas.

Ebola has been called the modern plague. A terrible disease itself, it also wipes out families and communities, the affected sometimes being shunned by their neighbours. We are hearing stories reminiscent of the last great outbreak of bubonic plague to hit Britain, the Great Plague of London in 1665, where houses containing a victim were boarded up, condemning the rest of the inhabitants to almost-certain death. There was little medical treatment. 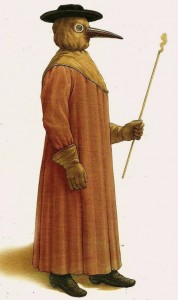 Nowadays those responsible for caring for victims of Ebola wear a distinctive enveloping costume that completely hides the person’s identity. It’s similar to the costume worn by the plague doctors of the seventeenth century, an all-covering cloak of waxed leather, with boots, gloves and a distinctive head-dress with a beak-like covering for nose and mouth. This was designed to be filled with herbs and even straw to help prevent infection. Modern uniforms are routinely cleaned and sterilised, but these costumes may themselves have spread infection. No wonder that Plague Doctor costumes, rather than being reassuring, have become frightening symbols of death.

For Shakespeare and his contemporaries plague was a continuing threat. The Black Death took place during the 1340s and 1350s, centuries before Shakespeare lived, but with about a third of the population of Europe and Asia dying the effects were long-lasting.

Between The Black Death and the 1665 Great Plague of London there were recurrent outbreaks. One occurred in Stratford during the year Shakespeare was born, 1564. The words Hic incepit pestis (here begins the plague) were written in the church’s burial register on 11 July.  William, just three months old, was lucky to survive: people often escaped to places of safety and it’s thought his mother may have taken him to her home village of Wilmcote. During 1564 around 250 people died in the town compared with fewer than 60 the year before.

Later he had other brushes with plague. In 1592, when Shakespeare’s career as a writer was just taking off, one in twelve Londoners died. Bills of Mortality were published giving details of who had died, parish by parish. The closing of the theatres because of plague could have damaged his career, but instead Shakespeare took the opportunity to find a patron and write his two long poems Venus and Adonis and The Rape of Lucrece.

An even more serious outbreak occurred in the summer of 1603, the year James 1 came from Scotland to succeed to the throne, and Shakespeare and his company became the King’s Men. It was so serious that the King’s grand procession into London had to be postponed. One in five citizens of London, about 25,000 people died. In the radio programme Shakespeare’s Restless World, Neil MacGregor talks about documents of the time, plague orders that gave people advice on how to cope: counting the infected, burying the dead, covering the costs. The Folger Shakespeare Library’s website contains illustrations of some of these documents. 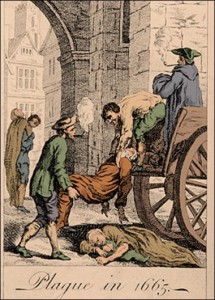 Collecting bodies during the Great Plague of London, 1665

Playwright Thomas Dekker’s pamphlet, The Wonderful Year, likened the outbreak to a battle against the adversary, Death:
Imagine then that all this while, Death (like a Spanish Leagar, or rather like stalking Tamberlaine) hath pitched his tents, (being nothing but a heape of winding sheets tacked together) in the sinfully-polluted Suburbes: the Plague is Muster-maister and Marshall of the field: Burning Feauers, Boyles, Blaines, and Carbuncles, the Leaders, Lieutenants, Serieants, and Corporalls: the maine Army consisting (like Dunkirke) of a mingle-mangle, viz. dumpish Mourners, merry Sextons, hungry Coffin-sellers, scrubbing Bearers, and nastie Graue-makers.

Plague must have been powerfully in Shakespeare’s mind too, but it’s rarely mentioned in his plays – perhaps because one of theatre’s functions was to offer escapism. It is plague that means Friar Lawrence’s letter to Romeo doesn’t get through, leading to his suicide in Juliet’s tomb. And in King Lear, the King likens his daughter Goneril to the plague, which can not be got rid of:
But yet thou art my flesh, my blood, my daughter;
Or rather a disease that’s in my flesh,
Which I must needs call mine: thou art a boil,
A plague-sore, an embossed carbuncle,
In my corrupted blood.

The Great Plague of 1665 killed between 70,000 and 100,000 people, something like 15% of London’s population. Without a major outbreak anywhere in the world for the last 60 years, bubonic plague is no longer thought to be a major risk. A recent Radio 3 programme, A Cultural History of the Plague draws links between pandemics including the current Ebola crisis, and is available as a download.

To find out more, the Medecins Sans Frontieres page contains information about Ebola, the outbreak, and action being taken to bring this modern plague under control.