Cheek by Jowl and Shakespeare’s Globe in the news 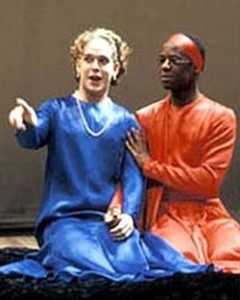 Tom Hollander as Celia and Adrian Lester as Rosalind, As YOu Like It, Cheek by Jowl, 1991

Two theatre companies which have made their mark by performing Shakespeare have recently made announcements about future programming and projects. First, Cheek by Jowl. Since they were formed in 1981 by Declan Donnellan and Nick Ormerod the company has done over thirty productions. Shakespeare has always been key: they’ve put on 15 Shakespeare productions and are an Associate Company at the Barbican, once the RSC’s London home.

Touring has always been at the heart of the company’s work, but they have taken it a stage further by working in French and Russian as well as English and touring to over 300 cities in 40 countries. The Guardian defined their style: they “bring life to the classics using intense, vivid performances like a laser of light to set the text ablaze”.

Now they are bringing their Russian-language production (with English surtitles) of Measure for Measure to London and the Oxford Playhouse in April 2015. It’s already been nominated for a number of awards. Booking is now open, and here is the trailer for what looks like an amazing production.

I’m also delighted to see the announcement that Cheek by Jowl are now making parts of their archives available on their website. This is due to a gift from Sophie Hamilton, a founder-Director of the Company in 1981 who died leaving a generous legacy to the Company. It has given them the opportunity to digitise and make accessible much valuable material that will enable more people to find out about the rich history of this Company and the stage history of the plays. For example, the play scripts for some productions have been digitised in full, as well as programmes and there are transcripts of the reviews and full cast lists. All this material is extremely useful particularly for the early productions that took place before the rise of the internet.

Work is continuing and more of the archive will be online by the end of the year. Apparently some of the photographs on the As You Like It page have never been seen before. This production is probably the Company’s most famous, with all all-male cast including the very young Adrian Lester as Rosalind and Tom Hollander as Celia. Originally dating from 1991 it was revived a few years later when it was filmed by the National Video Archive of Stage Performance, kept by the V&A Theatre Collections, where it can still be seen.

The company’s archives from the years 1981-99 are also kept at the V&A Theatre Collections. There’s information here from the V&A and here from the Archives Hub. Records of theatre productions don’t turn into archives unless an effort is made to keep them and it is good news that Cheek by Jowl are making plans to ensure that all new work is digitised and made available worldwide. In the Eyewitness section of the site they are also asking for online feedback about past productions to help enhance the records. 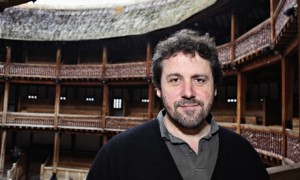 Meanwhile, at Shakespeare’s Globe the 2015 summer season, Dominic Dromgoole’s last, has been announced. Ambitious as ever, the theme of the season will be Justice and Mercy.”The season will probe the strengths and weaknesses of judicial law and the various tugs-of-war between family, state, religion, love, sex and duty that have defined human morality for centuries.” Nine Shakespeare plays are on offer including The Merchant of Venice, Measure for Measure and Richard II.

By the end of 2015 the theatre will have staged every one of the 38 plays written entirely or substantially by Shakespeare on the kind of stage for which the dramatist wrote. The final play will be a touring production of  King John, marking the 800th anniversary of Magna Carta. Interviewed by the Guardian, Dromgoole explained ” “This is a very significant moment for us….Doing the play that naturally attaches itself to Magna Carta, King John, is finishing a very big jigsaw puzzle that has been growing for 20 years.” The production will be a collaboration between the Globe and the Royal & Derngate Theatre, Northampton, and it will visit two wonderfully historic and atmospheric venues, the Holy Sepulchre Church in Northampton (visited by King John), and the Temple Church in London.

Like Cheek by Jowl, Shakespeare’s Globe has both toured extensively overseas and welcomed foreign productions of Shakespeare to the UK. Richard III is to be performed in Mandarin by the National Theatre of China, and Macbeth, by Tang Shu-Wing Theatre Studio in Hong Kong will be in Cantonese. It will be interesting to see where Shakespeare’s Globe goes next after a number of exciting and fulfilling years.

Finally, I’m indebted to Pat Tatspaugh and Tony Boyd-Williams for drawing my attention to the announcements in this post.

This entry was posted in Legacy, Shakespeare on Stage and tagged archives, As You Like it, Cheek by Jowl, Dominic Dromgoole, King John, Magna Carta, Measure for Measure, National Video Archive of Stage Performance, Russia, Shakespeare's Globe, Victoria and Albert Museum. Bookmark the permalink.