Happy Christmas from the Shakespeare blog 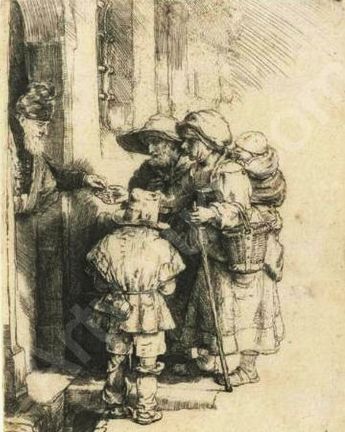 Giving alms to the needy

Many thanks to all of you who have been reading the Shakespeare blog during 2014! Over the past year I’ve written 145 posts, and have had nearly 135,000 visits to the site. I’ve also had many responses to posts and suggestions for new subjects: to everybody who has taken the time to get in touch, thank you!

Christmas is a time to look forward as well as back, but for Thomas Tusser, writing his 500 Points of Good Husbandry in the 1550s, just before Shakespeare was born, Christmas was about sharing one’s good fortune with those less fortunate in the midst of all the feasting:
At Christmas the hardnes of Winter doth rage,
a griper of all things and specially age:
Then lightly poore people, the yoong with the old,
be sorest oppressed with hunger and cold.

At Christmas by labour is little to get,
that wanting, the poorest in danger are set.
What season then better, of all the whole yeere,
they needie poore neighbour to comfort and cheere?

My Shakespeare highlight of the year has been the National Theatre’s production of King Lear that starred Simon Russell Beale, directed by Sam Mendes. The apocalyptic vision of the world in chaos which Shakespeare describes in the scenes on the heath were the most effective I’ve ever seen.

But after those scenes, the blinded and humbled Duke of Gloucester and his son Edgar, who has disguised himself as a beggar, display the charity and humanity that the King’s daughters and those in power have lost. Edgar, in spite of having nothing, is able to offer Gloucester a blessing: “Bless thy sweet eyes, they bleed”, and in giving the beggar his money Gloucester acknowledges everybody’s right to have what they need regardless of social position, misfortune, or ability.
Here, take this purse, thou whom the heavens’ plagues
Have humbled to all strokes. That I am wretched
Makes thee the happier. Heavens deal so still!
Let the superfluous and lust-dieted man
That slaves your ordinance, that will not see
Because he does not feel, feel your power quickly:
So distribution should undo excess
And each man have enough.

In spite of our prosperity there are still people in the UK who will be hungry or homeless over the festive season. I hope your Christmas will be peaceful and happy, and will bring you enough, without excess.

2 Responses to Happy Christmas from the Shakespeare blog