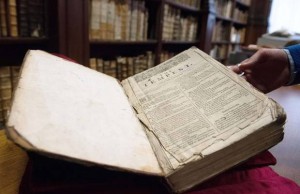 There was good news for those interested in the history of Shakespeare’s plays last week. On Tuesday 25 November, it was announced that a First Folio had been discovered in a public library in Northern France. Many libraries must be checking neglected corners just in case treasure is there: a folio, even an incomplete one, is worth a lot of cash. You couldn’t really call First Folios rare though:  this one brings the tally still in existence to 233, from a print run of between 750 and 800.

Professor Eric Rasmussen, by chance researching in the British Library at the time, was called in to validate the French copy. His 2012 book The Shakespeare First Folio: A Descriptive Catalogue describes all the then known 232 surviving copies. He calls it an “immeasurably important book” and comments that his new catalogue lists ” a remarkable 72 more than were recorded in Sidney Lee’s census over a century ago. A research team … examined every copy in situ worldwide and prepared full bibliographic descriptions of each.” Each copy is subtly different from all other copies, and this listing includes the variants found in each one.

First Folios are the most famous of printed books, second only to Gutenberg bibles of which 50 still exist out of a print run of around 180. What makes the discovery of this Folio so exciting is the thought hat there are still things to discover: letters, poems, a manuscript of an unknown play, a portrait, a book owned by Shakespeare. Who knows? The problem is that until proven otherwise all such items are assumed to be forgeries. William Henry Ireland’s forgeries in the late eighteenth century are only the most notorious: he did it to impress his father, but knowing how much a Shakespeare connection might inflate the price of any item it’s no wonder people are still claiming Shakespeare connections with books and other objects. The most convincing are those that don’t claim to be Shakespeare’s like that which is discussed in Shakespeare’s Beehive.

The folio is different: published seven years after Shakespeare’s death the one thing we can be sure of is that Shakespeare never saw it!

Part of the Library at St Omer

More details will come out in due course, but it seems that the book was found by chance by the Librarian in St Omer near Calais. Saint-Omer’s is no ordinary library. The small town has a population of 15,000, the settlement growing up around  the monastery founded in the 7th century. The whole area has been fought over for centuries between France, the Flemish, England and Spain, with sieges and fighting in the streets. It’s been part of France only since 1711. Just one section of ramparts remain from the medieval fortifications, but the parts of the cathedral, parts date back to the 13th century. The Abbey of St Bertin is long gone, its books finding their way to the town’s library which contains among its rare books a copy of the Gutenberg bible and the recently discovered Folio. Back in August a blog post suggested “This library though has a stunning secret “. The secret they were talking about wasn’t the Folio, but the Library’s collections as a whole. Now it’s even more stunning.

Given the turbulent history of this part of northern France it is astonishing that the Library still exists at all. As conflict raged all round presumably the doors of the Library were kept firmly closed and little interest was taken in it by those at war. The book has remained unknown because it was wrongly catalogued. Finding it with no title page or the famous frontispiece, a librarian at some time in the past thought it dated from the eighteenth century when numerous editions of Shakespeare’s works were published. They must now be wondering what else might be wrongly catalogued among the 50,000 volumes in this library, and academics are likely to be queueing up to find out. 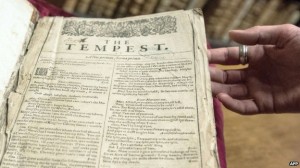 It’s the neglect of this library by investigators that seems to have ensured the book’s existence. Sadly in Stratford there’s little chance of finding anything with a personal connection to Shakespeare. Any object that might have been left in his house or his father’s would have fallen prey to those who from around the 1750s showed his house to the public, allowing visitors to cut pieces off the furniture for a fee.

This discovery doubles the tally of First Folios in France, the only previously-known copy being in the Bibliotheque National. There must be much rejoicing among the many French Shakespeare scholars and fans. The book does have interesting features: some markings in the text of Henry IV, and thirty pages missing. Questions about the book’s ownership and usage are already being asked. Current thinking is that it arrived there in the 1650s with an English Catholic escaping the repressive Cromwellian commonwealth. Claims are already being made suggesting that its discovery supports the idea that Shakespeare was a Catholic, a tricky one to prove. It’s going to be interesting to see where this new discovery might lead.

4 December additional information in this article includes information from Dr Martin Wiggins of the Shakespeare Institute who challenges the suggestion that the discovery strengthens the theory that Shakespeare was a Catholic:“He was admired and studied by English Catholics. We already knew that. Now we have more evidence. That doesn’t mean that Shakespeare was himself a Catholic sympathiser,”  And Dr Wiggins deduced some years ago that there had been a First Folio in St Omer: “The discovery of the Saint-Omer First Folio was a personal vindication for Dr Wiggins. In 2005, he wrote an essay, after studying the text of a play performed at the Saint-Omer college in the 17th century. He said that it contained so many verbatim passages from Shakespeare that the college must have owned one of the 800 copies of the First Folio.”