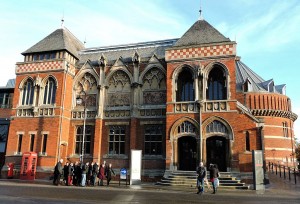 The Swan Wing of the RST in Stratford

Last week the Royal Shakespeare Company announced the start of a major project to restore what is now called the Swan Wing, the most historic part of their complex of buildings. From January work will begin on both the exterior and interior, and when the building reopens in April 2016 a new exhibition will document the RSC’s history and work.

A full press release is available here, and here is an interview with Geraldine Collinge, RSC Director of Events and Exhibitions  broadcast on BBC Coventry and Warwickshire on 2 December. Scroll to 2 hrs 5 mins into the programme.

I’m delighted to see so much attention being given to this part of the building. As Marian Pringle points out in her definitive book on the buildings, The Theatres of Stratford-upon-Avon 1875-1992, what is now called the Swan Wing was originally the Library and Picture Gallery. When the competition brief was written these features were included, and had to be incorporated into the design. The building was not just for theatrical performance, but would also allow its patrons to see fine paintings and engravings, to read books about Shakespeare, his plays, biographies, and stage histories. In The Shakespeare Memorial Theatre Ruth Ellis explained: “the idea in Mr Flower’s mind was of an eventual development into a school for dramatic and scholastic study of Shakespeare”.

Donations were requested, and the Library and Art Gallery were soon receiving large numbers of items. For many years these were seen as of enough interest to be listed in the Stratford-on-Avon Herald. 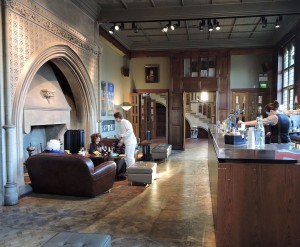 Now a bar, this room was originally the Library at the Shakespeare Memorial Theatre

On a Saturday afternoon in March 1926 a fire was discovered in the theatre.  According to Brown and Fearon in  Amazing Monument, “Volunteers were called for and quickly responded. A human chain was made across the road from the interior of the Museum to the Memorial Lecture Room. Books, pictures, and relics were transferred from hand to hand and finally deposited in safety well away from the flames….The first Four Folios, the Droeshout portrait, numerous large oil paintings, hundreds of valuable books, relics of famous Shakespearean actors…and a hundred and one other exhibits” were all saved. Then the wind changed and “the flames no longer threatened the treasure-house”.

These collections include books, paintings, sculptures and ephemeral material such as engravings and playbills as well as major collections such as the Bram Stoker Collection of material relating to Henry Irving and items relating to the Benson Company. The records of the theatre itself were added, growing exponentially as the brief annual celebrations evolved, becoming in the RSC an international organisation performing for most of the year in five different auditoria in Stratford and London. 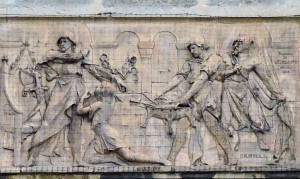 Paul Kummer’s bas-relief showing a scene from King John. It was given by the architect of the building, Unsworth.

The work on the Swan wing “will include the sympathetic cleaning of the brickwork, lead windows, and roof lights, together with the restoration and interpretation of the three exterior bas reliefs by Paul Kummer, which depict stories from Shakespeare of comedy, history and tragedy, and the original stained glass windows which line the Swan Theatre staircase and illustrate the famous lines of the Seven Ages of Man from Shakespeare’s As You Like It.”. The fabric of the building, and some of the features which in themselves represent the history of the productions performed in the theatre, are to be preserved.

But going back to the original function of this building, what about the items which it was designed to house and make available for use? The theatre’s library, archives collections, paintings and museum objects are of as much importance as the bricks and mortar, and just as much in need of care and conservation. There is to be “a new exhibition documenting the RSC’s history and showcasing how the Company makes its productions”. And while I’m delighted to hear  that “previously unseen treasures from the RSC’s internationally renowned Archive and Collection will feature in the exhibition, including costumes, set designs, props, photographs, paintings, drawings, audio and video recordings, and much more”, there seem to be no plans to assist with the long-term care of the hundreds of thousands of items in the RSC’s collections. 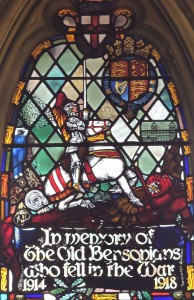 The Heritage Lottery Fund awarded a £2.8 million grant to the Swan Wing project, and the RSC’s fundraisers have worked hard to raise £2 million from a number of charitable foundations to safeguard the future of this historic building. Is it too much to hope that the next stage of this process will be to raise a similar amount of money to help conserve, care for, document and make accessible the whole of the RSC’s Library and Archive?

The following are posts I’ve written previously on  features of the Swan Wing:

The SMT and the fire

The glass panel of Shakespeare’s coat of arms

The Bas-reliefs on the exterior of the building