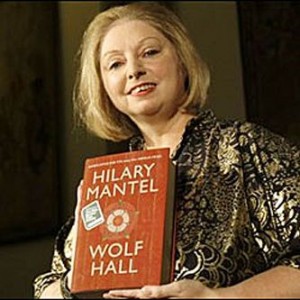 On 21 January 2015 the BBC’s 6-part adaptation of Hilary Mantel’s Man Booker Prize-winning novels about Thomas Cromwell, Wolf Hall and Bring up the Bodies, begins. Jane Garvey, in Woman’s Hour, said it had “set Tudor-fans hearts a-fluttering”, and publishers and broadcasters have been falling over themselves to produce material on the subject.

At the beginning of 2014 the Royal Shakespeare Company stole a march on the TV series, demonstrating theatre’s greater nimbleness over the juggernaut of a full-scale TV costume drama series. Mike Poulton’s adaptations are being staged in New York in March 2015. 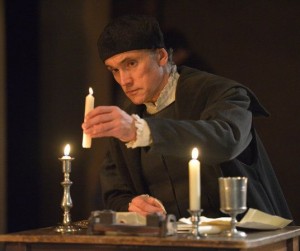 Theatre tends to concentrate on people and their relationships and the RSC’s stripped-down production matched the dark interiors and uneasy atmosphere of Mantel’s books. Filmed on location the TV series looks as if it will be physically sumptuous.

Saturday’s documentary presented by Lucy Worsley and David Starkey had an obvious Wolf Hall theme. Britain’s Tudor Treasure: a Night at Hampton Court, celebrated the 500th anniversary of the royal palace with a re-creation of the procession for the baptism of Henry VIII’s only legitimate son, Edward VI. Wolf Hall is set a little earlier, when Henry, obsessed by the need for an heir, divorced his first wife to marry Anne Boleyn, in the process getting rid of Cardinal Wolsey and the Catholic church. Many of the events are covered in the play Henry VIII, but Shakespeare had to portray Anne, Queen Elizabeth 1’s mother, as blameless, whereas Mantel’s Anne is much more complex. 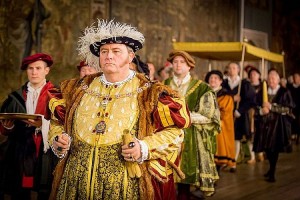 Re-creating a spectacular event in the place where it happened cast an interesting light on the two presenters, both historians who seemingly for the first time, saw the palace in a new light. “It’s a bit like being at the opera” said Lucy Worsley, “It shows how much is missing from Hampton Court just as a building. It needs its inhabitants”. David Starkey was similarly impressed: “Normally as historians we don’t actually think of how things worked, and this is all about how they work”. “I’ve had to think about how various things connected with each other in a way which I’ve never done before… All of these questions that are theoretical now actually become vigorously practical”. The christening took place in the Chapel Royal which was transfigured into a kind of theatre stage to ensure complete visibility. I was amazed that this seemed such a novel experience for them, with costumed interpreters now so common. They could learn a lot from theatre directors and movement coaches, skilled at staging processions such as that at the end of Henry IV part 2, about how to introduce activity into a series of gorgeous but static rooms.

Moving on, Radio 4’s Woman’s Hour examined an element that is often overlooked: the music. Debbie Wiseman talked about the challenge of writing music for the series. She quoted Hilary Mantel “Our past is their present”, and explained that it was important that the music should at times sound modern, mirroring both Hilary Mantel’s novels and the style of the series as directed by Peter Kominsky. “They are living their lives… we could be them”.

The most serious of the programmes was Start the Week on Radio 4, in which Tom Sutcliffe discussed the Tudors, asking the question “is a gripping story line a betrayal of historical realities… or the only way we can understand history?”. His interviewees were author Lady Antonia Fraser, composer Claire van Kampen (from Shakespeare’s Globe), Peter Kosminsky (the director of the new TV series) and historian Dan Jones whose new book is The Hollow Crown: The Wars of the Roses and the Rise of the Tudors. 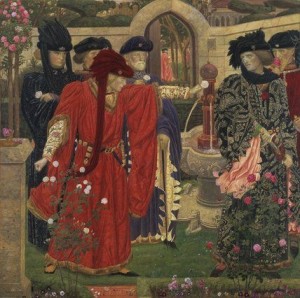 Study by Henry Arthur Payne for his painting Plucking the Red and White roses in the old Temple Garden.

Inevitably, Shakespeare came up. He is often cited as giving Richard III a bad name, and here he was held responsible for simplifying the Wars of the Roses into a battle between two warring factions (actually Shakespeare does convey more complexity than they gave him credit for). The brilliant early scene in the Temple Gardens where arguing nobles each choose roses, the Yorkists a white rose, the Lancastrians a red one, is pure fiction. Apparently the House of Lancaster did not use a red rose as its emblem until it was adopted as a piece of Tudor myth-making, but we “can’t get past the lens of Shakespeare”.

Shakespeare reinterpreted the past for the benefit of his present just as much as Hilary Mantel does for us. Antonia Fraser made the point that the play and film of A Man for all Seasons led to great admiration of Sir Thomas More (a view now contradicted by Mantel), and biographies of Oliver Cromwell written in the 1930s show the influence of Hitler and Mussolini. Hilary Mantel is already influencing historians writing today. Shakespeare’s genius was to telescope real events into a shape that worked brilliantly on a stage and could be performed in a few hours. The TV series, split into six hour-long episodes, will have a very different structure from the stage play written by Mike Poulton, and from Hilary Mantel’s original novels.