Standing up for freedom: the Library of Birmingham and Charlie Hebdo 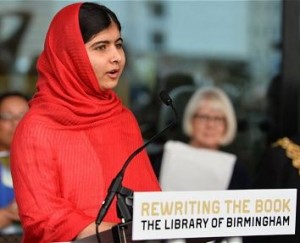 In September 2013 Malala Yousafzai opened the brand new Library of Birmingham with a speech which has since been quoted many times. “And let us not forget that even one book, one pen, one child and one teacher can change the world.” “Pens and books”, she said, “are the weapons that will defeat terrorism”. Global peace could only be achieved by educating “minds, hearts and souls”. After being shot by the Taliban in her native Pakistan in an effort to prevent girls being educated Malala received medical attention in Birmingham, which has become her second home.

The Library of Birmingham, unofficially christened the “People’s Palace”, is the largest public library in Europe and a flagship for the city and what it can offer to its young, ethnically diverse population. Malala, who has since become the youngest-ever recipient of the Nobel Peace Prize, was inspired by the futuristic new Library, a learning space open to anyone free of charge. 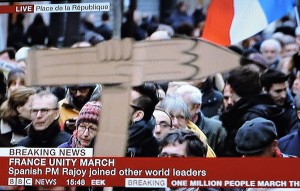 This afternoon, 11 January, I have been watching the scenes in Paris following the horrific attacks on free speech as journalists and cartoonists were gunned down on Wednesday at the offices of the magazine Charlie Hebdo, on a police officer, and on the Jewish community at a supermarket hold-up. Cartoons published in this morning’s press have focused on the idea that the pen is mightier than the sword, and among the crowds in Paris many people are holding giant pencils aloft.

Writers have a strong role to play in our democracy: journalists report on serious political events and sometimes put their own lives at risk by doing so. Shakespeare himself lived at a time when freedom of speech was not allowed, and writers were often forced to conceal their real meanings, even within seemingly innocuous plays. There has been much debate about Shakespeare’s own politics, and this speech of Shylock’s is often quoted as evidence that Shakespeare sided against Shylock not because of his ethnic or religious background, but because of his fanaticism. 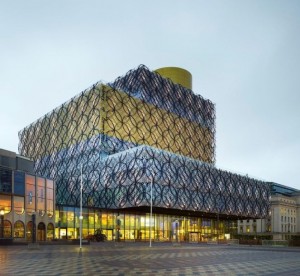 One of the glories of the Library of Birmingham is its Shakespeare Collections, its Victorian Shakespeare Room perched on the top of the building, the golden icing on top of the cake. The Shakespeare Library symbolised Birmingham’s international importance for intellectual achievement and idealism as well as industry.

Now massive cuts in opening hours and in staffing are threatening this world-class building and its services. It feels like a betrayal of Malala’s inspirational ideas. Shakespeare Institute Librarian Karin Brown and Fellow of the Shakespeare Institute Professor Ewan Fernie have written passionately about this subject and explain how to protest about these cuts. The official date for the end of consultation is tomorrow, 12 January so please, if you care about the Library of Birmingham, follow up the suggestions in her post.