Farewell to Alan Howard, the “great spirit” of the RSC 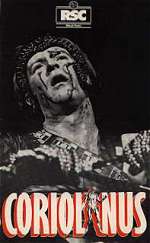 Tributes have been pouring in following the death on 14 February 2015 of the great Shakespearian actor Alan Howard, who did his best work at the Royal Shakespeare Company from 1966 to 1981. Although this was a golden period for the RSC with many great productions and actors, Alan Howard was the most dominant actor. It’s a great sadness that few of his stage performances were recorded apart from sound recordings now held by the British Library.

Howard’s voice was unmistakeable, but as Terry Hands said he had “the voice, the presence, the looks, the charisma and the intelligence”, making him unmatchable. Hands, former Artistic Director of the RSC, interviewed on Front Row on 19 February, chose three as his best performances: Oberon in the famous A Midsummer Night’s Dream in 1970-73, Henry V, 1975-77, and Coriolanus, 1977-8. (The interview begins about 10 and a half minutes in). But as has been pointed out time and again his major achievement was to play all Shakespeare’s Plantagenet kings from Richard II to Richard III with the exception of Henry IV (he was playing Prince Hal at the time), with the same director Terry Hands and designer Farrah. After leaving the RSC Terry Hands took on Theatre Clwyd in North Wales, revitalising the theatre. As it happens his final production before leaving the company, Hamlet, is playing until 7 March.

A few clips give a flavour of Alan Howard’s style: This South Bank Show special

is a great example, in particular the section where Howard and Michael Pennington go through a scene from Troilus and Cressida. (About 1hr 10 mins in)

This video is a clip of his tackling a speech from Coriolanus.

This clip shows Alan Howard and Sinead Cusack working on Richard III, in which they appeared together in 1980.

Sadly no clips of him performing scenes from Peter Brook’s A Midsummer Night’s Dream, though filmed by the BBC, are available online: his hypnotic delivery of the poetry was magical and completely different from how he performed these more aggressive roles.

Offstage, Howard didn’t draw attention to himself. He was shy, bespectacled, and in contrast to his virile on-stage presence, was diabetic. He appeared on the radio programme Desert Island Discs in 1981 while playing both Richard II and Richard III, making no attempt to perform for the listeners.

At the time when he came to work at the RSC, the late 1960s, the company was undergoing major changes as Peter Hall handed over to Trevor Nunn as Artistic Director, later sharing the role with Terry Hands. In her book about the RSC Sally Beauman (Howard’s partner and later wife) described the change. “Before RSC actors had been remarkable for poise, balance, weight, rationality; now, although the insistence on communicating the sense of the text remained unchanged, the approach was very different. Its characteristics were unpredictability, the permitting of inconsistency, the relish of ambiguity, the willingness to take risks; it was rather as if a generation of high-wire walkers had taken over from a team of superb civil engineers”.  Howard was one of these high-wire walkers.

In 2011, Rupert Christiansen wrote Howard seemed “to stand at a slight angle to the universe, wry, sardonic and sceptical.”  His interpretations were often unconventional. His Hamlet followed by just five years David Warner’s gentle prince, and his was described by Peter Roberts as “an intelligent and not insensitive neurotic”. In 1975 he took on Henry V, often viewed as jingoistic, in his hands a complex, tormented man. Harold Hobson reviewed it: “out of the depths of his anguish he utters some of the most ringing and thrilling calls to valour ever heard in a theatre”. His Richard III was a tour-de-force of villainy: “he weaves his verbal spells around his victims with the cunning of a snake and the devilish impishness of a medieval Quilp”.(KPC, Gloucester Citizen). 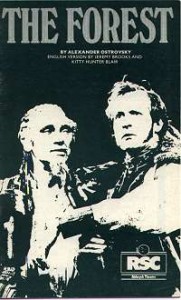 Richard Pasco and Alan Howard in The Forest

Few of the commentators have recalled that Alan Howard was also a superb comic actor. In Wild Oats he played Jack Rover with “elegance and swagger” and in 1981 performed in Ostrovsky’s The Forest at The Other Place playing a grand tragedian down on his luck with Richard Pasco as his down-trodden side-kick. In C P Taylor’s play Good, hardly a comedy, “he has the long, lean, worried face of a comic actor”, and he showed he could take a joke in the RSC’s panto, The Swan Down Gloves. The whole company let their hair down with a series of in-jokes including Howard as George, the Silent Dragon, moping about the stage entirely encased in armour until the very end when he removed his helmet and regained his voice. 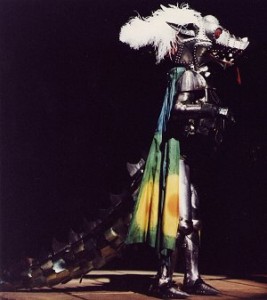 George the Silent Dragon in The Swan Down Gloves

It delighted RSC regulars who knew Howard’s ability to dominate any stage he appeared on. We shall not, indeed, look upon his like again.

Here are links to a few of the articles that have been published: The Guardian’s first announcement, and an obituary, and The Telegraph

If you’d like to find out more about Alan Howard I wholeheartedly recommend Jan Pick’s website that documents his career in fantastic detail (I’m grateful to it for the quotations from reviews, and for photos).

3 Responses to Farewell to Alan Howard, the “great spirit” of the RSC