“Let me see your archery”: from deadly conflict to courtly leisure 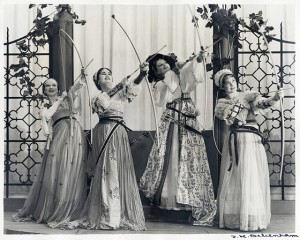 The French Princess and her ladies, Love’s Labour’s Lost, London 1936. Photo from the V&A

More than one scene in the TV series Wolf Hall has shown gentlemen and ladies of the court of Henry VIII practicing archery as a pastime. And in Shakespeare’s Love’s Labour’s Lost the Princess of France and her ladies take aim with their bows as part of a deer hunt, incidentally reminding us of that mischievous mythological archer, Cupid. Archery had become a symbol of genteel love rather than an essential skill for fighting.

A couple of centuries before, English archers had been renowned: they were responsible for important victories against the French, particularly the Battle of Crecy in 1346 and the Battle of Agincourt in 1415, the decisive battle in Shakespeare’s Henry V. Shakespeare understood that archers were usually kept separate from the main battle. In Henry VI Part 1, Talbot:
wanted pikes to set before his archers;
Instead whereof sharp stakes pluck’d out of hedges
They pitched in the ground confusedly,
To keep the horsemen off from breaking in.

On 3 February the BBC screened The Mary Rose: a Timewatch guide (available on Iplayer). The programme examined the history of the raising of Henry VIII’s flagship that sank at Portsmouth in 1545. The wreck has provided many surprises, including 137 intact longbows and 3,500 arrows. Before this discovery only five longbows survived. The programme showed the investigations into how the bows work, testing some of them to destruction. They now think that the draw weight could have been up to 160lbs, as opposed to 60 lbs for a modern bow. 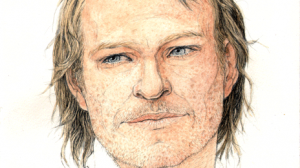 The face of the archer found on the Mary Rose

The men on the Mary Rose were elite soldiers. “The skeleton of an archer reveals he was in his early 20s and 178cm (5ft 10in). He was taller than many of the crew and well built, with strong legs. The middle of his spine is twisted, making one shoulder lower than the other – a feature is seen on other skeletons found with archery equipment. One of his right finger bones has grooves on the inside, forming a ridge. This could have been made by repeatedly pulling a longbow string. He was wearing a leather jerkin and a longbow was found nearby.” A reconstruction has been made of his face based on his skull, and more information is here.

The Mary Rose’s archer had spent years developing his skills and strength, but  everybody was supposed to be useful with a bow. Even in Shakespeare’s time the populace were to follow directions like this from 1363: “that every man in the same country, if he be able-bodied, shall, upon holidays, make use, in his games, of bows and arrows… and so learn and practise archery.”

In his Survey of London, published at the end of Elizabeth’s reign, John Stow gives a history of the city of London and its suburbs. He is not pleased that in 1498 at Moorgate, north of the city walls, gardens were destroyed “and out of them made a plain field for archers to shoot in”. By 1570 the Worshipful Company of Bowyers, originally the medieval Bowyers’ Company, was in decline, styling themselves “the “decayed Companies of Bowyers and Fletchers, Stringers and Arrowhead makers”. They petitioned Lord Burleigh who in the same year supported them by granting a commission for the “maintenance and exercise of shooting in the longbow and the debarring of unlawful games”. 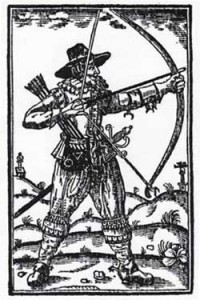 The Company’s website contains lots of information about the history of archery, including an extraordinary map dated 1594 of the area around Finsbury that shows the 194 permanent archery marks or targets in use in the area.

Stow also notes that just nearby, the area which had once been “inhabited, for the most part, by bowyers, fletchers, bow-string makers, and such like occupations, now little occupied; archery giving place to a number of bowling-alleys and dicing-houses.”

This part of London was well known to Shakespeare. The Theatre and the Curtain,  where he first worked, were both further north and beyond the city’s jurisdiction Shoreditch was dodgy and dangerous. The Moorfields area by contrast seems to have been marshy land unsuitable for buildings, but could be turned into productive or pleasant gardens.

Archery was practised all over the country. Alison Plowden, in her book Elizabethan England, notes that “archery …was still, in theory at least, compulsory for all able-bodied Englishmen between the ages of 17 and 60, and the inhabitants of every town were supposed to maintain the butts, or practice ground”.

Shakespeare would have learned to use a bow and arrow himself. In Stratford there was an area known as “The Butts”, marshy unproductive land near to Clopton Bridge, where men would practice archery. Nick Fogg, in his book about Stratford, notes that a document dated 1617, just after Shakespeare’s death, records a ditch being dug to enclose Butt Close. But as Alison Plowden says, in reality “the age of the long-bow was passing into history, and by Elizabethan times archery had become little more than just another leisure activity” suitable for Shakespeare’s princess and her ladies.