The mystery of Mr W H 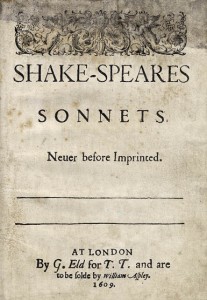 The headline read: “Has the mystery of Shakespeare’s sonnets finally been solved?” My thought was – which one?

The sonnets are puzzling in many ways. Do they tell  a real story, or are they purely fictional? What order were they written in? Who if anybody inspired the fair youth, the dark lady and the rival poet, supposed characters in the story of the sonnets? When were the poems written? Do they reveal Shakespeare as a homosexual?

Apart from all the mysteries about the poems themselves, there remain question marks over the publication. Francis Meres’ mention in 1598 of “his sugred Sonnets among his private friends” implies that Shakespeare didn’t want them published, but that was 11 years before they appeared on the bookstalls in 1609. How did they come to be published?

All these questions, and the constant flood of publications claiming to have “solved the mystery” have made me want to cry “Hold, enough!” 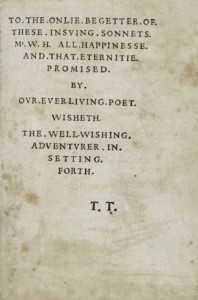 But then my attention was grabbed by the article with the headline quoted at the start of this post. And the mystery referred to is the identification of “Mr W H” who is mentioned on the deliberately cryptic dedication page by the book’s publisher Thomas Thorpe. The dedication reads: “To the only begetter of these insuing sonnets Mr WH. All happinesse and that eternitie promised by our ever-living poet wisheth the well-wishing adventurer in setting forth. TT [Thorpe].”

Many possibilities have been suggested for Mr W H, the two best-known being Shakespeare’s patron Henry Wriothesley, Earl of Southampton to whom Shakespeare dedicated his long narrative poems Venus and Adonis and The Rape of Lucrece, and William Herbert, Earl of Pembroke, to whom the posthumously-published First Folio was dedicated. It’s even been suggested that WH might be a misprint for WS, Shakespeare himself.

The new candidate is hitherto-unknown publisher William Holme who died in 1607, two years before the publication of the sonnets. According to the article, ” Geoffrey Caveney, an American researcher, has unearthed possible evidence to link the initials with William Holme, who had both personal and professional connections to Thorpe. Both came from prominent Chester families, were publishing apprentices in 1580s London and had strong connections with theatres through publishing major playwrights such as Ben Jonson and George Chapman.”

The implication is that WH somehow gained possession of the sonnets and on his death they were passed to Thorpe. I was under the impression that Elizabethan and Jacobean publishers had been quite thoroughly-researched so I was surprised that Holme’s name has not come up before, having the right initials.

The clues seem to have been there:” Caveney also finds Holme interesting because he published major playwrights of the day, including Jonson’s Every Man out of His Humour in 1600, and Chapman’s Monsieur D’Olive in 1606. Caveney’s research shows that Holme had a London bookshop and was a close colleague of the printer Adam Islip, who printed Every Man out of His Humour and worked with George Eld, who printed the Sonnets for Thorpe.”

To me what makes this a possibility worth considering is that Holme was a publisher, a colleague and perhaps friend of Thorpe. The tone of the dedication is familiar, and as Geoffrey Caveney points out Thorpe would never have addressed noblemen as plain Mr, or indeed with such informality. Eminent Shakespearean Professor Stanley Wells is interviewed in the article and also seems to find it worth pursuing, describing it as “better than any other suggestion so far”.

It has been suggested that the dedication deliberately conceals the truth about the sonnets, but maybe it wasn’t so obscure as we think it is. While the now-obsolete word “begetter” is usually used in regard to procreation, it was also used figuratively to indicate someone who originates something, or makes it come into being. And if the word refers to the edition rather than the poems themselves it makes sense.

The line about happiness and eternity is more difficult. Does it imply Mr W H is alive, or dead? Are the poems, that will live forever, to convey immortality on the author, the subject, or the person who procured the manuscript for publication? I’ve read that the phrase “setting forth”, though, was used to mean “published”, making it an appropriate phrase to be used by one publisher when writing about another.

Still lots of questions, and Caveney’s essay is unlikely to be the last word on this intriguing subject. The newspaper article contains a lot more information, and the full essay is going to be published in the February 2015 edition of the Notes and Queries journal.