William Blake and creativity in science and the arts 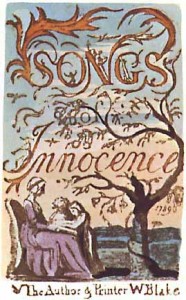 The title page of Songs of Innocence, 1789

What is creativity and where does it come from? Is there a place for creativity in science?

Shakespeare was one of the most creative of people, but the mysteries of his talent are impossible to pin down. William Blake, (1757-1827) was hugely creative, but his wild visions and strange visual style classed him as eccentric if not actually lunatic. But whether or not you are drawn to his poetic and artistic creations, he was a brilliantly skilled and innovative craftsman.

The Ashmolean Museum’s current exhibition, William Blake, Apprentice and Master, reviewed on the Wordworth Trust’s blog here, focuses on his long apprenticeship as an engraver, his early work and technical skills. Blake could have had a perfectly respectable career as an engraver had he followed the conventional route, but he developed a whole new method of engraving and printing. This enabled him to retain control over the whole process of creating books from the first sketch to finished object in which poetry and images appeared in colour on the same page.

It can be hard to fathom Blake’s mind through his images and poems, so the approach of the exhibition, looking at processes as well as ideas, offers a way into his thinking. It contains a mock-up of his studio, complete with press, to show him as a practical craftsman, not just a man with his head in the clouds. He didn’t care that his methods were too expensive and difficult to be commercially viable, rejecting, as did others in the Romantic movement, the idea that making money was important. 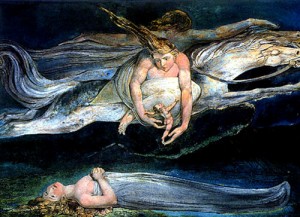 All creative people take inspiration from the work of others. It’s certainly true of Shakespeare, and Blake was inspired by poetic images such as Pity, based on Macbeth’s consideration of act of murder:
And pity, like a naked new-born babe,
Striding the blast, or heaven’s cherubim, horsed
Upon the sightless couriers of the air,
Shall blow the horrid deed in every eye,
That tears shall drown the wind.

The great imaginative writer Philip Pullman, author of the Northern Lights trilogy, is President of the Blake Society, and wrote a brilliant piece about Blake to coincide with the Ashmolean exhibition. He describes Auguries of Innocence as “one of the greatest political poems in the language, for the way it insists on the right to life and freedom without qualification, uniting large things and small, and shows the moral connections between them”. It contains unmistakeable echoes of Shakespeare’s King Lear. These lines are from the beginning of the poem:
To see a World in a Grain of Sand
And a Heaven in a Wild Flower
Hold Infinity in the palm of your hand
And Eternity in an hour
A Robin Red breast in a Cage
Puts all Heaven in a Rage
A dog starv’d at his Master’s Gate
Predicts the ruin of the State
He who shall hurt the little Wren
Shall never be belov’d by Men
The wanton Boy that kills the Fly
Shall feel the Spiders enmity

You can’t help hearing Lear’s “As flies to wanton boys are we to th’ gods./They kill us for their sport”, but here too are “mine enemy’s dog”  and the little wren, all mentioned towards the end of the play.  Pullman’s essay is a plea for the imagination, vision, and energy. “We need to be able to see contrary things and believe them both true…, despite the scorn of rationalists whose single vision rejects anything that is not logically coherent”.  “No symphony, no painting, no poem, no art at all was ever reasoned into existence.” 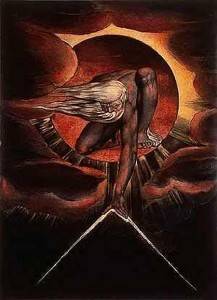 Hating war, Blake called Science “the Tree of Death”, and his visions were often apocalyptic. Artists and scientists have often seemed to have little to say to each other, but there is common ground. Recently we have seen less of the Dr Strangelove “mad scientist” and more people with normal though troubled lives. On film, Eddie Redmayne has played Stephen Hawking in The Theory of Everything, and Benedict Cumberbatch has played Alan Turing in The Imitation Game, and currently on stage John Heffernan plays J Robert Oppenheimer “the father of the atom bomb”. Oppenheimer focuses on the excitement of shared discovery and ends as Oppenheimer’s tragedy.

BBC Radio 4’s Start the Week on 26 January was a terrific discussion between scientists and artists on Organising the Mind. Apart from the “Eureka” moment, scientists tend to play down the importance of creativity in favour of logic and proof. But the “primordial soup” of ideas from which poet Frances Leviston’s poetry emerges during a period of intense concentration was agreed to be not so different from the way in which scientists develop theories. Mozart and Shakespeare were both cited as people whose creativity was supported by the rules and boundaries within which they worked, as did Blake, and as do scientists.

Frances Leviston talked how she prepares to write a poem, doing research but not in an organised way, and while detail can be interesting “I can’t be inhibited by the truth”. The author of Oppenheimer, Tom Morton-Smith, researched the science, but is not a scientist and admitted in discussion that it was good not to know too much, as “anything that’s interesting and enlightening to me will probably also be interesting and enlightening for the audience”, a thought for anyone contemplating how Shakespeare might have known so much about law, the sea and so on. 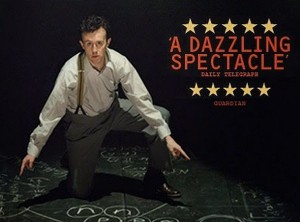 The radio programme is there to be listened to for months, but Oppenheimer is almost completely sold out until the end of its run on 7 March. The Blake exhibition closes on 1 March.

Blake’s visions continue to influence our imaginations and our understanding of science. The image now being used to promote Oppenheimer is a direct take on Blake’s famous vision of Urizen creating the Universe.