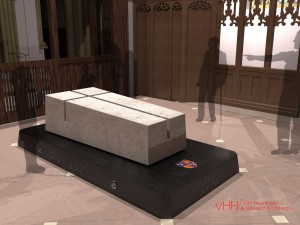 The planned tomb of Richard III

The remains of King Richard III will at last be reburied at Leicester Cathedral on Thursday 26 March 2015. Over 100 events and activities will begin on Friday 20 March and will continue over the weekend following the ceremony.

It’s over two years since the King’s remains were found, the story turned into the documentary The King in the Car Park. There have been hiccups along the way: a judicial review followed a legal challenge fought by some of Richard’s descendants to get him a state funeral and burial elsewhere, but nobody can now deny that Leicester is doing King Richard proud. There has been interest from around the globe and to quote the official website “Organisations across the city and county will be inviting people to joint them for what promises to be a momentous week for the area, as the eyes of the world focus on the final journey of the last King of England to die in battle.” 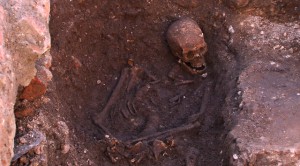 The skeleton of Richard III

The ceremony itself will be shown live on Channel 4 (more details here) and they are expecting huge crowds, most of whom will watch via two giant TV screens in Leicester city centre. The remains have been kept at the University of Leicester where the forensic and archaeological work has been done, and on Sunday 22 March it will be taken to the battlefield where Richard died, to nearby villages where soldiers killed in battle were buried, and from there, echoing his last journey, back to Leicester where the coffin will lie in state for three days before the interment. 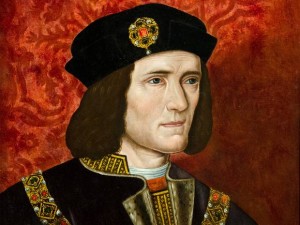 In the past two years the city has invested in sites related to the Richard III story. The Cathedral has spent £2.5 million on a re-ordering of its interior including a new site for the tomb, a new high altar and a new cathedra or seat for the bishop. The Guildhall contains new displays explaining the medieval history of the city and the new Richard III Visitor Centre focuses on the King and the story of his discovery. There are town trails, recitals, lectures and many other events all of which will make Leicester a leading tourist site for those fascinated by England’s medieval past, and those wanting to find the truth about Shakespeare’s villainous king. Unwilling to forget Richard’s murderous reputation as promoted by Shakespeare, during the week of the reburial Channel 4 will be screening a new drama/documentary entitled Who Killed the Princes in the Tower?

Some people, naturally, aren’t happy and even seem to fear that the proceedings in Leicester might reignite the Wars of the Roses. You can read more here.

Again, quoting from the excellent website, “King Richard’s remains will make their final journey, returning to the Battlefield and thence back to Leicester, this time accorded proper dignity and honour as befits him both as man and King, and laying to rest old enmities.”

I’ve found it really interesting to read how the key organisations in the Leicester area have pulled together to form the Cathedral Quarter Partnership, creating the dedicated website and working in partnership to respond “to the unique opportunities presented by the discovery of the remains of King Richard III in Leicester. It’s a great example of collaboration and cooperation, existing “to enable visitors and local people of all ages and backgrounds to get the most from all the Cathedral area of the city will have to offer.” 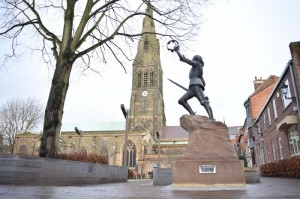 Things to see and do

This entry was posted in Legacy and tagged archaeology, Richard III. Leicester, The King in the Car Park. Bookmark the permalink.