Much Ado About Nothing online 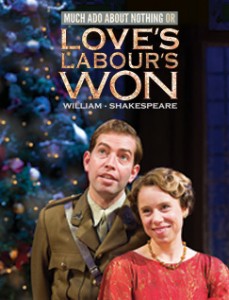 Today 2 March 2015 the RSC’s first Massive Open Online Course (MOOC) begins, on the play Much Ado About Nothing. Previous courses I’ve done with Futurelearn have remained open for a few days so if you’re not already enlisted I’m pretty sure there is still time if you want to join in. It’s a collaboration between the RSC, The Shakespeare Birthplace Trust and the University of Birmingham’s Shakespeare Institute. The course is open to anyone, anywhere, and it’s free so there is nothing to lose. It’s primarily aimed at 16-19 year olds, but don’t let that put you off as there will be plenty to enjoy regardless of your age or level of knowledge.

As an introduction, here is a link to the blog posted by Jacqui O’Hanlon, RSC Director of Education, where she explains about the creative choice made in rehearsal, and why this process is so important when looking at any of the plays. It helps students understand that there is no right way of performing any of Shakespeare’s plays, and that rather than seeing the plays as distant and fully-formed, today’s students can make perfectly valid choices about Shakespeare’s plays.

The MOOC is closely related to the RSC’s current production of Much Ado About Nothing (currently under the title Love’s Labour’s Won in the RSC’s schedules). The play remains in the repertoire until 14 March, and will be shown in cinemas as a live relay on 4 March.

Even if you’re not able to see the current RSC production there will be much to enjoy in this 4-week course. In week one, Nick Walton from the Shakespeare Birthplace Trust’s education team will be talking about how the play would have been staged originally, and how it reflects the time in which Shakespeare lived. In the second week Dr Abigail Rokison from the Shakespeare Institute will look at the stage history of the play with a particular focus on its more serious side.

The final two weeks will focus on the RSC’s production, interviewing Edward Bennett and Michelle Terry (Benedick and Beatrice), and the director of the show Christopher Luscombe who knows the play inside-out since he performed as Dogberry in a previous production of the play for the RSC. Scenes from the current production will also feature.

The MOOC will aim to highlight how creative choices are made for productions, and how different decisions can be arrived at for each and every production. Photographs of past productions make very clear the differences from one production to another, depending on a whole lot of variables: creative team, actors, and external factors such as what is happening in the world. The current production has been heavily influenced by the centenary of the outbreak of World War 1. At the start of the play, Benedick and his friends are returning from a usually unidentified war. In this production they are clearly coming back from the trenches, and some are damaged physically or psychologically. Pinning it down to this particular time has a real impact on how the play has been interpreted, as well as providing inspiration for the costumes and sets. 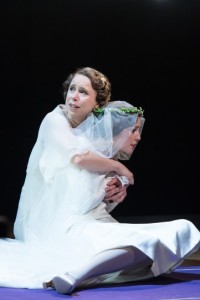 Much Ado About Nothing is one of Shakespeare’s most popular comedies, and one which has been associated with the theatre in Stratford ever since 1879: it was the first play ever performed in the original Shakespeare Memorial Theatre. Although it’s a comedy the play contains its fair share of serious scenes, and its treatment of women has made it controversial over the last 40 years or so, giving those studying the play much to discuss.

Like over 3,500 other people I’m signed up for the course and look forward to four weeks of enjoyable exploration of Much Ado About Nothing. There will be lots of opportunity for learners to interact with each other during the course, so maybe I’ll see you there!