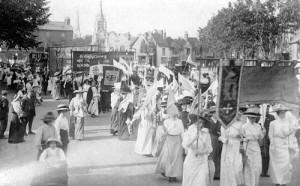 The suffragettes’ march in Stratford 16 July 1913. Photo from Windows on Warwickshire

This week, 8-13 March, International Women’s Week has been celebrated around the world with an examination of the achievements of women and progress towards gender equality. Amanda Vickery’s three-part television series Suffragettes Forever! has documented the history of the struggle of women in the UK for the right to vote, ending with her assessment that, 100 years on from the era of the suffragettes, there is still a long way to go. The series has been an uncomfortable reminder of the force-feeding of imprisoned women and the violence which the suffragettes felt they were forced to use because promised new laws repeatedly failed to materialize.

This week too the Shakespeare Club in Stratford heard a lecture by Dr Sophie Duncan on Shakespeare and the Suffragettes. Shakespeare was adopted by the suffragettes and suffragists because of the independent outspokenness of some of his heroines, women who make things happen, particularly for other women in the plays. There will be more of this in a future post. She included in her talk a description of the suffragette movement in Stratford. We tend to think of Edwardian Stratford as an old-fashioned backwater, and certainly before the First World War Frank Benson was promoting Stratford as a centre for traditional English folk culture, looking back rather than forward. 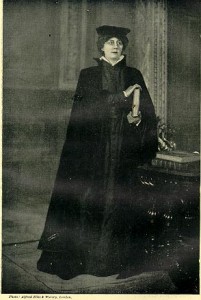 Whatever Benson’s personal feelings might have been about the suffragette movement, the Shakespeare Memorial Theatre and its Festivals provided a focus for it. Actresses were outspoken, eloquent, attractive, often financially independent and unconventional. Ellen Terry was the most famous actress of the time and a supporter of the suffragette movement as well as being closely involved with the Memorial Theatre. The Actresses’ Franchise League was formed in 1908 and was supported by many of the actresses who appeared at the Shakespeare Festivals: Margaret Halstan (Imogen 1909), Lena Ashwell (Rosalind 1911), Constance Collier (Juliet 1908, Portia 1909, 1911), Gertrude Elliott (Ophelia 1908), Violet Vanbrugh (Portia 1907, Beatrice 1910, 1911, 1913, Kate 1912). Having actresses involved in the suffragette cause playing Shakespeare’s women made a powerful statement about womens’ rights.

Stratford itself was not without suffragists. A branch of the Women’s Suffrage Society was formed in the town in 1907, but it was a by-election in the town held in 1909 that brought the question of women’s right to vote into focus. Suffragists gathered under a yellow and black banner bearing Shakespeare’s most famous line “To Be or Not To Be”, suffragette badges could be bought in the town and public meetings were held every day. The suffragettes ceased to campaign on 23 April in honour of Shakespeare’s birthday and took part in the parade, but on the following day Christobel Pankhurst addressed two packed public meetings in the town. On 1 May the International Woman Suffrage Alliance came en masse to Stratford to see Cymbeline in which Margaret Halstan was appearing as Imogen. The election followed just three days later. From 1909 to 1913 suffragettes were regularly seen in Stratford at the time of the Birthday Celebrations, and there were other events. In the autumn of 1909 two plays were presented at the Corn Exchange starring Edith Craig, the daughter of Ellen Terry, entitled A Woman’s Influence and How the Vote Was Won. At the time of the 1911 Festival Ellen Terry spoke on  Shakespeare’s heroines and Mrs Leo Grindon gave a lecture entitled Othello from a Woman’s Point of View. 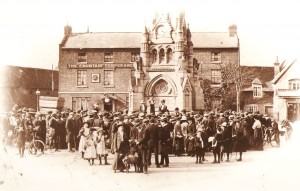 The suffragettes meeting in Stratford, 16 July 1913

In June 1913 Emily Davison was killed at the Epsom Derby, and just a month later on 16 July a march of 56 suffragettes from Carlisle to London came through Stratford, accompanied by supporters from other places including Birmingham. The marchers visited Shakespeare’s grave before holding a public meeting in Rother Market. The photographs seem to have been taken before the disorder began, following the first speaker’s address. Nicholas Fogg describes it: “Unruly spirits in the crowd began a barrage of continuous heckling. The mob surged towards the platform and several ladies were jostled. Arrests were made, but the cacophony was irrepressible. The crowd was clearly organised to prevent the speeches and the meeting was abandoned, but from another platform the formidable Mrs Despard…awed the remnant of the crowd into silence”.  He also notes that the vicar, Mr Arbuthnot, spoke up for the suffragists who “whether we agree with their views or not, are peaceable citizens and entitled to that free speech, which, within the rights of the law, is the birthright of every Briton”.

The outbreak of war in 1914 ended, at least temporarily, most of the protests of the suffragettes. It’s pleasing, though, to find that almost exactly 100 years before Sophie Duncan’s visit, in November 1915, Mrs Edgar Scriven addressed the Stratford Shakespeare Club on Shakespeare – Women – Human Nature, arguing that Shakespeare would have supported women’s claim to full citizenship.

As well as Sophie Duncan’s talk, and information from newspaper reports, I’ve found many details in Nicholas Fogg book Stratford-upon-Avon: Portrait of a Town and the recently-published update Stratford-upon-Avon: the Biography. Susan Carlson’s excellent essay The Suffrage Shrew is available to read online here as pages 85-102 of Shakespeare and the 20th century: the selected proceedings of the ISA World Conference, Los Angeles, 1996.

One Response to Shakespeare, suffrage, and Stratford-upon-Avon