Still looking for the truth about Richard III: who did kill the princes in the tower? 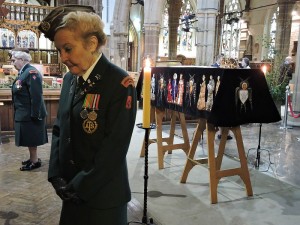 The coffin of Richard III in Leicester Cathedral

Like many thousands of others I visited Leicester on Monday 23 March 2015 to file past the coffined remains of Richard III before they are reinterred in the Cathedral on Thursday. People waited up to four hours, and many in the queue held white roses, the symbol of the house of York, others wore boar-shaped brooches. We met people from Ludlow, Norfolk, the North East, and South Wales, and although they had followed the excavation, they seemed to be compelled as much by witnessing a unique event as by the honouring of a long-dead monarch. We also visited the Richard III Visitors’ Centre and the Guildhall, all close together. Even after Thursday there will be much to see in the city and at the site of the Battle of Bosworth where Richard died, just a few miles away.

In the exhibition, apart from the fascinating forensic and archaeological investigations relating to the finding of the body, I was particularly interested in the discussion of Richard’s achievements as a king, and the section about Shakespeare’s play. After 500 years in which we have been told Richard was a monster they are understandably keen to emphasise the positive side of his life. Richard brought in laws to protect the rights of his subjects, such as the right for those accused of crimes to be considered for bail instead of being imprisoned until trial. I may have missed it in the crowded exhibition, but I didn’t notice a reference to the other side: Richard ignored the law of the land by summarily executing Lord Hastings, a member of his council, without any form of trial.

In his play Shakespeare makes much of this dramatic event, writing a whole scene (Act 3 Scene 4) around the downfall of Hastings. In the play, Hastings’ reluctance to accept Richard’s coronation is enough for Shakespeare’s Richard to condemn him, but although the scene is in essence correct, the truth was probably more complex. The historical facts seem to confirm Richard as an opportunist, not above acting ruthlessly in the face of a threat, rather than Shakespeare’s plotter. 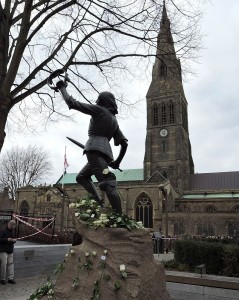 The statue of Richard III at Leicester Cathedral, with white roses

In the middle of Henry VI Part 3 Shakespeare gives Richard a wonderful speech about his ambition to be King. Here’s an extract:
And yet I know not how to get the crown,
For many lives lie between me and home….
Why I can smile, and murder whiles I smile,
And cry “Content!” to that that grieves my heart,
And wet my cheeks with artificial tears,
And frame my face to all occasions…
Can I do this, and cannot get a crown?

The worst crime of which Richard is accused is the murder of the little princes in the tower, the sons of Edward IV aged 12 and 9. A Channel 4 documentary Richard III: The Princes in the Tower was screened on Saturday evening.

In Shakespeare’s play Richard is of course guilty. “Shall I be plain?” he says: “I wish the bastards dead”. The documentary considered other possibilities, but it’s a pity it was, as this review put it, “all spectacle and no substance”. 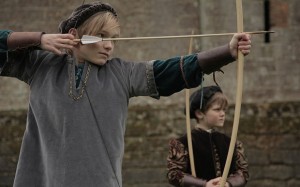 Richard III: the Princes in the Tower

Specialists and academics gave their opinions, but there was no discussion, no comment on what anyone else said, held together by some unconvincing dramatized sequences. The programme did at least clarify the sequence of events, and noted that Shakespeare was only repeating the contemporary view of events promoted by, among others, Thomas More. The conclusion of most of those who were consulted was that Richard probably had been responsible for the murder, possibly persuaded by Buckingham.

With breathtaking political naivety one of the speakers suggested Richard had no motive for the murder, since once the princes had been proclaimed illegitimate and Richard was crowned, he had no need to fear them. He should read Richard II, where the king considers the fragility of anyone’s hold on the crown:
For God’s sake, let us sit upon the ground
And tell sad stories of the death of kings;
How some have been deposed; some slain in war,
Some haunted by the ghosts they have deposed;
Some poison’d by their wives: some sleeping kill’d;
All murder’d.

In another investigation, The Daily Mirror asked a retired Scotland Yard detective, Peter Kirkham, to review the evidence. Although he doesn’t go into all the alternatives, he concludes: “As a professional investigator, my favoured hypothesis is that the princes were murdered on the orders of Richard III. He was the only individual with the clear motive and the opportunity.” 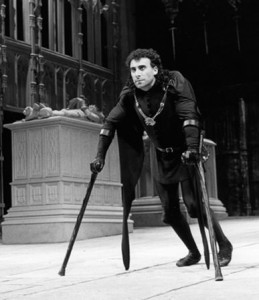 One of the results of the reconsideration of Richard’s character could be a reluctance to perform Shakespeare’s play. On Monday, actor Antony Sher, who played a full-blooded Richard in 1984, was interviewed on Radio 4’s Today programme. He insisted we must never stop doing it. Richard is “a fantastic, powerful, charismatic figure” in one of Shakespeare’s great plays. “It’s exciting, it’s funny, it’s dangerous”. And although we “must not come to Shakespeare’s play expecting a history lesson” it’s a politically important play because it is a “study in tyranny”. He also performed part of the famous opening speech in the play. It’s right at the end of the broadcast, 2 hrs 55 minutes in.

We’ll probably never know the truth about the disappearance of the princes in the tower, or exactly what sort of a man Richard III really was. But Shakespeare’s play has helped to ensure that, 500 years on, we’re still talking about him.

7 Responses to Still looking for the truth about Richard III: who did kill the princes in the tower?