Celebrating Shakespeare’s 451st birthday on both sides of the Atlantic 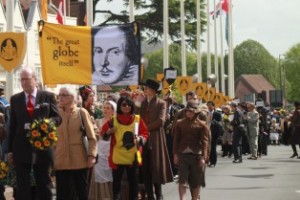 April is a special month for Shakespeare-lovers, as we celebrate both the birth and death of William Shakespeare in 1564 and 1616. The birthday is traditionally celebrated on the 23rd, three days before his baptism at Holy Trinity Church was entered in the parish register. This year the birthday falls on a Thursday, and in Stratford-upon-Avon this is when the fun begins, continuing until Sunday afternoon. Unusually, then, this year’s celebrations cover the whole period from the date on which it’s assumed Shakespeare was born right up to the date of his baptism on 26th. The main site is here  and don’t forget you can support the celebrations even if you’re not able to attend in person.   This page contains a summary of what’s going on as well as a link to the full timetable for the day for all the events including those organised by the Royal Shakespeare Company and Shakespeare Birthplace Trust. 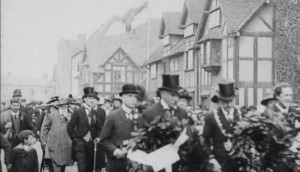 Processions on foot through Stratford have been held off and on for almost two hundred years. The British Film Institute features on its website a clip showing the 1915 procession beginning at the Birthplace and approaching the door to Holy Trinity Church. The actor-manager Frank Benson features prominently.  This clip is similar but includes the unfurling of the flags in Bridge Street. 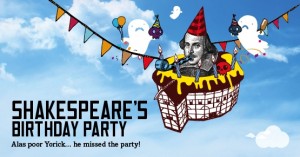 You can begin to celebrate the birthday by visiting London’s Shakespeare’s Globe on Sunday 19 April. They are holding a free family fun day with lots of activities and events including free visits to the exhibition, cake, and a showing of the Hamlet films by Olivier, Branagh and Zeffirelli, and the Disney version The Lion King, for £5.

For those not able to get down to London, on the same day Shakespeare’s Globe is also launching Shakespeare’s Globe 360.  This is a free app available from the Apple Store that allows anyone in the world to stand inside and explore a 360-degree photo-real virtual version of the famous ‘Wooden O’ theatre. It will use augmented reality to digitally recreate a fully interactive Globe Theatre, the space for which Shakespeare wrote most of his plays.  Patrick Spottiswoode, Director, Globe Education is excited that the Globe Theatre will be available to everyone: “Sam Wanamaker, the Globe’s founder, asked over and over again what we might do for the “child in Stornoway” who was not necessarily going to be able to come to Shakespeare’s Globe in London. He would have loved the digital world and would love this app which allows students in Stornoway or Shenyang in China the opportunity to explore the Globe Theatre for themselves in their homes or classrooms.”

Across the Atlantic in Washington, DC, the celebrations have already begun. The Folger Shakespeare Library’s annual Shakespeare Birthday lecture took place on Thursday 16 April. Professor Lynne Magnusson gave a lecture which was the opening event of the Folger Spring Symposium on Shakespeare’s Language, that continues on 17 and 18 April.

Then on Sunday 19 April the Folger Shakespeare Library holds its annual celebration of Shakespeare’s Birthday with a family party from 12-4pm. There will be swordfighting demonstrations, the chance to speak in the Folger’s own theatre, and the opportunity to tour the Folger’s beautiful reading rooms. And like all birthday parties, there will be cake. 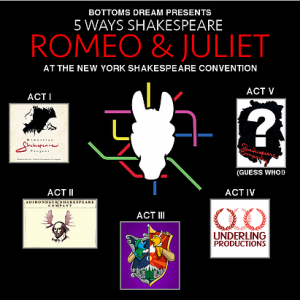 All the events I’ve mentioned so far have been going for years, particularly those in Stratford itself. But this year the first annual New York Shakespeare Convention will be held to mark the author’s 451st Birthday week, on Saturday 25 April at Speyer Hall, 184 Eldridge Street, Manhattan, from 2-5pm. Many of the events are free, and as this is all new, I’m reproducing most of the press release below.

In response to the outpouring of public interest in the plays of William Shakespeare,the independent community of artists and companies that produce his works in New York City are collaborating on a one-day spectacular to celebrate his 451st birthday week.
ShakesCon, in its inaugural year, will feature booths by Puppet Shakespeare
Players, Adirondack Shakespeare Company, Manhattan Shakespeare Project, and
many more! While networking, visitors to the exhibition will enjoy live music, industry
panels, and birthday cake for Mr. Shakespeare.

At 7pm, host company Bottoms Dream will debut a one-night-only performance of Romeo and Juliet, in collaboration with five convention companies. Each company
will perform an act of the play in their signature style. 5 Ways Shakespeare gives
audiences one play with five artistic interpretations.

Convention producers Nat Angstrom and Caitlin White, of Bottoms Dream, hope that visitors to the convention will experience firsthand the groundbreaking work and potential for creativity in their community.

“ShakesCon is a destination for all actors, audiences, and educators, regardless of
their familiarity with Shakespeare’s plays,” says White. “They can browse for
programs that appeal to their individual tastes.” Adds Angstrom, “This is an
opportunity for those frustrated and alienated by Shakespeare’s language to finally
find an interpretation that connects and makes sense.

Shakespeare’s Birthday will undoubtedly be celebrated in many other places around the world. I hope you’ll find somewhere near you to raise a glass (or maybe eat a slice of cake) to honour the memory of the greatest dramatist in the English language.