Cheek by Jowl’s Measure for Measure coming to your laptop! 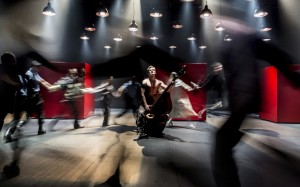 A scene from Cheek by Jowl’s Measure for Measure

Cheek by Jowl’s Russian-language production of Measure for Measure, currently at the Barbican Theatre in London until 25 April, has received fantastic reviews. It’s been sold out for over a month, astonishing considering it’s being performed in Russian with surtitles. It’s also going to Oxford Playhouse from 28 April-2 May. And now, on Wednesday 22 April there’s to be an opportunity for us to watch this production at home via a live stream: we don’t even have to go to a local cinema, though I suspect a fast broadband link is necessary.

The live streaming will be available via Cheek by Jowl’s website or by the Telegraph website. It begins at 7.15  and will run for under 2 hours without an interval.

With an all-Russian cast, the production has already been a great success in Moscow where it was hailed as “a shattering portrait of contemporary Russia”. (Novaya Gazeta). This quote is from the company itself:
“A ruler who doesn’t know how to rule, a bureaucrat seduced by his newfound position and a novice nun faced with an appalling dilemma. In this chaotic world, where prisons, convents and brothels are policed by a corrupt regime, only conflict and self-interest prevail.

Shakespeare’s brew of laughter and high seriousness asks questions about the relationship between ordinary citizens and those in power. Declan Donnellan draws out their topicality with his taut modern-dress update, matching Russian theatre traditions with swiftly changing scenes played out in vivid abstract settings“.

In this country it’s not only being seen as a critique of Russian politics, but of our own. Sexual politics, and corruption at all levels from government and the justice system are hot topics, particularly in the run up to a general election. It’s also a play about religion and the relationship between public and private behaviour. Measure for Measure provokes many difficult questions and leaves many of them hanging in the air at the end of the play. Famously, Isabella has no words to speak after the Duke asks her to marry him, but this is only one of the unresolved issues. Who is to blame for the events of the play; the Duke who absents himself leaving an inexperienced person in charge, or that person, Angelo, who shows himself to be no better than those he condemns? Is it right to  punish Lucio for slandering the Duke when he has been misled? Is Isabella right to put her religious faith ahead of the life of her brother?

This production has been called “gripping”, “thought-provoking”, “breathtaking” and “uncompromising” and Kate Bassett in The Times said “Declan Donnellan’s Russian cast are so electrifyingly intense and disturbing that they make your hair stand on end.” Here is the Guardian’s review, and this is from the Telegraph. Don’t miss it!

If you’d like to see more about the production, this is the trailer,

and this video includes a discussion about the production by the creative team.

This entry was posted in Shakespeare on Stage and tagged Barbican, Cheek by Jowl, Measure for Measure, Russian. Bookmark the permalink.