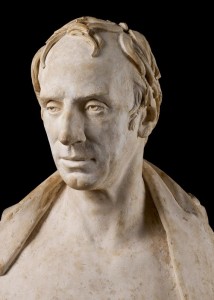 A plaster model for a bust of Wordsworth, at the Ashmolean Museum, Oxford

7 April 2015 was the 345th birthday of William Wordsworth, the Romantic poet most closely associated with nature, and one of England’s greatest writers. Like Shakespeare, houses associated with Wordsworth have been turned into literary shrines, though Shakespeare’s birthplace was already attracting visitors before Wordsworth was even born.

This year, Twitter seems to have been buzzing with tweets about Wordsworth’s birthday, perhaps because it coincides with the Easter holidays, and with some fine spring weather. Although several of his houses are open, including his birthplace in Cockermouth and the house which he made his home after his marriage, Rydal Mount, it’s Dove Cottage, the picturesque cottage in Grasmere, that fires the imagination. We all like to see the little rooms where he and his sister Dorothy lived humbly before he became well-off later in life.

Jeff Cowton has written a view of Wordsworth from his point of view as Curator at Dove Cottage. Their celebrations of Easter and Wordsworth’s birthday have included something for everyone: egg hunts for the children and a celebration of words for adults. He considers what an exhibition about a writer should be like and quotes Helen Darbishire’s concern “with the poet and his poetry, and with Wordsworth himself only insofar as knowledge of his life and character deepens understanding of his poetry”. It’s a quandary that all literary houses face, including Shakespeare’s.

The Dove Cottage blog includes a post by Jonathan Kerr on a new project: “On the eve of William Wordsworth’s 245th birthday…some of Britain’s finest contemporary poets are engaged in a project they call The New Lyrical Ballads. This collection pays homage to The Lyrical Ballads (1798), the book of poems Wordsworth co-authored with his friend Samuel Taylor Coleridge, and now recognized as central to the flowering of British Romanticism. ” 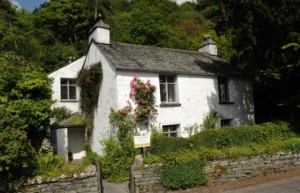 Another blog post from Dove Cottage includes a guided walk around Grasmere, the village Wordsworth came to live in, and where he is buried in the village churchyard. Walks around the Lake District are seldom solitary these days, partly due to Wordsworth’s unintentional popularising of the area. In 1906 Virginia Woolf wrote an article about Wordsworth’s Guide to the Lakes.  Wordsworth and the other Romantic poets made people see nature very differently. Here is Woolf : “it is as easy for him to see heaven in the earth as to see grass and stones there. Indeed, his quiet assumption that not only mountains, trees and lakes, but the most minute changes of leaf and herb, are the seriously important things in all lives, amusing as it is at first, persuades us in the end that it is, or should be, really so. For in Wordsworth’s eyes this spectacle of the country-side which we find variously pleasant or delightful as a relief from other things is the most solemn truth that exists.”

Wordsworth gives ” the impression that a walk among the lakes is to be undertaken in a spirit of reverence”, a sensation different from Shakespeare’s, but Woolf’s description of his view of the life of the humble shepherd is very similar to that voiced by the King in Henry VI Part 3:”[Wordsworth’s] usual austerity almost breaks into tenderness when he speaks of the little republics of shepherds and farmers which lie among the hills. Theirs was the perfect life whose constitution had been “imposed and regulated by the mountains which protected it”. For Shakespeare’s king,
Ah, what a life were this! how sweet! how lovely!
Gives not the hawthorn-bush a sweeter shade
To shepherds looking on their silly sheep,
Than doth a rich embroider’d canopy
To kings that fear their subjects’ treachery?

In another blog post, Stephen Gill asks why Wordsworth still matters. One answers is the idea that ‘men who do not wear fine clothes can feel deeply’.  Gill suggests ” His poems are not tracts in verse, but imaginative embodiments of the variety of ways in which human beings survive in the face of adversity and loss.” In this too, Wordsworth resembles Shakespeare, whose characters  confront the most tragic of events.

He goes on to suggest that Wordsworth was capable of  ‘awakening the mind’s attention from the lethargy of custom, and directing it to the loveliness and the wonders of the world before us; an inexhaustible treasure, but for which in consequence of the film of familiarity and selfish solicitude we have eyes, yet see not, ears that hear not, and hearts that neither feel nor understand’, sentiments that apply to Shakespeare too.

The most famous example of Wordsworth making us see the familiar anew is his best-known poem Daffodils. A vision of the delicate wild flowers returns to him “in vacant or in pensive mood” bringing pleasure to the solitary. It’s always fascinating, as Jeff Cowton notes, to see the reworking of a piece of writing as it is created, and the British Library has put online manuscripts of Intimations of Immortality and Daffodils.

Great as Wordsworth is, my favourite descriptions of daffodils remains Shakespeare’s in The Winter’s Tale, where they are brave adventurers, symbols of youthful love:
daffodils,
That come before the swallow dares, and take
The winds of March with beauty.