Cakes, ale and hearing the chimes at midnight 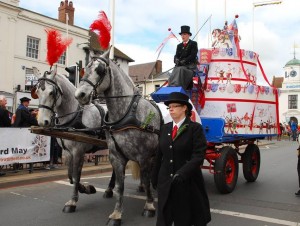 Last weekend we remembered, again, the birthday of William Shakespeare. In Stratford tradition is important, so the boys of Shakespeare’s school still head the procession as they have done for over a century. The celebration is also a birthday party, so it’s perhaps surprising that 2015 was only the second time that a birthday cake has been part of the proceedings, with a horse-drawn giant cake in the procession and cupcakes distributed on the day. We make special cakes to mark important events in our lives: birthdays, weddings, Christmas. In Twelfth Night the killjoy Malvolio tries to put a stop to Toby Belch’s late-night party, and Toby dismisses him “Dost thou think because thou art virtuous, there shall be no more cakes and ale?” 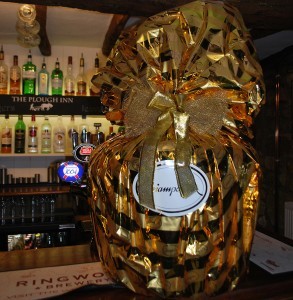 Cakes are more than just an indulgence: the celebrations of which they form a part are spent with those who are most important to us, and make up some of our strongest memories. A fortnight ago I spent an enjoyable weekend with friends, relatives and neighbours, raising a bit of money for charity at the same time as sharing a giant Panettone cake made by the Giampaoli company in Ancona in Italy. I was lucky enough to win the cake by guessing its weight (a massive 11kg). The cake had previously been raffled at the Plough Inn in Stretton on Fosse and raised £150 for Shipston Home Nursing, a charity offering hospice-type care at home.

It seemed appropriate to donate the money raised to a charity that works with memory, and we raised over £150 for the local charity Warwickshire Reminiscence Action Project (WRAP) that helps to improve the quality of life for dementia sufferers and their carers by encouraging reminiscence. Their latest venture is Cafe WRAP where people can drop in on Friday afternoons at Bishopton Community Centre.

Shakespeare’s characters often recall events from the past, and their stories give depth and humanity to them as well as being entertaining in their own right. In Romeo and Juliet the speech in which the Nurse remembers Juliet as a toddler is one of the most memorable moments in the play and one of the greatest speeches for an older female actor.
On Lammas Eve at night shall she be fourteen.
That shall she; marry, I remember it well.
‘Tis since the earthquake now eleven years,
And she was wean’d – I never shall forget it –
Of all the days of the year upon that day.
In the same play Capulet and his cousin reminisce about feasts thirty years before: “you and I are past our dancing days”.

It’s not just the old who remember: Shakespeare gives memory tremendous power over his people: the Ghost in Hamlet commands “Remember me” and Hamlet promises: Remember thee?
Ay, thou poor ghost, while memory holds a seat
In this distracted globe.

In Twelfth Night Viola and Sebastian use their memories of their dead father to identify each other: “My father had a mole upon his brow. And so did mine”. “O that record is lively in my soul” says Sebastian. The Macbeths think they can (literally) wash their hands of the murder of Duncan and live unaffected by it, but the past takes an unexpectedly tight grip on them both. Macbeth can’t forget the predictions of the weird sisters, and Lady Macbeth is haunted so vividly by her memories of the murder of Duncan that she walks and talks in her sleep, condemning herself. 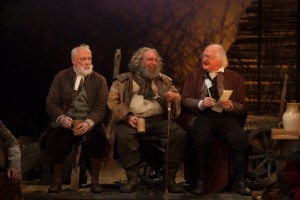 But memory is most often associated with old age. In Much Ado About Nothing, Dogberry says of Verges:
A good old man, sir; he will be talking: as they
Say, when the age is in, the wit is out.

Talking to Reynaldo in Hamlet, Polonius forgets what he was about to say, and in Henry IV Part 2 Shakespeare writes one of the warmest and most nostalgic of scenes.  Justice Shallow reminisces with Justice Shallow about the people they knew in their youth many years before: “Jesu, Jesu, the mad days that I have spent! And to see how many of my old acquaintance are dead!” Shallow asks Falstaff, “O, Sir John, do you remember since we lay all night in the Windmill in Saint George’s Field?”, fifty-five years before. Falstaff responds “We have heard the chimes at midnight, Master Shallow”.

Memories can recall happy or sad events, but it’s sometimes just the act of remembering that’s important. We have recently also been marking one hundred years since the start of the Gallipoli campaign, honouring the thousands of servicemen who died there, men who never had the chance to recall the days of their youth with cakes and ale.

One Response to Cakes, ale and hearing the chimes at midnight