Love, whose month is ever May 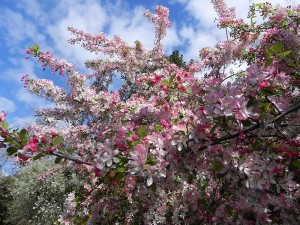 Mayday has long been celebrated as the real beginning of spring, marking the return of life after the cold and dark of winter. Nicholas Breton, writing in Fantasticks, describes the pleasures of the month:

“It is now May, and the sweetness of the air refresheth every spirit: the sunny beams give forth fair blossoms, and the dripping clouds water Flora’s great garden: the male deer puts out the velvet head, and the pagged doe is near her fawning: the Spa-hawk now is drawn out of the mew, and the fowler makes ready his whittle for the quail: the Lark sets the morning watch and the evening, the nightingale: the Barges, like bowers, keep the streams of the sweet rivers, and the mackerel with the shad are taken prisoners with the sea: the tall young oak is cut down for the maypole: the scythe and the sickle are the movers furniture, and the fair weather makes the labourer merry:.. It is the month wherein Nature hath her fill of mirth, and the senses are filled with delights. I conclude, it is from the Heavens a grace, and to Earth a gladness.”

It might be expected that only those in the countryside would celebrate, but John Stow, writing in 1598, noted how citizens of London celebrated Mayday: “in the morning, every man, except impediment, would walk into the sweet meadows and green woods, there to rejoice their spirits with the beauty and savour of sweet flowers, and with the harmony of birds”. In years gone by he noted that parishes would join together to “have their several mayings, and did fetch in May-poles, with divers warlike shows, with good archers, morris dancers, and other devices, for pastime all the day long; and toward the evening they had stage plays, and bonfires in the streets“.

Both these writers approve of Mayday events, but in 1583 the puritan Phillip Stubbes wrote a stinging critique of the whole business in The Anatomy of Abuses: 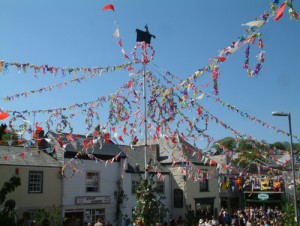 Against May, Whitsunday, or other time, all the young men and maids, old men and wives, run gadding over night to the woods, groves, hills and mountains, where they spend all the night in pleasant pastimes; and in the morning they return, bringing with them birch and branches of trees, to deck their assemblies withal. And no marvel, for there is a great Lord present among them as superintendant over their pastimes and sports, namely Satan, prince of Hell. But the chiefest jewel they bring thence is their Maypole, which they bring home with great veneration as thus. They have twenty or forty yoke of oxen, every one having a sweet nosegay of flowers placed on the tip of his horns, and these oxen draw home this maypole (this stinking idol rather) which is covered all over with flowers and herbs, bound round about with strings from top to bottom and sometime painted with variable colours, with two or three hundred men, women and children following it with great devotion. And thus being reared up with handkerchiefs and flags hovering on the top, they strew the ground round about, bind green boughs about it, set up summer halls, bowers and arbours hard by it; And they fall to dance about it like as the heathen people did at the dedication of the idols whereof this is a perfect pattern, or rather the thing itself.

I have heard it credibly reported (and that viva voce) by men of great gravity and reputation, that of forty, three score or a hundred maids going to the wood over night, there have scarcely the third part of them returned home again undefiled. These be the fruits which these cursed pastimes bring forth.

I wonder how Shakespeare’s audiences for A Midsummer Night’s Dream reacted to Lysander’s suggestion to meet Hermia in the wood,
a league without the town,
Where I did meet thee once with Helena,
To do observance to a morn of May,
There will I stay for thee.

There is more about Mayday rituals in this blog, and here Karin Brown of the Shakespeare Institute Library writes in particular about the tradition of the hobby horse, mentioned by Shakespeare. 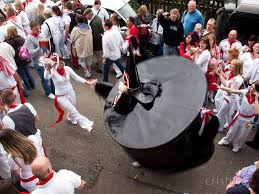 The hobby horse still features in morris dancing, where it sometimes captures young women under its skirt, but for a full-blooded celebration of Mayday you can’t beat the Cornish town of Padstow. Around 30,000 people now cram the narrow streets of the little town to watch not one, but two grotesque ‘Obby ‘Osses dance in a ceremony that lasts all day. It’s definitely related to morris dancing, but wilder and more unpredictable, and it does make you wonder if this is indeed a fertility ritual that goes back to pagan times. If Mayday was anything like this it would have been easy to see why Philip Stubbes believed it was presided over by Satan. This site includes lots of information, and the following video is a report by the Cornwall Channel of the 2013 celebrations. (Those receiving this by email need to go to the main Shakespeare blog website to watch it)

6 Responses to Love, whose month is ever May