Music and musicians at the RSC 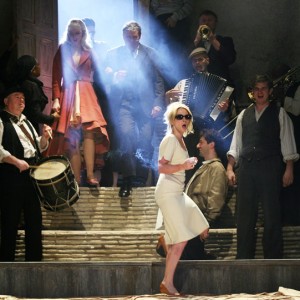 Musicians onstage for the RSC’s 2012 Taming of the Shrew

According to the Royal Shakespeare Company’s website, Shakespeare made over 2,000 references to music, included over 400 separate musical terms, and wrote around 100 songs to be performed in his plays. Music has been an essential component of performances at the Stratford theatres for generations, with original music being written for the plays since at least the early years of the twentieth century. However during the early 1960s, music took an important part in helping the RSC to define the company’s identity.

At the end of April 2015 the RSC’s Michael Tubbs died after a short illness. You might never have heard of him, even if you’ve attended productions for years. But Michael, described as “A true RSC man” in his obituary in the Stratford Herald, was one of a kind.  He joined the RSC in 1967 as deputy music director and in time became Director of Music a role which he made his own in a forty-year career. 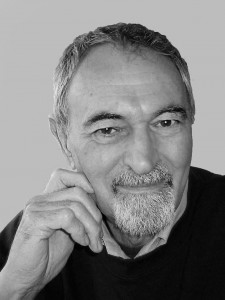 Maybe it was because the RSC’s musicians were for the most part completely hidden from view in their band box tucked away above and behind the RST stage, but opportunities for musicians to appear on stage were enthusiastically grasped, and Michael would be there. I particularly remember him appearing in the ill-fated 1984 production of The Merchant of Venice. Two massive pipe-organs were situated upstage at which two musicians in costume (Michael Tubbs and Roger Hellyer) sat and played. My memory might be playing me false, but I remember the organs moved downstage while being played, adding to the somewhat surreal nature of the production. In 1983 and 1985 the company put on The Dillen, in which the cast and audience left The Other Place to promenade around the streets and waste land nearby. The band, led by Michael Tubbs, I think banging a drum, headed this parade: when we all arrived at a makeshift outdoor stage on waste ground he conducted the actors and musicians in a spirited music-hall sequence. After the interval came scenes of World War One and the playing of Abide With Me as we solemnly processed back to the theatre. It was a great illustration of how music can set and change mood.

Michael’s enthusiasm for bringing music into the complete theatrical experience must have contributed greatly to the prominence of music in RSC productions. During shows he was a performer and conductor, but Greg Doran and Bruce O’Neil comment in their tribute to him that he “had an encyclopaedic practical knowledge of instruments and was capable of reheading a drum, programming synthesisers, tuning a harpsichord and cutting piano rolls by hand. If the instrument needed for a production did not exist, then he would make it himself”. Although no longer formally attached to the RSC, he remained in touch. Just a few days before his death, and in a wheelchair, he attended the concert of RSC music held at the RST on the Birthday weekend.

We in the RSC archives most often met Michael when he was organising concerts and evens. With his customary charm, Michael would appear, holding in his head a long list of exactly which pieces of music he wanted to borrow back. Quite some time later they would reappear out of the back of his car along with the next large batch of theatre scores and parts.

Many of those scores were written by composer Guy Woolfenden, Head of Music for the RSC from 1963 to 1998 and founder of Ariel Music. He wrote over 150 scores for the company, composing music for all of Shakespeare’s plays, several more than once. Some have been adapted for concert performance and some are well-known in their own right, for instance Songs of Ariel, written for The Tempest in 1978, sung and recorded by the unforgettable Ian Charleson. To celebrate Guy’s work, Birmingham Symphonic Winds are going to be performing 14 of his pieces for wind band at the Swan Theatre on Sunday 24 May. With Guy being diagnosed with dementia about a year ago the concert, which he will be attending, will be in aid of the Alzheimer’s Society. There’s more about the concert, including a list of pieces to be played, on this page.

It’s not going to be just a local celebration, as bands across the world have been invited to perform a work by Guy Woolfenden. Information about the project and a profile can be found on the World-Wide-Woolfenden website. It’ll be a fitting tribute to a man who wrote what Trevor Nunn, former artistic Director of the RSC has described as “wonderfully-original, galvanising and haunting melodies that audiences yearned to hear again”.

In recent years Music Operations Manager Richard Sandland has taken on the job of organising the RSC’s music. He has recently written about Guy Woolfenden in his excellent Musical Notes blog that explores the richness of the RSC’s music archives and the composers who have worked at the Stratford theatres. Guy Woolfenden and Michael Tubbs together defined the RSC’s music over many decades, and the concert on the 24th will be a fitting way of celebrating their achievement.

2 Responses to Music and musicians at the RSC