Peter Brook at the V&A 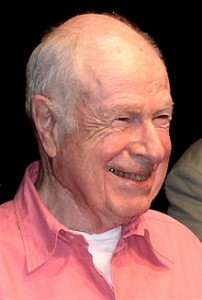 On Saturday I was lucky to be able to attend a symposium at the Victoria and Albert Museum entitled Peter Brook: Place, Process, Performance, Politics. It was part of the Museum’s Performance Festival and this investigation of Brook’s impact on British and International culture, as well as his working practices, is related to the V&A’s acquisition of Brook’s personal archives which will become available at the end of 2015.

Now aged 90, Brook’s career in the professional theatre goes back almost 70 years, and I’ve previously written about his work.  His inspirational ideas were recognised early when, at 21, he was invited to Stratford by Barry Jackson. The Shakespeare Memorial Theatre was coming out of the war years with a desperate need to reinvent itself. In 1946 he had the advantage of being little-known, and was given an unfamiliar play, Love’s Labour’s Lost, to direct, the set and costumes inspired by the paintings of Watteau. In 1947 Brook took on the much-loved tragedy of Romeo and Juliet boldly stripping the play back to its essentials, playing it on a set minimal for its time. Audiences and critics were outraged the cutting of the final reconciliation of the warring families after Juliet’s death.

Back in the 1940s one newspaper described Brook as “a teddy-bear filled with dynamite”. In Sally Beauman’s book Royal Shakespeare Company, actor John Harrison recalled Brook was “somewhat dictatorial in his methods… He was very high handed with us all in the ball and fight scenes, masterminding us through a megaphone”.

These early productions came well over 20 years before the one by which he will always be known, the 1970 A Midsummer Night’s Dream. During the 1960s Brook developed his ideas and in 1968 published his book The Empty Space. It’s opening statement was  ‘I can take any empty space and call it a bare stage. A man walks across this empty space whilst someone else is watching him, and this is all that is needed for an act of theatre to be engaged.’ 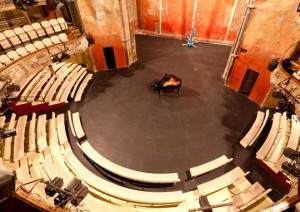 On Saturday the comment was made that Brook has spent the last forty years disproving his idea that theatre can take place anywhere. The day began with talks by architect Andrew Todd and designer Tom Piper. Todd specialises in performance space, and is based in Paris where Brook runs the Bouffes du Nord, a theatre that was in imminent danger of demolition when he took it over. Brook found that he needed “a shell around the empty space”, and this theatre offered “intimacy and concentration”. His work has also been performed in a variety of re-used spaces such as quarries, industrial buildings and even a tram depot in Frankfurt. Andrew Todd suggested that architects have to resist the temptation to tell the whole story: a theatre building has to be left incomplete.

Tom Piper worked at the Bouffes du Nord at the beginning of his career as a designer. He recalled how Sally Jacobs, who had designed Brook’s A Midsummer Night’s Dream, had explained how some of the actors had created their own props in rehearsal. Their improvisation was how Bottom’s ass’s head with its ping pong ball nose, and his hooves made of blocks of wood, were invented. The literalness of these props was appropriate since the mechanicals don’t trust imagination, wanting to bring real moonshine into the chamber. This production in particular could only work if the audience used its imagination. The key lines were these:
And as imagination bodies forth
The forms of things unknown, the poet’s pen
Turns them to shapes and gives to airy nothing
A local habitation and a name.
Such tricks hath strong imagination.

On 3 May The Reunion on Radio 4 featured Peter Brook’s A Midsummer Night’s Dream. It will be repeated on Friday 9 May and is also available to play again.

The tone of the afternoon, led by Kathryn Hunter who has worked many times with Brook, was more reverential. She recalled her feelings of doubt and fear when she joined the rest of the company at the Bouffes du Nord for her first rehearsal. Rehearsals always begin with “the circle, the stillness and the silence”: the work is always about connection, about being together, and “above all about joy”.

Brook himself spoke for twenty minutes, with a focus on how his theatre work relates to politics. In 1966 he directed Denis Cannan’s anti-Vietnam play US with the RSC at the Aldwych, and in 1968 came the film Tell Me Lies, based on the play with many of the same actors. Though of its time, the film’s subject of the West being involved in international conflict is also very topical, and during one of the televised debates in the 2015 election campaign party leaders were directly accused of lying. But the film’s title shares that ambiguity so noted by Brook: politicians have to be able to tell lies, but the title is also a plea to politicians: we need to be told convincing lies to cushion us from terrifying realities.  The day finished with a showing of the film which is also on YouTube. If you receive this post by email you will need to access the blog itself to get this link.

At sixteen, he told us, he had been attracted to the purity of Marxism, but was disillusioned when communist rulers succumbed to the same temptations as other politicians. He was attracted to theatre, in which one is always led to sympathise – to see a situation from one point of view and then another. Political theatre takes a situation and opens up its contradictions and ambiguities, putting the audience into an uncomfortable position, each person having to find their own attitude. With this definition, Shakespeare is most definitely a political writer: “Contradiction can make us blind or open our eyes”.