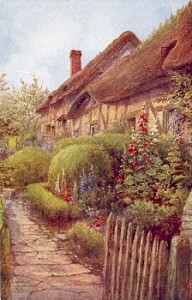 In any collection of old postcards of Stratford you are likely to come across the work of the artist William Wells Quatremain (usually referred to as W W Quatremain). Although he was not the only artist painting scenes of the town in the early 1900s his became famous because he was employed by the postcard company Salmons to produce views of Warwickshire. His relationship with Salmons began in 1907 and lasted until his death in 1930 by which time countless thousands of his romantic pictures had sent a vision of the town to countries around the world. Many people must have got their first impression of what Stratford and its landmarks were like from his paintings.

Ursula Bloom’s book Rosemary for Stratford-on-Avon is a portrait of the town between 1900 and 1910, published many years later in 1966. It’s an affectionate tribute to the “old-world small town, surrounded by green fields. A little town of little people” before commercial exploitation and population growth “wiped away the old-fashioned sweetness of memory”. She lived near the town as a child when her father was the parson of a nearby village. As Ursula Bloom did in words, W W Quatremain painted a sentimental picture of the town and its Shakespeare relics, and it’s not surprising that she opens her book with an atmospheric, fictional description of him getting ready to attend evensong on a Sunday evening in spring. 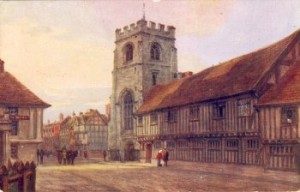 The feet pattered past Mr Quatremain’s window which was at street level. Naturally everybody went to church; it was imperative, a duty none broke, and to keep away would have been frowned on…. He peered out of the parlour window. In the next room his water-colour landscapes were on show, for he painted charmingly….All along the street eyes were prying from behind madras muslin curtains, hoping to see, but not be seen….Mr Quatremain changed into his best jacket, the dark velvet one which was the symbol of his art. He stepped out into the street, instantly joining with others who were all bustling along towards the church. Hazy heliotrope smoke trailed deliciously around Elizabethan chimney pots, as it had done for generations.

Quatremain came to live in Stratford at the age of 10, his mother moving to the town to be closer to relatives after the death of William’s father. He came to love the town, never moving away, and painting its buildings many times. Anne Hathaway’s Cottage, with its thatched cottage, beautiful garden and romantic associations, was a particular favourite. Another regular subject was the even more picturesque nearby town of Warwick. Hundreds of his views were reproduced as postcards. At a time when more and more postcards were based on photographs it’s perhaps surprising that Quatremain’s beautiful but old-fashioned paintings retained their popularity, but even now the paintings and the cards are still collected. Many of the buildings and views he painted are little changed. This site includes images of many of them and some are available to purchase. 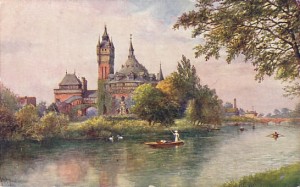 Shakespeare Memorial Theatre by the Avon

This site includes more details about Quatremain’s life, including the information that at one time he painted stage scenery for Frank Benson. At the same time as painting views for postcards, original paintings could be purchased in Stratford and he was very much the local artist. Locals commissioned him to produce work: I have a painting of the little house along the Warwick Road in which my grandmother was brought up, which he painted for her around the time of her marriage.

If in Stratford, and you would like to see some originals, the Shakespeare Centre Library and Archive now holds the cards collected by the late Trevor Cleaver, amounting to 430 different issues. And Patricia McFarland has published a small book on the subject, Mr Quatremain’s Stratford.  The following is a gallery of some of his postcards. 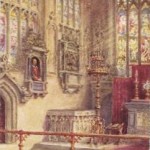 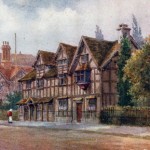 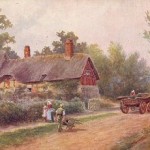 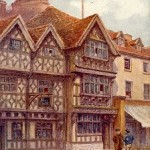 The Garrick Inn and Harvard House 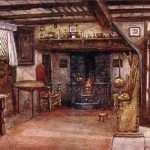 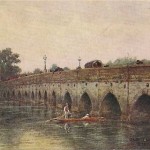 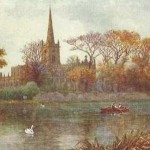 Holy Trinity Church from across the Avon 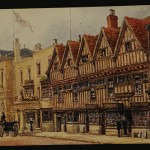 The Town Hall and Shakespeare Hotel 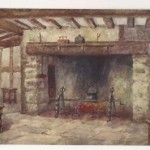