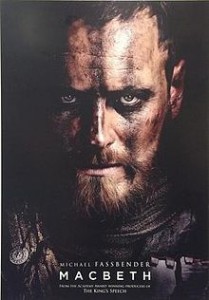 It doesn’t often happen that a Shakespeare film is dubbed “The “Most Anticipated Film” of the year, but this is how the adaptation of Macbeth directed by Justin Kurzel and starring Michael Fassbender and Marion Cotillard has been described. The film was previewed at the Cannes Film Festival a few weeks ago in May 2015 and since then the internet has been buzzing with articles, most of which have also received many comments and shares.  The film is scheduled for release in the UK on 2 October. No date has been finalised for release in the USA, but it is likely to be some time in the fall.

The Australian director is best known for his first feature film, Snowtown, based on the true story of the Snowtown murders. Michael Fassbender has had a varied career in films from action movies to an adaptation of Jane Eyre and the award-winning historical drama 12 Years a Slave, and Marion Cotillard has a distinguished reputation in both French and American films. Macbeth is one of Shakespeare’s most famous plays and this film, although heavily cut (all the humour has been removed), does follow the plot of the play and uses Shakespeare’s words. Fassbender’s name alone is likely to guarantee a hit, but it isn’t just the cast or the reputation of the play that has got people excited. 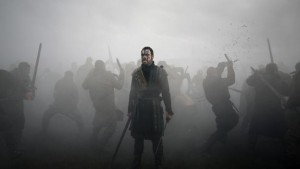 The film is variously described as a “grim and bloody adaptation”, a “jaw-dropping vision” and “a hell of a film”, set in “a blasted netherworld of feral violence.” Here’s an extract from the BBC’s preview: “Obliterating any trace of stage-bound stuffiness, he replaces it with the mud and gore of an anti-war movie and the stylised immediacy of a graphic novel: the slow-motion blood-spurting recalls a previous Fassbender film, 300, except with jagged wounds in place of washboard stomachs. Kurzel does whatever he can do make every scene more nightmarish, whether that means including a procession of zombies (you read that correctly), or giving an inspired, apocalyptic twist to the Birnam Wood prophecy. At times, it seems as if he has shifted the action to a forbidding alien planet: Duncan and the royal court favour Jedi-like dressing gowns, while the witches’ cosmetic facial scarring makes them appear half-Klingon.”

In case you’re groaning at this description, you might like to note that several eminent Shakespeare academics have come out in the film’s favour, based on a viewing of the trailer. The Washington Post includes interviews with Stephen Greenblatt and James Shapiro. Greenblatt said: “The trailer seems in touch with several features that make the play attractive to contemporary audiences: lots of blood and gory battle scenes; a strong, erotically charged relationship at its center; an intense interest in the costs of masculinity; a way of imagining the link between sex and violence.” 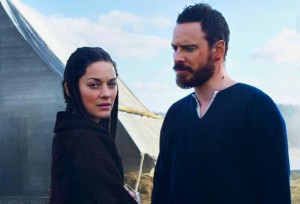 And Shapiro commented: “The play is full of special effects, and theater directors have to struggle to convey the spectral presence of daggers, the ghostly presence of the slain Banquo, and the play’s sheer murkiness. These are a lot easier to convey in a film…The trailer — which hints at a battle scene that’s a cross between ‘Braveheart’ and ‘Game of Thrones’ — makes use of technology that was simply unavailable to Shakespeare. If he had it, he would have used it.”

If you’d like to take a look at a range of stills from the film, this article from Mail Online contains lots of images.

Macbeth has been adapted for film many times, memorably by Orson Welles in 1948 and Roman Polanski in 1971. Polanski’s film, reviewed here when it was released on Blu-ray in 2014, was also more violent and bloody than many viewers expected, but expectations have changed. This new film is clearly drawing comparisons with the realities of modern warfare: Scottish castles are replaced with tented encampments, for instance, and the Daily Mail article referred to above describes Fassbender’s Macbeth as a “traumatized war-hero”.

Mike D’Angelo’s review notes that no film adaptation alters the meaning of Shakespeare’s play, and suggests “Macbeth has been adapted for the screen a number of times since 1971, but not memorably; we’re long overdue for a contemporary version by a major director.” By the end of October we’ll know if this is it.

One Response to Anticipating Macbeth on film