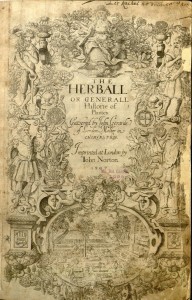 The title page of Gerarde’s Herball, 1597

Last week the second of Mark Griffiths’ pieces about Gerarde’s Herball and its connections with Shakespeare was published in Country Life, and I’m grateful to friends for lending me copies of both. They’ve made interesting reading: Griffiths is  extremely knowledgeable about the history of plants and their allegorical significance, and his analysis of the Gerarde 1597 title page is worth reading whether or not it has anything to do with Shakespeare.

The second essay, entitled “A Country Controversy” harks back to May 1591 when Sir William Cecil, Lord Burghley, entertained the Queen and her court at his house in Hertfordshire, Theobalds. The event went on for 10 days and cost him a fortune. It was successful, however, in reasserting Cecil as the Queen’s chief minister and launching his son Robert’s political career. During the event a short allegorical dialogue was staged between “The Gardener” and “The Molecatcher”, in which the Queen is asked to adjudicate between them over a jewel box which has been dug up in Robert’s garden. The Gardener has created order in the garden, “to do all things that may bring pleasure and profit”, and the Molecatcher  acts as policeman: “Good clerks told me that moles in fields were like ill subjects in commonwealths” says the Molecatcher.

This quaint device, hardly a play, is anonymous, so has Griffiths uncovered any evidence that it’s by Shakespeare? Sadly it’s all internal evidence: the metaphor of the country as a garden, often used by Shakespeare, the use of some legal language, and some words used by him. I’d feel happier if Griffiths’ tone was less confident: “Its star turn, however, would never be matched again. He was not a guest, but a hired hand, a 27-year-old actor and writer in the throes of the most important career launch in theatrical history”.  Accepting this as an early work by Shakespeare depends entirely on the first essay’s success in connecting Shakespeare, Gerarde and Burghley. 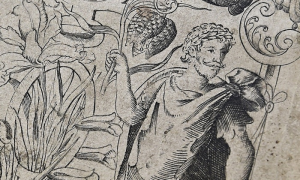 Detail from the 1597 title page of Gerarde’s Herball

I’ve very much enjoyed reading the first piece: beautifully-illustrated, the essay is 17 pages long and concentrates on decoding the title page of the 1597/8 first edition of Gerarde’s Herball. In so doing, he uncovers details which he says haven’t been noticed before. The oval panel at the bottom of the page represents Burghley’s garden at Theobalds, and the couple walking in it are the Queen and Gerarde. The identification is confirmed by the Tudor rose, the eglantine (associated with Elizabeth), and an olive tree (associated with Burghley). At least some of the men of the page are both figures from the bible or classical antiquity as well as contemporaries, so the figure at top left is both Adam, the first gardener, and Gerarde himself. Below him stands the figure of Solomon, or Burghley, to whom the volume is dedicated. The plants held by the men are significant, but this is where the identification of the mystery man in the bottom right becomes strained. One of his plants is sweetcorn or maize which has no particular link with Shakespeare. The cipher on the plinth on which the man stands could only read “Shakespeare” if the person reading it knew that the Shakespeare coat of arms, only granted a year before, had a golden ground (OR).

Following  Griffiths’ own suggestions, the page can be read as a compliment to the Queen, Burghley and Gerarde. What would Shakespeare, a young man in a profession that was barely respectable, and almost unknown, be doing in such distinguished company?

Griffiths speculates about Shakespeare’s role: “Shakespeare began working for Burghley and Gerard started supplying him with information about plants and horticulture…[Gerard] wished to include scores of quotations from Latin and Greek poetry in The Herball accompanied by verse translations..Working closely with him, Shakespeare moulded the results into verse piecemeal between 1591 and 1597”. Appealing though this is, there is no evidence of this relationship.

Gerarde himself actually contradicts it: in “to the courteous and well-willing readers”,  he writes: “Faults I confesse have escaped, some by the Printers oversight, some through defects in my selfe to perform so great a work, and some by means of the greatnesse of the Labour, and that I was constrained to seeke after my living, being void of friends to beare some part of the burthen.” In other words, he didn’t have any assistants, so there was no reason to put Shakespeare on the title page.

As I write, academics are examining the page afresh and entering in the discussions. To me, the young man bearing newly-discovered or recently-imported plants seems to symbolise the world of exploration. He looks out of the page not because, as Griffiths suggests, he’s an actor, but because he’s looking to the future, and the discoveries the reader will find when the turns the pages of the book. And it would be appropriate for the printer, John Norton, who must have undertaken a huge amount of work to create this massive book, to be acknowledged on the plinth.

Mark Griffiths’ book on Burghley, Gerarde and Shakespeare will be published in 2016, and he is also working with Edward Wilson from Worcester College Oxford on an edition of the Theobalds entertainment and the verse translations in the Herball.

There is some lovely stuff on early herbals here.

Here’s another suggestion for the meaning of the cipher

The TLS blog has hundreds of comments on the controversy.