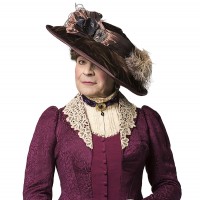 Next week a production of Oscar Wilde’s most famous play, The Importance of Being Earnest, opens in the West End of London. The production stars one of best-loved actors, David Suchet, in the leading role of Lady Bracknell. A few days ago I caught the production at the last stop on its tour, the Theatre Royal in Bath.

The theatre is an ideal venue for this brightly-polished, very funny play. The three-act structure fits perfectly, the velvet curtains rising to reveal to the audience the elegant sets designed by Peter McKintosh. Wilde wrote the play for just such a stage and it was normal for the leading actors to “get a round” from the audience on their first appearance. There’s a nod to this theatrical tradition when Suchet sweeps in for his first entrance through a pair of double doors upstage centre, above a short flight of steps. Particularly for those used to seeing him on TV as Hercules Poirot, his transformation alone merits the round of applause with which he is greeted.

Suchet already had a thriving career before Poirot, and he has continued to act in other roles throughout the twenty or so years in which he has played Agatha Christie’s Belgian detective. I first saw Suchet playing the small but striking role of Pompey in Peter Brook’s 1978 Antony and Cleopatra, and remember being impressed by him even then. I next saw him at the Aldwych in 1979 playing a range of lighter roles: Sir Nathaniel the curate in Love’s Labour’s Lost, Petruchio’s servant Grumio in The Taming of the Shrew and Glogauer in Once in a Lifetime. Later roles in Stratford included Bolingbroke in Richard II in 1980, Shylock in The Merchant of Venice in 1981, and Iago in Othello in 1985. His Bolingbroke in Richard II was a man shaken by the prospect of banishment:
O, who can hold a fire in his hand
By thinking on the frosty Caucasus?
Or cloy the hungry edge of appetite
By bare imagination of a feast?
Or wallow naked in December snow
By thinking on fantastic summer’s heat? 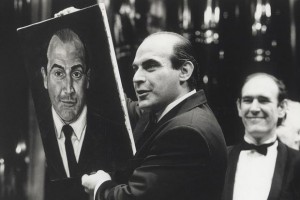 He also memorably played Timon in a modern dress production directed by Trevor Nunn at the Young Vic. No wonder that, as he recounted in Poirot and Me, his reaction to being offered the role was not positive: “I was astounded. Me, the serious Shakespearean actor, portrayer of men with haunted souls, playing a fastidious, balding detective?”

Watching him playing Lady Bracknell it occurred to me: surely I’d seen David Suchet playing a woman before? In the prologue to The Taming of the Shrew did he not play the unfortunate servant who has to dress up as Sly’s wife? The part is often played by a slim young man but in this case Suchet was a well-built “wife” who came near to punching Jonathan Pryce’s Sly when he became too amorous.

The comedy then depended on the fact that Suchet was such an unlikely woman, and his Lady Bracknell is not a female impersonation in the Mrs Doubtfire mould. It’s a lovely performance that picks up the social demarcations within the play. One of her most famous lines is “Never speak disrespectfully of society, Algernon – only people who can’t get into it do that”. Her admission that she married money rather than inheriting any of her own is the mistake of an unguarded moment, and Suchet stifles a laugh at the idea of Jack being found in a handbag, but is outraged by his being left in a public cloakroom.

The play’s a frothy confection, as full of famous quotations as one of Shakespeare’s plays, like Gwendolen’s “I never travel without my diary. One should always have something sensational to read in the train”. The young foursome are a sparky group, though Imogen Doel’s eccentric Cecily often steals the scene.

As a Shakespeare-obsessive I couldn’t help noticing moments that might have been inspired by Shakespeare. The quartet of lovers reminded me of A Midsummer Night’s Dream, in particular when Gwendolen and Cecily swear affection to each other one moment and hate each other the next. Then there are the mistaken identities, the two boys discovered to be brothers after several unlikely coincidences. I was struck by the scene in which the learned Miss Prism (Michele Dotrice) and Canon Chasuble (Richard O’Callaghan) talk in the garden rather as Holofernes the schoolteacher and Sir Nathaniel the Curate do in Love’s Labour’s Lost. 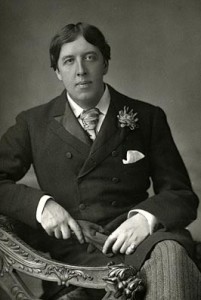 Wilde wrote about Shakespeare’s work in The Critic as Artist and in his essay The Portrait of Mr W H. The play was hotly anticipated and its first performance in 1895 did not disappoint, but not long afterwards Wilde was convicted of homosexuality. The play was never performed again in his lifetime. It has since become one of the most-quoted of English plays owing to Wilde’s brilliant writing and the creation of Lady Bracknell, one of the best-loved roles for actors of both sexes, rather, again, like Shakespeare’s.

This entry was posted in Legacy and tagged David Suchet, Oscar Wilde, Richard II, The Importance of Being Earnest, Theatre Royal Bath. Bookmark the permalink.