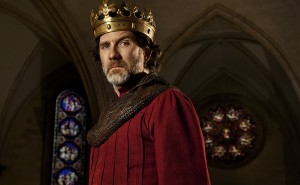 This weekend the Globe’s production of King John (co-produced with Royal & Derngate, Northampton, directed by James Dacre), closes. It’s the very last play in the canon to be produced by the Globe (though it has been staged there).  This article suggests “There’s a reason why the past four centuries have ignored King John”.

But is that fair? In this article Michael Billington asks “What’s your favourite King John?, and although he didn’t get many responses the play clearly does have its fans. It was recently enthusiastically reviewed in the Financial Times and the Independent and in this blog by Michael Gray. 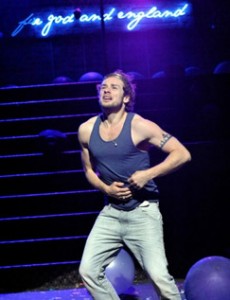 Nothing is known about the reaction to the play in Shakespeare’s day, But Marc Morris’s article in History Today (based on his new book King John: Treachery, Tyranny and the Road to Magna Carta) notes that Shakespeare’s initially sympathetic treatment of John might have owed something to Thomas Cromwell’s attempt during the reign of Henry VIII to transform John’s reputation : “John was an English king who had stood up to the pope”. Around 1536 “John Bale penned a play called Kynge Johan and thereafter performed it around the country… The first play to present an English king on stage, …the righteous King John defends England against the machinations of the pope and the king of France.” The Kynge Johan “travesty” did not replace John’s reputation as a bad king, and after the first few scenes Shakespeare’s king shows himself to be an out and out villain.

This play became popular around two hundred years ago. J P Kemble’s production coincided with the wars with France: this week is the bicentenary of the battle of Waterloo at which Napoleon was defeated. In his production Constance, the grieving mother of Prince Arthur was played by the leading tragic actress of the day, Sarah Siddons. The introduction in the RSC Edition of the plays notes that in 1811 Jane Austen surprisingly complained in a letter that the performance of King John which she had hoped to see was replaced by Hamlet. 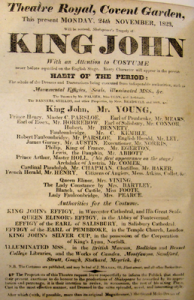 In 1823 Charles Kemble planned a production of the play in collaboration with antiquary James Planche who designed historically accurate costumes and sets. In his Recollections and Reflections Planche wrote “When the curtain rose, and discovered King John dressed as his effigy appears in Worcester Cathedral, surrounded by his barons sheathed in mail, with cylindrical helmets and correct armorial shields, and his couriers in the long tunics and mantles of the thirteenth century, there was a roar of approbation, accompanied by four distinct rounds of applause, so general and so hearty, that the actors were astonished.” Thus began the fashion for splendidly ornate productions that could become a series of magnificent tableaux rather than dramas. These included those by Macready in 1842, Kean in 1852 and Herbert Beerbohm Tree in 1899, after which the play declined in popularity. There’s a full performance history here.

There’s been a distinct increase in the play’s popularity over the last 20 years or so. It’s strong on the observation of politicians and others in power, and through the character of The Bastard it pokes fun at the pretensions of those who govern us. And the Bastard is honest enough to admit that he is as corruptible as anyone else. His famous speech is about “commodity”, what we would call self-interest or greed.
And why rail I on this Commodity?
But for because he hath not woo’d me yet:
Not that I have the power to clutch my hand,
When his fair angels would salute my palm;
But for my hand, as unattempted yet,
Like a poor beggar, raileth on the rich.
Well, whiles I am a beggar, I will rail
And say there is no sin but to be rich;
And being rich, my virtue then shall be
To say there is no vice but beggary. 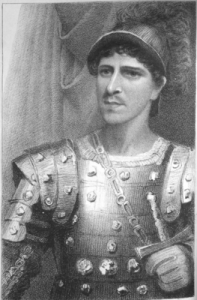 Charles Kemble as the Bastard, 1804

The Bastard has often been played by the leading actor. Completely invented by Shakespeare, he speaks directly to the audience, and appears to be a straight-talker in a world of political deception. He also speaks the final, patriotic lines of the play:
This England never did, nor never shall,
Lie at the proud foot of a conqueror,
But when it first did help to wound itself.
Now these her princes are come home again,
Come the three corners of the world in arms,
And we shall shock them.
Nought shall make us rue,
If England to itself do rest but true.

In the Globe’s production the Bastard has been played by Alex Waldmann,  the King in the RSC 2012 production, while the King is played by Jo Stone-Fewings, the Bastard in another RSC production back in 2002. How interesting it would be to hear their views on performing these two contrasting but complementary roles.

One Response to Is King John Shakespeare’s most unloved play?