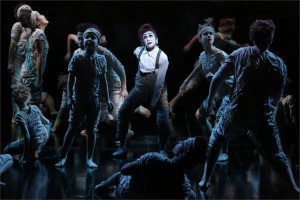 Julie Taymor’s film of A Midsummer Night’s Dream was released in the UK, perhaps predictably, on Sunday 21 June 2015. And from the trailer, it looks amazing (see the end of this post). As a director she’s worked around the world on film, stage productions of opera, straight plays and of course the musical The Lion King.

Much of her work demonstrates her interest in the mythology and folklore of different cultures, probably owing to the fact that she spent much time in the far east when young, learning about mime and puppetry. She’s noted for her love of spectacular visual effects. 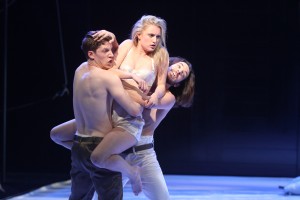 She’s also got a great love of Shakespeare and has directed several of his plays on stage. Her previous Shakespeare films, Titus and The Tempest, started, as did A Midsummer Night’s Dream, with stage productions. Both those, though, were made on location, whereas this one is based on the New York production by Theatre for a New Audience from 2013, and firmly rooted in the theatre. The audience are clearly visible in at least some of the shots. It’s not just a filmed version of the stage show though. In Broadway World she describes is as “a new hybrid of film and theater where the best of both worlds has the opportunity to join forces and create a unique new form of entertainment”

We’re only just getting used to live streaming of plays from theatres into cinemas, and there are still those who don’t like the practise. There are worries that it will harm audience figures and reduce the number of productions being put on. And there are ongoing discussions about how it could change stage productions. How might the knowledge that the production was to be made available as a live relay and ultimately for sale on DVD affect the director, the designer and even the initial casting of the roles?

I imagine Taymor planned to make the film from the start, and used all her knowledge to create a film far more spectacular than the stage production can have been for the audience. In this interview she explains “if you just film a [theatre performance], you don’t get to put the camera on stage or use a handheld camera for close-ups of speeches, which I’ve done here … My big belief about Shakespeare on film is that, if you can show close-ups of mouths moving and reaction shots of other actors in the scene, you have double the understanding.”

It’s obviously much more sophisticated than the versions of productions filmed for TV in the 1970s and 1980s, like Trevor Nunn’s The Comedy of Errors where moments that had been subtle onstage were embarrassingly clumsy on film. 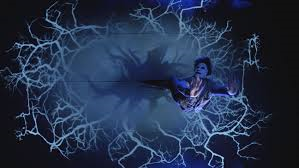 She describes her method and what she hopes to achieve in What’s on Stage: “I had 16 camera positions over four performances. I got those cameras in the best seats in the house for every moment. It took me a month to go through all the material just to select the best shots, but I feel it was worth it, because film is forever, while our initial production only ran for 12 weeks.”

“I much prefer productions on film that have been edited this way… When you edit it live there’s only so much preparation you can do – plus you don’t have camera movement, you don’t have cameras on stage. With this approach there’s a closeness to the actors that brings a liveness. You still get a connection with the audience – after all, the actors are still projecting to the live audience. So it’s not false in that sense. But there’s a wonderful level of intimacy to it”. 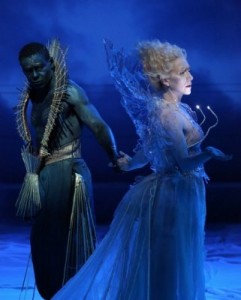 She’s certainly chosen the right play to try this out. Broadway World, again, calls the play “phantasmagorical”, and Taymor’s film “visually breathtaking, funny, sexy and darkly poetic”.  You can also hear Taymor on BBC Radio 4’s Front Row, broadcast on 19 June. In the interview she talks about some of the ideas and motifs behind her visual inspiration for the film, and about her interest in work that transcends culture. I was pleased to hear her saying she wanted  to help the understanding Shakespeare’s words. For me the proof of the pudding will be whether the speaking of Shakespeare’s words are overwhelmed by the glorious special effects and music. The words are, after all, rather good.

The film is to be shown at the Picturehouse in Stratford at 1.30 on Sunday 28 June, and at other cinemas at different times on the same day.  The trailer is below: if you receive posts by email click on the link at the end of the message to go to the blog to play the video.

This entry was posted in Legacy, Plays and Poems, Shakespeare on Stage and tagged A Midsummer Night's Dream, Julie Taymor, Theatre for a New Audience. Bookmark the permalink.