All for your delight: Shakespearian summer treats 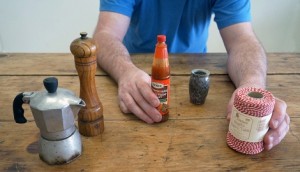 Now July has arrived, and some summer weather, it’s time for a round-up.

Already well under way is the Complete Works: Table Top Shakespeare project being run by  Forced Entertainment, a theatre company based in Sheffield, UK. Over 9 days at the Foreign Affairs Festival, Berlin, Forced Entertainment performers will retell Shakespeare’s complete canon, making their way through a series of 36 forty minute works played out on the one meter stage of a table top. This comical and intimately retold Shakespeare season presents the works as hand-made miniatures using a collection of everyday unextraordinary objects as stand-ins for characters. Each play will be live streamed, for free, on our website – inviting audiences around the world to tune in and watch from a distance each evening (GMT), starting June 25 through to July 4.  More information can be found here. 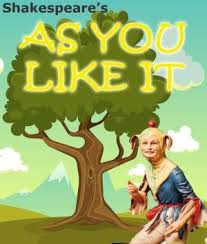 Also touring in the UK and indeed as far away as the Netherlands and Norway is the well-established Festival Players Theatre Company. They are celebrating thirty years of professional touring with a summer programme of As You Like It and Henry IV (a conflation of both parts), directed by Michael Dyer. They are performing at a  huge number of impressive venues that will see them going right through until September.

Shakespeare enthusiasts looking for summer reading might enjoy a new book that’s to be published by Publicious in paperbook and ebook on 4 August, My Stratford Friend by Dominick Reyntiens.

It’s the story of Shakespeare’s childhood told through his fictional friend Tom Wickham, a stable boy and son of a livery steward. It weaves known facts about Shakespeare with speculation such as the possibility he worked as a tutor in Lancashire in a “radical and entertaining interpretation of Shakespeare’s adolescence”. “The boys embark on a riotous and decadent, journey of self-discovery. At once My Stratford Friend presents a new side to Shakespeare the man and also reveals our shared need for enduring friendship, nostalgia, and good old-fashioned fun.” Dominic Reyntiens will be presenting the book at the Edinburgh Fringe Festival from 8 August. The author will be presenting a performance version at the Edinburgh Fringe Festival. 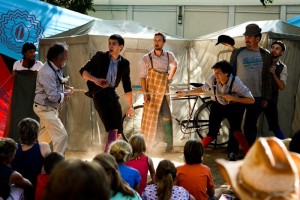 Also at the Fringe Festival in Edinburgh, as part of their UK tour, HandleBards are off again. Their tour began on 24 June.
They’re an eccentric cycling Shakespeare troupe, praised by Sir Ian McKellen as ‘outrageous’ and ‘uproariously funny’, and they’ve got something a little bit different to offer at this year’s Fringe. They’ll perform a limited run of secret shows (18, 19, 25, 26 August) in secret locations across Edinburgh. Meeting their audience at Bedlam Theatre, they’ll provide each and every one of them with a bicycle, and together actors and audience alike will pedal off on a spectacular adventure “over hill, over dale, thorough bush, thorough brier”. They’re also performing Hamlet (21, 23, 28, 30 August) and A Midsummer Night’s Dream (20, 22, 27, 29 August) in the Royal Botanic Garden Edinburgh, where last year they won the Edinburgh Fringe Sustainable Practice Award.

Over in the USA there is as usual a crop of outdoor Shakespeare. Just to draw attention to a small selection: the Baltimore Shakespeare Factory will be performing both As You Like It and an all-female production of Henry IV part 1. Performances take place outdoors at the Evergreen Museum and Library.
As You Like It begins performances on July 17, 2015. Chris Cotterman, who recently played Bassanio in BSF’s critically acclaimed production of The Merchant of Venice in original pronunciation, will direct. BSF continues to break ground with an all-female cast in Henry IV, Part I. Performances begin on July 31 and run until August 23. It will be directed by Founding Artistic Director, Tom Delise.

The Manhattan Shakespeare Project’s all-female production of The Taming of the Shrew, directed by Kate Holland is already under way, and playing from 9-26 July in Morningside Park, Manhattan. Performances are free and the running time is 75 minutes.  THE TAMING OF THE SHREW uses the company’s unique “reverse-theatre-in-the-round” staging and a surprise framing device. Fun and engaging for all audiences and pets alike, the all-female cast takes on the questions of gender voice, rights, and duty. And with a talk back after each performance everyone is part of the conversation.

In Chicago, First Folio Theatre is producing The Winter’s Tale as this year’s play in its outdoor Shakespeare Under the Stars series from 8 July to 19 August. The production will be “filled with wonder, magic and mystery”, and directed by First Folio theatre’s Artistic Director Alison C Vesely. This will be the 19th Annual production.

First Folio Theatre is concluding its 19th season of bringing high-quality performances of Shakespeare and other classics to the stage. During that time, the theater has expanded from an annual summer production to a year-round operation with three separate and distinct stages at the historic Mayslake Peabody Estate. The Chicago Tribune raved that their Shakespeare Under the Stars summer series “offers something Navy Pier can’t…plenty of greenery, gentle breezes and the chance to stretch out on a blanket with family and friends while being transported to Shakespeare’s otherworldly romance.”

Here’s hoping your summer will be full of Shakespeare treats.