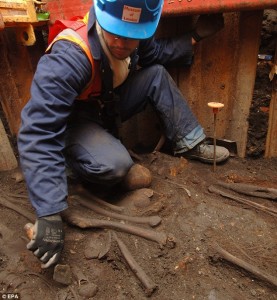 An archaeologist at work on the Bedlam graveyard

I always used to think of archaeologists as people who dug up the remains of Roman settlements and prehistoric burial chambers, but in the last few years they seem to have been examining a much wider range of sites, working with specialists from other disciplines to tell us much more about the relatively recent past. In so doing they are explaining not just the progress of invaders, or the rich and powerful, but about ordinary people.

I’ve been fascinated by the work done by Museum of London Archaeology to find the remains of the playhouses of Shakespeare’s London, and even evidence of the activities of the audiences. These have been outlined by Julian Bowsher in his book Shakespeare’s London Theatreland. At least partial remains of the Rose, the Globe, the Theatre, the Curtain and the Hope have all been found as well as bear-baiting rings. These provided entertainment of a different kind, though the fact that they existed in close proximity is a reminder of the options available to Elizabethans in exchange for their pennies. 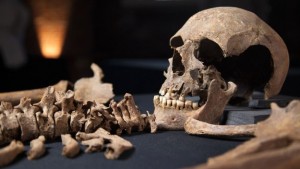 Now archaeologists from Museum of London Archaeology have been at work on a different sort of project that is revealing much more about the lives, illnesses and deaths of Londoners from 1569 onwards. At 8pm on Sunday 19 July Channel 4 will screen the documentary London’s Lost Graveyard: the Crossrail Discovery. The huge excavations for the Crossrail project has uncovered the Bethlem Burial Ground, thought to be lost forever, beneath Liverpool Street Station. The burial ground itself may have been known by Shakespeare: it seems likely that he visited Bedlam, the asylum for the mentally ill, as Edgar in King Lear describes how he will disguise himself:
My face I’ll grime with filth,
Blanket my loins, elf all my hair in knots,
And with presented nakedness outface
The winds and persecutions of the sky.
The country gives me proof and precedent
Of Bedlam beggars, who, with roaring voices,
Strike in their numb’d and mortified bare arms
Pins, wooden pricks, nails, sprigs of rosemary;
And with this horrible object, from low farms,
Poor pelting villages, sheepcotes, and mills,
Sometime with lunatic bans, sometime with prayers,
Enforce their charity.

This page contains a link to the trailer and here’s the account in the Daily Mail.

The burial ground’s main function was to bury plague victims. Plague nowadays makes us think of the medieval Black Death and the 1665 Great Plague in London, but there were sporadic outbreaks for centuries. There was one in Stratford-upon-Avon in the year Shakespeare was born, and in Romeo and Juliet it is an outbreak of plague that prevents Friar Laurence’s letter to Romeo getting through. Audiences would have recognised what happened:
The searchers of the town,
Suspecting that we both were in a house
Where the infectious pestilence did reign,
Seal’d up the doors and would not let us forth.

The 1665 Great Plague killed 75000, around a quarter of London’s population, and they have excavated a staggering 3000 of the 20000 skeletons thought to have been buried at Bethlem. It’s been described as “a vast poor man’s graveyard from the era when modern multi-cultural Britain was born”. Archaeologists have been working with microbiologists and palaeontologists to analyse the bones and test DNA, comparing results with the historical parish records to reveal the names and life stories of some of the victims. Matthew Symonds explained “Historical records will be from the more educated and better-off sections, but this is something that tells us how everyday people lived their lives.” Reassuringly for my preconceptions, the archaeologists have also found the remains of a Roman road. 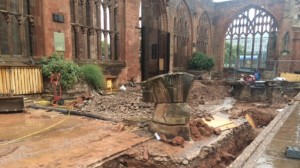 Also in the news this week has been the discovery of archaeological finds during restoration work at Coventry Cathedral. Stonework from a thirteenth century chapel has been found, and rubble dating from after the destruction of the Cathedral in 1940 when the whole city was subject to ferocious bombing. Masonry has been uncovered, and to quote the Coventry Observer, “For the first time in 75 years, the original stone floor of the medieval Cathedral – made up of memorial stones dating back to the 18th century – can be seen alongside the burnt wooden base of the Rood Screen which was destroyed in the fire following the 1940 bombing.”

Their Facebook page also contains additional information, and the excavation will remain open until 23 July.

Coventry was the nearest place of any size to Stratford and was an important city, enjoying a measure of self-government. We can’t be sure that Shakespeare ever visited Coventry himself but he was certainly aware of its history, as he refers several times to events that happened there. Act 1 Scene 3 of Richard II, the great formal scene where the court assembles to witness the fight to the death of Bolingbroke and Mowbray, is a dramatisation of a real event that took place in Coventry in 1398. Parliament met in Coventry on a number of occasions from the reign of Henry IV to Henry VI making the city the temporary seat of government, in particular during the Wars of the Roses. During Shakespeare’s lifetime Queen Elizabeth herself stayed in the city.

The discoveries being made by archaeologists are reminding people of Coventry’s distinguished past, as well as the no less interesting, lives of Londoners from Shakespeare’s period and beyond.