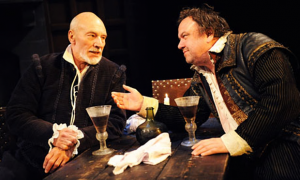 Stories that portray Shakespeare as a real person, particularly one who didn’t always behave impeccably, are always appealing, whether or not they are true. One of the earliest and most persistent of legends relating to Shakespeare’s life is the deer-poaching episode supposed to have taken place at Charlecote when he was a young man. Another is the lovely story of how Shakespeare and Richard Burbage competed for the favours of a female playgoer, and how Shakespeare got in first, sending Burbage the witty message that “William the Conqueror came before Richard III”. And don’t we all rather like the fact that Anne Hathaway was several months pregnant when she and Will were married?

Last week I spotted a new post in the Folger Shakespeare Library’s Shakespeare Unlimited podcasts on the subject Shakespeare and the Tabard Inn. It’s presented by Martha Carlin who has discovered, among papers at the University of Edinburgh, a reference to Shakespeare and his friends carving their names into the wooden panelling of the Tabard Inn in Southwark, from which Geoffrey Chaucer’s pilgrims began their journey in The Canterbury Tales.  She tells the full story in the podcast, but it was also published in 2014 by the Times Literary Supplement.

The reconstructed Tabard Inn during the 1800s

An anonymous antiquary, writing around 1643, described the borough of Southwark, in his “Some notes for my Perambulation in and round ye Citye of London for six miles and Remnants of divers worthie things and men”. The twenty-seven pages of manuscript are now kept at Edinburgh University Library (MS La. II 422/211). The author mentions “those Stews so long a source of profitt to ye Maiers of London and Bishopps of Winchester ye Bear Gardens and Playes”. At the time he was writing The Tabard was a respectable inn, frequented by the Mayor, Sherriffs and Aldermen of the City when on official business, and he writes “The Tabard I find to have been the resort Mastere Will Shakspear Sir Sander Duncombe Lawrence Fletcher Richard Burbage Ben Jonson and the rest of their roystering associates in King Jameses time as in the lange room they have cut their names on the Pannels.” 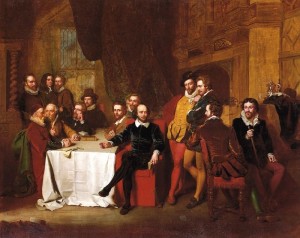 John Faed’s Shakespeare and his Contemporaries, 1851

This certainly sounds plausible, though history is littered with forged Shakespeare documents and caution is always needed. The subject is a familiar one: John Faed, in 1851, painted a fanciful group portrait of Shakespeare and his contemporaries at the Mermaid Inn, another popular drinking place. The rather proper group could hardly be called “roystering”, nor do they look as if they might have been carving graffiti on the panelling, but actors and other theatrical people have always gathered sociably in bars after performances. The Tabard Inn suffered the same fate as many of London’s buildings, burning down in 1676 when Southwark had its own fire just ten years after the Great Fire of London. Although subsequently rebuilt the panelling did not survive.

For now, Martha Carlin is clearly on the trail of the mysterious antiquary who wrote the manuscript. Who was he, and why was it never completed? There’s no explanation of how it came to be at Edinburgh University Library, but as the obvious resources have been exhausted documents that mention Shakespeare are occasionally turning up elsewhere, found by people who are looking for something else. This was the case with this one.

The manuscript featured in this podcast episode will be exhibited January 20 – March 27, 2016, at the Folger Shakespeare Library, as part of Shakespeare, Life of an Icon.

And if you haven’t come across them yet, do take a look at the Shakespeare Unlimited podcasts. They’ve been appearing for about a year, and cover a wide range of subjects, discussed by a variety of academics and Folger Shakespeare Library staff. These include Shakespeare and Punk Rock, The Shakespeare Moons of Uranus, Shakespeare’s Street Fighting and Shakespeare’s France and Italy.