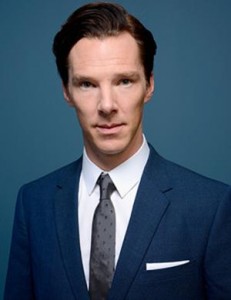 By the time this post goes live, the latest production of Hamlet to be staged in London will have received its first two performances. I’m writing of course about Benedict Cumberbatch’s Hamlet at the Barbican Theatre.

It was to be expected that comments would appear immediately on social media, and within minutes of the curtain coming down on Wednesday I received a tweet with photo of the curtain call describing it as “playful and electrifying”. By Thursday morning the online versions of The Times and The Mail had published reviews way in advance of the 25 August press night, and this ignoring of convention has created yet more media attention.  Paddy Smith, writing in The Stage Online has described the reviewing of this production on the strength of the first preview as “the first ill-thought step on to the scree slope clearly marked: ‘Danger! Race to the bottom’.”

It was first announced back in September 2013 that the actor, most famous for being Sherlock on TV, was in advanced discussions about playing Hamlet. It was almost another year, August 2014, before tickets went on sale. It became officially the fastest-selling ticket in London theatre history. Apparently all 100,000 tickets sold out within hours, with at one point the online queue reaching over 30,000. The anticipation has even outstripped that for David Tennant’s Hamlet, then playing Doctor Who, at the Courtyard Theatre in Stratford in 2008.

As with Tennant, it would be a mistake to call this merely celebrity casting. Cumberbatch has built a solid career on stage. Patronising remarks have been made about the audience: will the Cumberhordes behave appropriately at the theatre? There was some concern about this with David Tennant too, but audiences were respectful and well-behaved as well as enthusiastic. I saw it three times and never noticed any inappropriate behaviour. Cumberbatch has made a career of playing introverted geniuses so it seems unlikely his admirers will be fazed by Shakespeare, and they won’t want to miss a thing. This article reinforces the point about them.

At the Barbican they are anticipating hysterical fans besieging the stage door, and have written to ticket-holders to tell them that Cumberbatch will not be receiving gifts, nor will he be signing autographs. He will be spirited away through one of the Barbican’s many exits, probably while most members of the audiences are still in the auditorium. There are rumours that tickets are being sold for outrageous amounts online, and efforts are being made to prevent touts. Then there are the stories about the audiences: one lady from rural Wisconsin is leaving the USA for the first time to see Cumberbatch. Will this also, I wonder, be her first experience of Hamlet, or Shakespeare? There’s a lady from Manila in the Philippines who’s expecting it to be a life-changing experience, and a 10-strong group of Japanese fans are coming over in October for this “once-in-a-lifetime opportunity”. 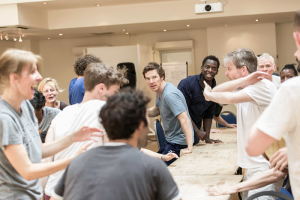 The Hamlet 2015 company in rehearsal

Amidst all the hype, let’s not forget that this isn’t a one-man celebrity appearance, but a production of the world’s most famous play. A strong cast has been assembled by the director Lyndsey Turner including Anastasia Hille as Gertrude and Ciaran Hinds as Claudius. In spite of the emphasis on Hamlet himself, the play is a company piece and is always better when there is strong support from other actors.

Cumberbatch seems to be a level-headed man, but how can anybody hope to live up to this level of expectation? Here, the voice of experience, Michael Billington, reassuringly notes that “no actor can fail as Hamlet”. He reminds us that Cumberbatch has had many years of acting in which to acquire the skills for the role, and quotes Max Beerbohm’s description of the role as “a hoop through which every eminent actor must, sooner or later, jump”. But he prefers Oscar Wilde’s statement: “In point of fact there is no such thing as Shakespeare’s Hamlet. If Hamlet has something of the definiteness of a work of art, he also has all the obscurity that belongs to life. There are as many Hamlets as there are melancholies.”

He continues: “We don’t just go to see a star performer: we go to see a play. Elsinore, for instance, is no longer a shadowy backdrop but a crucial part of the experience: in countless productions, including those by Yuri Lyubimov, Richard Eyre and Nicholas Hytner, it has become a network of sinister espionage. ” 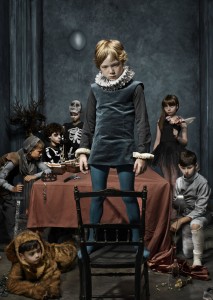 One of the advance shots for the Barbican Hamlet 2015. What are we to read into this?

“Hamlet himself is also increasingly defined by his relationship to the surrounding characters: in recent productions, Patrick Stewart’s shrewdly pragmatic Claudius, Pippa Nixon’s tragically abused Ophelia, Imogen Stubbs’s drink-driven Gertrude have come into just as sharp a focus as the protagonist. I hope that when Lyndsey Turner’s Barbican production is officially unveiled to the press, it will not be judged simply as a test of Cumberbatch’s classical skill: Frankenstein alone proved he had the lungs for the part. It will also, I trust, be seen as a play with a profoundly mysterious hero, who, as Wilde said, has all the obscurity of life.”

The production runs until 31 October, but all is not lost if you don’t have a ticket. Thirty £10 tickets will go on sale every morning, but people are camping out all night for these. So thank goodness for the live relay from the Barbican Theatre to cinemas on 15 October, with Encores following at various dates.

One Response to Jumping through the hoop: Benedict Cumberbatch’s Hamlet