Shakespeare with a twist 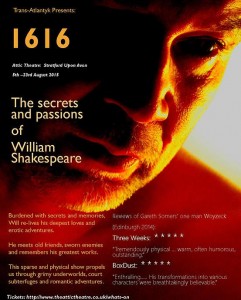 Shakespeare in Stratford isn’t just about the RSC and in fact the town has a number of venues, and several theatre groups, performing a wide range of drama including some by our very own playwright. Sometimes, too, we see plays that put a bit of a twist on Shakespeare and his plays.

One new piece being performed in Stratford at the moment on the subject of Shakespeare’s life. is Gareth Somers’ one-man show 1616: The secrets and passions of William Shakespeare at the Attic Theatre in Stratford from Wednesdays to Sundays until 23 August 2015.

I haven’t seen it myself (yet) but have heard good things about it, and here’s the description from the Attic Theatre website: A poetic and physical one-man performance that sees Shakespeare re-live his own dramatic, grimy, romantic, humorous and poetic life story.

The poet, actor, lover, betrayer, moneylender and ‘king’s man’ conjures a final audience to pick through the ‘rinds and fruits’ of his life.  He revisits the people, passions and politics that formed his life, art and wealth. Turning his acute perception and wit towards his own fears and works  Will wonders if he has any lasting legacy and asks where true value, duty  and love ultimately lie.

Following his one man Woyzeck at Edinburgh 2014 and after playing playwright Christopher Marlowe, Actor Gareth Somers brings the same versatility, skill and energy to play Shakespeare and his old friends and adversaries in a mesmerising performance of this lyrical and enlightening new play.

You can hear a podcast of Gareth Somers talking about it on Radio 4’s Front Row here. There’s information about Gareth Somers and his work here.  This is the link to the Attic Theatre for tickets.  Performances are on Wednesdays, Thursdays, Fridays and Saturdays at 7.30 and on Sundays at 5pm until 23 August. 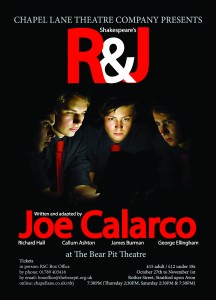 This summer I’ve managed to completely miss the Chapel Lane Theatre Company’s performances of Joe Calarco’s R&J that were first performed at the Bear Pit Theatre in London and subsequently transferred to the Tabard Theatre in Chiswick. The play, originally written about twenty years ago, involves the reading of Romeo and Juliet by a group of teenage schoolboys, looking at how their emotions is revealed, and their relationships develop, through reading the play. It’s been widely reviewed and received some great feedback here and here. This new company is proving to be a great addition to Stratford’s active theatre scene so do look out for their next production.