The Battle of Waterloo: a Shakespeare connection

William Sadler’s painting of the Battle of Waterloo

2015 is a good year for centenaries. 800 years on, Magna Carta is probably the most important of these, and towards the end of October we’ll be celebrating 600 years since the great victory of Agincourt. Both of these have Shakespearean resonance, but the third important centenary this year, the 1815 Battle of Waterloo, had no obvious link with Shakespeare.

Then, over Heritage Open Weekend I went to the Shakespeare Centre for their archives exhibition, and spotted an item that I’d only read about before. It was a small book, published in Stratford-upon-Avon in 1819, written by Mary Hornby. It was a play, entitled The Battle of Waterloo: A Tragedy.

Mary Hornby was for a number of years in charge of Shakespeare’s Birthplace. She was distantly related to Shakespeare’s being a cousin of the Harts who descended from his sister Joan. During her period of care, the number of Shakespearian relics multiplied and she was eventually forced to leave the Birthplace, setting up shop, with the relics, across the road. 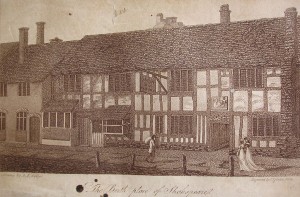 Few seem to have had a good word for Mary Hornby. In his Guide to the town published in 1814 Robert Bell Wheler very nearly omits to mention the Birthplace at all, while waxing lyrical about other buildings. The most famous account of Mary Hornby comes from the polite but humorous American writer Washington Irving, who visited in 1815.

The house is shown by a garrulous old lady, in a frosty red face, lighted up by a cold blue anxious eye, and garnished with artificial locks of flaxen hair, curling from under an exceedingly dirty cap. She was peculiarly assiduous in exhibiting the relics with which this, like all other celebrated shrines, abounds…

I am always of easy faith in such matters, and am ever willing to be deceived, where the deceit is pleasant and costs nothing… and on this occasion I went even so far as willingly to believe the claims of mine hostess to a lineal descent from the poet, when, luckily, for my faith, she put into my hands a play of her own composition, which set all belief in her consanguinity at defiance.

A few writers were kinder. W T Moncrieff’s 1824 Excursion to Stratford upon Avon included the recently-published account of a Miss Hawkins rather than that by Irving. Her description of the Birthplace is familiar: “the walls, ceilings, and every part, covered with signatures of visitors; various articles of Shakspeare’s property: – his chair in the chimney corner, – the matchlock with which he shot the deer”. Mrs Hornby “appears very singular in mind. She writes and prints plays and verses of her own composition. From the newspapers she has made a Tragedy of the Battle of Waterloo, the queerest thing imaginable…But her innocent conceit is the most curious circumstance of her character. She talks of her performances with wondrous approbation; she says she composes whenever she cannot sleep…She writes a fair hand, and in her style of speaking there is no predominant vulgarity… I bought her play…She said she had never been in London. She spoke with pleasure of seeing Shakspeare’s plays, but with no discrimination”.

In her preface, Mary Hornby writes: “The following pages were originally written in detached parts, in the same room which gave birth to my great Predecessor, the immortal Shakspeare”… I now send this little work forth, with “all its imperfections on its head”, – humbly imploring, from an indulgent Public, that kindness which an unprotected Female never asked in vain.” 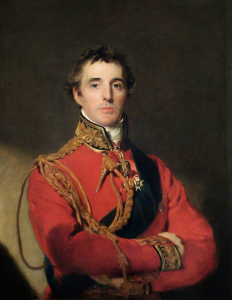 The Duke of Wellington

Mary was clearly familiar with Shakespeare’s plays, particularly Henry V. Her account of the battle is reminiscent of Shakespeare’s scenes at Agincourt. In particular, the Duke of Wellington’s speech to his troops before the battle in Act 5 has a distinctly Shakespearean ring:
“My valiant soldiers, there is not one of us, who, pending the issue of the great emprise, may find a grave of glory on the eventful day, of whom the world (save the bold enemy) wou’d not be proud to say, the greatest heroes were the heroes slain. I see your noble valour, darting, like lightning, from the indignant eye! As the girth’d courser when the trumpet sounds, now summon quick your wonted courage up, and shew to all th’admiring nations round, that you are men of the true English blood, deserving well the lofty name you bear – surpassing even your brave ancestors, in deeds of bravery!”.

It’s easy to criticise Mary Hornby’s unsophisticated work, and she herself was an easy target for Irving’s skilful pen. Perhaps his description is a little unfair, given Miss Hawkins’ more charitable account of the poor widow, writing “a fair hand” and with “no predominant vulgarity”. She may have been eccentric, but was far from illiterate, having read and appreciated Shakespeare’s plays. She took newspaper accounts of the battle and the events leading up to it and shaped them into a play, clumsy though it is. It was also rare for any woman to write or publish anything in the early nineteenth century.

Wellington’s victory against Napoleon’s forces on 18 June 1815 was close, but decisive. Within days of the battle Napoleon abdicated, and soon surrendered. It was the end of more than twenty years of conflict with the French, and a source of national rejoicing. Hornby’s play closes with the Duke of Wellington mourning those who died in battle, and it was indeed one of the bloodiest in military history. 15,000 British soldiers died, and 8,000 Prussians, while Napoleon’s army lost 25-26,000, a total of nearly 50,000 dead and thousands more injured.

Mary Hornby’s “little work” then honours the memory of the Battle of Waterloo and links it with the history of Shakespeare-worship in Stratford-upon-Avon.

2 Responses to The Battle of Waterloo: a Shakespeare connection