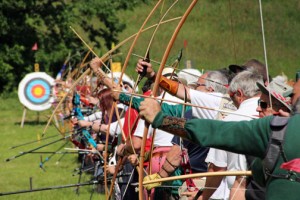 A reconstruction of the Battle of Agincourt

Today, 25 October 2015 is the day history and Shakespeare-lovers have been waiting to celebrate: the 600th anniversary of the Battle of Agincourt. Here again is the website that is coordinating today’s activities.   Here’s Dan Spencer’s account of what actually happened on the day.

On Thursday 29th October at 12 there will be a service of remembrance at Westminster Abbey, details here.

Getting back to Shakespeare’s version of events, Radio 4’s Today programme on 24 October broadcast an interview with Anne Curry, professor of Medieval History at the University of Southampton and co-chair of the Agincourt Committee, and Adrian Noble, theatre director and chief executive of the Royal Shakespeare Company from 1990 to 2003. Noble reminisces about Kenneth Branagh’s first performance of the role in Stratford in 1984, and the piece features Branagh doing the “Once more, unto the breach” speech. Being pernickety, I should mention that this speech isn’t actually delivered at Agincourt, but at the siege of Harfleur.  The interview begins about 1 hr 20 minutes in.

Enjoy the day, however you choose to celebrate it!