In the City of London 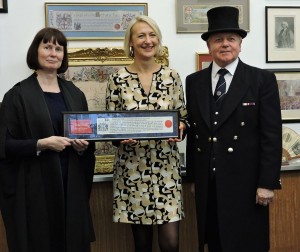 Sharon Little, Freeman of the City of London, with her certificate and officials

This week I visited London’s Guildhall where my niece was granted the Freedom of the City of London. I hadn’t realised that about 1800 Freemen are admitted each year by the Clerk to the Chamberlain of the City of London, and “whilst the Honorary Freedom is indeed a recognition of lifetime achievement or high international standing, the Freedom of the City of London is open to a much wider section of society, and include many who have achieved success, recognition or celebrity in their chosen field….gained through membership of a livery company or by direct application suitably supported by a suitably qualified proposer and seconder.”

It was very special to attend this historic ceremony at which those receiving the Freedom read the oath and sign the register before being given their certificate. This ritual dates back to 1237, and nowadays it takes place in a room containing amazing memorabilia including Horatio Nelson’s glorious Freedom and the box that contained Florence Nightingale’s certificate. 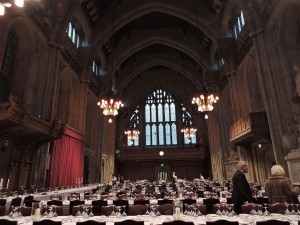 The Guildhall was built between 1411 and 1440 during the reign of Henry IV, and although now dwarfed by skyscrapers the Great Hall is still a magnificent building where events of national significance are held. The roof of the building has been rebuilt at least twice, after the Great Fire of 1666 and again after the Blitz. It’s the only non-ecclesiastical stone building to have survived, and below ground the medieval crypt still exists.

The medieval trade guilds wielded great economic and social power and their members took the most important positions in the community: the burghers, aldermen and the Lord Mayor came from their ranks. The guilds became official Livery Companies, named after the uniforms they wore for ceremonies. The arms of the twelve great Livery Companies of the City of London: the Mercers, Drapers, Fishmongers, Goldsmiths, Skinners, Merchant Tailors, Haberdashers, Salters, Ironmongers, Vintners and Clothworkers, are still represented in the Great Hall today and there are now over 100 Livery Companies.

Many historic trials have taken place in the Great Hall, including that of Archbishop Thomas Cranmer in 1553, of Henry Howard, Earl of Surrey, a friend of the poet Thomas Wyatt in 1547, and of Henry Garnet, implicated in the Gunpowder Plot in 1606. Garnet was waiting at Coughton Court, just a few miles from Stratford-upon-Avon, when the news of the plot’s failure was brought from London. 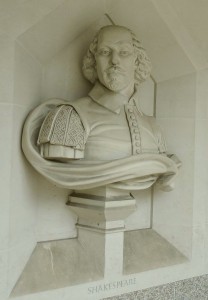 There are of course Shakespearean associations. A bust of Shakespeare stand outside the Guildhall Art Gallery, honouring his achievement (though the City frowned on the public theatres where Shakespeare made his name). In the plays themselves there are a number of references: during the Cade rebellion of Henry VI Part 2 Cade declared himself Lord Mayor of London and held a sham trial at the Guildhall at which The Lord High Treasurer was condemned and later executed.  In Henry VIII, the Lord Mayor of London attends the coronation of Anne Boleyn. After Henry V’s successful battles in France, the Chorus tells us
How London doth pour out her citizens.
The Mayor and all his brethren in best sort,
Like to the senators of th’antique Rome
With the plebeians swarming at their heels,
Go forth and fetch their conquering Caesar in.

Probably the most memorable mention of the Lord Mayor of London is in Richard III, where Richard tries to get the City’s support for his claim to the throne. Richard tells Buckingham to meet the Mayor and citizens at the Guildhall. Buckingham reports back: instead of cheering in favour of Richard the citizens remained silent. The Mayor then spoke, and “when he had done, some followers of mine own/ At lower end of the hall, hurl’d up their caps”. The Mayor, a rather ineffectual figure, is eventually persuaded to endorse Richard’s claim. 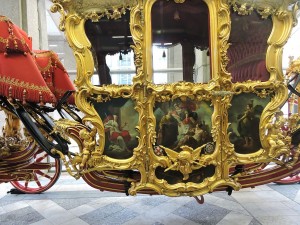 A detail of the current Lord Mayor’s coach

In the medieval period the Lord Mayor of London rivalled the power of the King, and it was important that each new Mayor swore allegiance to the crown. The Lord Mayor’s Show, a procession from the City to Westminster and back has its origins in this ceremony.  Shakespeare must have seen this grand piece of pageantry: William Smith, a haberdasher, described the procession in 1575:

The day of St Simon and St Jude the Mayor enters into his state and office. The next day he goes by water to Westminster in most triumphant-like manner. Next before him goeth the barge of the livery of his own company, decked with their proper arms; and then the Bachelors’ barge and so all the companies in order every one having their own proper barge with the arms of their company. And so passing along the Thames he landeth at Westminster, where he taketh his oath in the Exchequer before the judge there: which done he returneth by water as aforesaid and landeth at St Paul’s Wharf where he and the rest of the Aldermen take their horses and in great pomp pass through Cheapside.

This year, 2015, is the 800th procession taking place on 14 November. It will be a magnificent piece of pageantry, the three-mile procession taking an hour to pass, and the river Thames still playing its part: at 9am the Lord Mayor will arrive in the city in the Queen’s state barge.

One Response to In the City of London