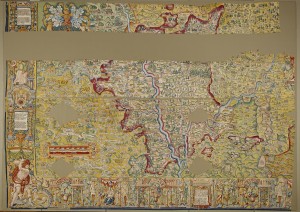 The Sheldon tapestry map of Worcestershire

Maps come in many shapes and sizes. It’s still a miracle to me that my smartphone can show me exactly where I am, but maps have always done more than just give us an image of the world around us.

This website gives examples of a whole range of maps that show how the English language has evolved and moved around the globe. The first one shows how languages relate to each other using the image of a branching tree. The UK’s long history of being conquered and colonised by Romans as well as Northern Europeans has had a huge influence on words and place names, shown in map 3, and map 5 illustrates how the Norman conquest still affects our vocabulary. The version of French that evolved became the language of the ruling classes, many of the 10,000 words added still being in use, often as military or legal terms. Norman words were often longer, and posher, than the Anglo-Saxon words used by the English: “perspire” rather than “sweat”, for instance.

English was undergoing massive change during Shakespeare’s time, one of the reasons why his language is so dynamic. He used words from a whole variety of sources, nuances such as those relating to class often passing us by. Learners of English must always wonder why so many syllables that look the same are pronounced differently, explained in Map 6 by “The great vowel shift” that took place during Shakespeare’s lifetime. And if you’re interested in the size of Shakespeare’s vocabulary, there’s a map of that too, in which Shakespeare’s vocabulary is shown to be smaller than that of some modern rappers. 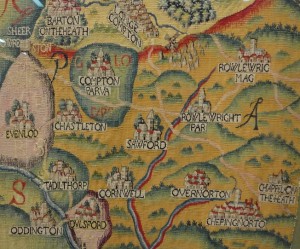 Part of the Sheldon map of Worcestershire, showing a corner of Oxfordshire

The site is good fun and a reminder that maps can convey all sorts of information. They can also be created from all kinds of material. With the revamping of Oxford’s Bodleian Library they are now able to display one of their great treasures, a Sheldon tapestry map. Ralph Sheldon lived near Long Compton, and during the 1590s commissioned four great maps depicting counties in the Midlands. The one on display is of Worcestershire, a county close to Warwickshire, showing places that Shakespeare had certainly heard of and probably visited such as Tewkesbury where the Avon joins the River Severn.

For us the map is a thing of great beauty and antiquarian interest, but the Guardian article comments that “it was made when few people had ever seen even a paper map- …Sheldon would certainly have had to explain to most visitors what a map was and how to read it…Towns and villages, rivers and streams, beacons and windmills, stone and timber bridges, spires and square stone towers, forests and orchards, castles and cathedrals”. Text is also embroidered onto the map. Worcestershire is still a county famed for its fruit orchards, and one section reads ““hear goodly orchards planted are in fruite which doo abounde. Thine eye wolde make thin hart rejoyce to see so pleasant grounde.”

The map also records a mysterious event, when a piece of land “was dryven downe by the removyng of the ground”. It was a mystery to the staff at the Bodleian until a resident of Ross-on-Wye responded to the Guardian’s article. Over three days in February 1575 “approximately 60,000 cubic metres of land moved downhill, carrying full-grown trees to an adjoining property.” This event, probably caused by an earthquake, was famous, and startling enough for it to be recorded on the tapestry map made a few years later. According to the letter, the site is still recorded on Ordnance Survey maps. This website too records that the Kynaston yew tree, moved sixty feet during the landslip, is still alive.

It reminds me of that scene in Henry IV Part 1 where Owen Glendower tries to impress Hotspur with his influence over the natural world: “At my birth/ The frame and huge foundation of the earth/ Shaked like a coward….I say the earth did shake when I was born…The heavens were all on fire, the earth did tremble”. 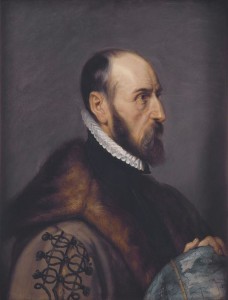 The Sheldon maps combine the skills of the map-maker with those of the embroiderer. This website, The Renaissance Mathematics, contains lots of great information about the famous cartographers of the sixteenth century, Abraham Ortelius and Gerard Mercator. Ortelius was born in Antwerp in 1527 and became great friends with Mercator, accompanying the older man on some of his trips. Instead of issuing single maps, Ortelius came up with the idea of printing a whole series of maps in a single volume, using the work of a number of different cartographers. His Theatrum orbis terrum was first published in 1570 and went through forty editions in the next 55 years. It opened people’s eyes to parts of the world far from their homes. Mercator’s superior work, entitled an Atlas, was published in 1595, after Ortelius’s work had become an established best-seller. There’s much more on the site including many illustrations. Shakespeare was very much aware of maps, using them as props in several plays, notably the scene quoted above when Glendower and the other plotters argue about how to divide the Kingdom once they have deposed the king, and in King Lear where the legitimate monarch tries to do the same thing for his daughters. In Shakespeare’s plays, maps seem to appear before disaster strikes. Fortunately for us, we can just admire their beauty and the insight they give us into another world.