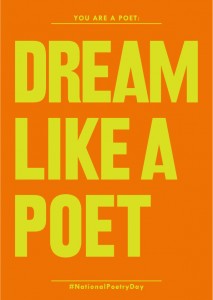 Thursday 8 October is 2015’s National Poetry Day, “the annual mass celebration of poetry and all things poetical”. This year is extra special because this is its 21st anniversary. You’ve still got a few days to write a poem or decide which of the many events you’re going to attend.

The day is coordinated by the Forward Arts Foundation, an organisation that celebrates and promotes poetry for everyone. We’re so driven by what they’re calling the “tyranny of prose” that they want to encourage people to think and express themselves more imaginatively. This year’s theme is light, and people around the country are being inventive. In Bristol Liz Brownlee is getting the city’s light workers – including an astronomer, a firefighter, a cosmologist, a fire-eater, to read poems about light that will be displayed on a screen in the city.

There will be read-a-thons and impromptu readings in many locations including schools, libraries and offices, as well as more obvious places. In London the Poetry Society and Southbank Centre will be running a day of illuminated poetry readings managed by Young Producers aged between 18 and 25 while there will be an afternoon of free readings at the Royal Festival Hall. 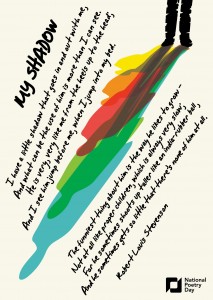 The Scottish Poetry Library is planning lots of events and has created a series of light-themed poetry cards like the one illustrated, of Robert Louis Stevenson’s poem My Shadow.

Everybody is being invited to “Make Like a Poet” by creating their own response to the day in words or images, or both. The best responses will be blazed across Blackpool’s famous lights on the day.

The Poetry Society is inviting people to write a poem for 2016, the 400th anniversary of Shakespeare’s death, a response to any of Shakespeare’s sonnets. This will form part of the Society’s celebrations next year, but the closing date for the poems is 23 October 2015.

BBC radio is going all-out to mark the day this year, with programmes relating to it on four national radio stations. The Radio Times says “while the airwaves will be full of poets and performers, proprietors of power stations and lighthouses, opticians, photographers and firework-makers will also be making contributions”.

Radio 2 features several poetry-themed programmes, including, at 5pm, Simon Mayo talking to Erik Didriksen who has written a book in which he reinvents pop songs in the style of Shakespearean sonnets. At 1pm on BBC 6 Music Mark Radcliffe and Stuart Maconie interview poets John Cooper Clarke and Jo Bell, and on Radio 3 the poetry begins as early as 6.30 am. After spending most of the day playing music there’s what should be a fascinating discussion by Matthew Sweet and guests of Walt Whitman’s Leaves of Grass at 10pm.

As you might imagine, though, the prize goes to BBC Radio 4 which begins a series of no fewer than nine programmes under the title We British: An Epic in Poetry. Hosted by Andrew Marr the programmes will tell the story of Britain through its poetry. Beginning at 9am the series will end at 10pm, and by switching radio channels during the day you could actually catch most of the programmes, if you were really keen. The Shakespeare bit on Radio 4 will occupy the spots of 11.30 to 12 and 2.15 to 3, allowing plenty of time for a civilized lunch.

That’s most of my day taken care of then, and I can justify spending the time wallowing in verse because, as it happens, it’s also my birthday. Here’s one of my favourite passages on the subject of light from Shakespeare’s The Two Gentlemen of Verona where Valentine despairs at being banished from Verona, and his love:

What light is light, if Silvia be not seen?
What joy is joy, if Silvia be not by?
Unless it be to think that she is by
And feed upon the shadow of perfection
Except I be by Silvia in the night,
There is no music in the nightingale;
Unless I look on Silvia in the day, T
here is no day for me to look upon;
She is my essence, and I leave to be,
If I be not by her fair influence
Foster’d, illumined, cherish’d, kept alive.

If that’s all a bit sugary for you, here’s a very modern take on Shakespeare by rap artist Kate Tempest.