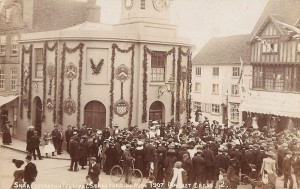 And now, a fanfare. Earlier this week I received my contributor’s copy of a new book entitled Shakespeare Jubilees: 1769-2014, edited by Christa Jansohn and Dieter Mehl, and published in Germany. More details of the publication, including the contents list, are here.

This is the description “The essay collection ranges from the elaborate celebrations in Shakespeare’s hometown to more modest festivities elsewhere; from ambitious, theatrical, and politically loaded demonstrations to nationally coloured, culturally distinct and idiosyncratic commemorations. The variety of ways in which geographically distant countries have remembered Shakespeare has never before been the object of a comparative study.  We hope that the essays in this collection will throw new light on Shakespeare as a shared international heritage.”

My own contribution is a chapter co-written with Dr Susan Brock on the subject of the history of celebrating Shakespeare’s birthday in Stratford-upon-Avon, one of four concentrating on the ways in which Shakespeare has been celebrated in Britain. The book had its starting point in the 450th anniversary celebrations of Shakespeare’s birth in 2014, in particular at the international conference in Paris in April that year.  When the book moves outside the British Isles and looks at Shakespeare on the world stage it becomes much more diverse and for me anyway, more interesting. There are several chapters about European celebrations, mostly in France and Germany, but also further east in Hungary and Bulgaria. Three chapters cover North American celebrations, another looks the less well-known commemorations in Latin America, one at New Zealand, and one each at Japan and China. 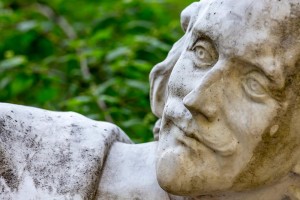 As yet I’ve had a chance for only a brief glance at this collection of essays. In Christa Jansohn’s own chapter Celebrating and Commemorating Shakespeare in Germany, she steps back for a moment to consider why humans need to celebrate, quoting Odo Marquand who wrote that man “is that eccentric being that cannot live without celebration”.  Marquand considered the celebration of anniversaries “offer an ideal backdrop for … sketching the model of the self one wants to present to the world”.  They serve to commemorate “the past”, and give “significance to the present” and the future.

The further question then, especially for non-English speaking countries, is “Why celebrate Shakespeare?” Germany in particular has many literary heroes of her own, but Jansohn lists a whole series of Shakespeare-themed events with a political or social aim. In the divided Germany, the German Shakespeare Society was also split into the Deutsche Shakespeare Gesellschaft in Weimar and Deutsche-Shakespeare Gesellschaft West based in Bochum. In 1964 the two societies, celebrating the Quatercentenary of Shakespeare’s birth, felt themselves to be in competition. The political edge seems to have been particularly strong in East Germany where, as well as putting on several Shakespeare productions and publishing a special Shakespeare stamp, the Town Council of Weimar renamed one of its streets “William-Shakespeare-Strasse”. Jansohn notes that since the fall of the Berlin Wall and reunification, enthusiasm has been waning. “Do Shakespeare and the German Shakespeare Society have a future in Germany and in Goethe’s Weimar in particular?” she asks. Interestingly, though, she notes that in 2013 the town council of Weimar unanimously decided to support the German Shakespeare Society to the tune of 20,000 Euros per year for 2014-2018. 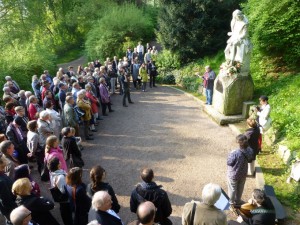 Choosing to commit such a large amount of public money to support a society promoting a foreign writer seems extraordinary for a local council. The German Shakespeare Society still aims “to keep the memory of the poet alive”, seeing this as helping to make “a considerable contribution to the international prestige of our City of Culture”.

The motives for celebrating Shakespeare anniversaries have probably never been straightforward. Going back to 1769, Garrick’s main aim was self-promotion. But it’s good to hold Marquand’s aim of commemorating the past and giving significance to the present and the future in mind. I’m very much looking forward to reading about the festivities and motivations of other Shakespeare celebrations worldwide in Shakespeare Jubilees 1769-2014.

One Response to Shakespeare Jubilees