Stratford and “the sere, the yellow leaf” 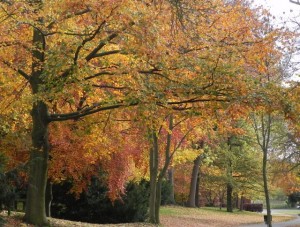 It’s that time of year when everything feels as if it’s shutting down. Days get shorter, nights colder, and once they’ve had their brief blaze of colour, leaves are gone from the bare branches.

The sense of things coming to an end is particularly strong this year with the passing of several Stratfordians I’ve known for years, including Patricia, one of Dr Levi Fox’s twin daughters, and more recently Pete Silver, the caretaker and security man at the Shakespeare Centre who remained devoted to Dr Fox and his family after retirement. Dr Fox, as Director of the Shakespeare Birthplace Trust, was responsible for many initiatives designed to protect the town’s Shakespearian heritage.

It’s been challenged many times over the past 400 years. For the first two hundred years after Shakespeare’s death nobody took a lot of care of buildings associated with him. In my researches into the town’s Shakespeare Club, founded in 1824, I’ve found that the Club quickly realised that they could not celebrate his the man’s achievement unless they also took responsibility for the environment in which he’d lived. Members promoted the building of the town’s first purpose-built theatre in the town in 1827, but its first major restoration project, the repair of the chancel and Shakespeare’s tomb in the church followed in the 1830s. They then moved on to the Birthplace which had been allowed to deteriorate. The Club took a leading role in the Committee that ensured the building’s survival in 1847. 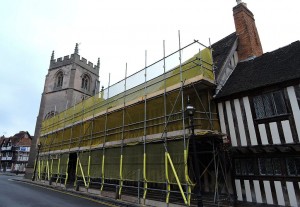 Looking at the town just now, tourists must be puzzled by the number of Shakespeare-related sites obscured by scaffolding and hoardings. Having completed work on its North porch, Holy Trinity Church is adding a vestry and toilet facilities on the south side. King Edward’s School is restoring the Guild Hall and the ancient schoolroom above. The Shakespeare Birthplace Trust is doing major work to redisplay the site of New Place, and the RSC is restoring the Swan Wing dating from 1880. It’s no coincidence that all these projects are going on now: all are intended to be completed during 2016, the quatercentenary of Shakespeare’s death.

Next year then we can look forward to seeing all these projects come to fruition and real improvements in the town centre. But this year there has been unease concerning the green spaces that surround the town. In early summer Rowley Fields on the edge of the Welcombe Hills hit the headlines when Stratford’s Town Trust revealed that they intended to sell the land for development. Although this particular area was not owned by Shakespeare, the hills are strongly associated with him and after a vigorous opposition campaign the Trust backed down. The land behind Anne Hathaway’s Cottage has been under discussion for years, and recently the Shakespeare Birthplace Trust announced its decision to sell Briar Furlong. This will allow a road to go through, and two housing estates will be built on adjoining land. This land was purchased by Dr Fox specifically to retain the Cottage’s rural setting and although I know there was logic behind the decision, to me it still feels wrong. 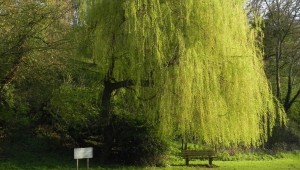 Elsewhere, an Avonside meadow just downstream from the church may be turned into a marina for several hundred boats. The path across the meadow and over Cross o’the Hill has existed since before Shakespeare’s time and several of the earliest views of the town were painted from it. And although it has no Shakespearian associations, the Greenway is a popular walking and cycle track taking people into the countryside that would be lost if it were turned back into a railway line, as is proposed. It’s harder to quantify the value of Stratford’s green spaces, though they give the town much of its character and the countryside of this area inspired Shakespeare’s love of nature.

But before while feeling life had “fall’n into the sere, the yellow leaf”, as Friday afternoon was fading I was taking a walk through Avonbank gardens when I came across two young women. They had visited the church where they had found themselves in tears at Shakespeare’s monument. One was from New Zealand, the other from Brazil, and both had just spent a month at Shakespeare’s Globe in London. They had been part of an international group of young people working on Shakespeare’s plays, and towards the end of their time they had performed extracts: one had played Juliet, the other Lady Macbeth. They had had the time of their lives, and the culmination of the month was a pilgrimage to Stratford to see where the man who had brought them together had lived and died.

Shakespeare spirit isn’t only to be found in the buildings we so carefully preserve, but in “this dear dear land”. We need to remember to tread softly in this place that is still the stuff of dreams.

2 Responses to Stratford and “the sere, the yellow leaf”